After a century since opening its doors to students in 1915, B.C.’s biggest university marked the occasion by recreating an iconic image known to students and the community around the world. 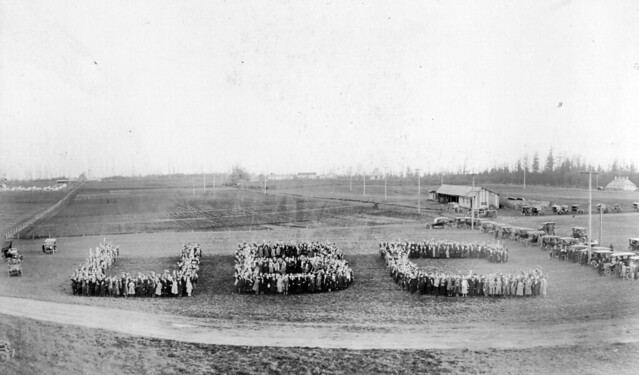 Students form a now-iconic image, spelling out ‘UBC’ on the Point Grey land.

The old black and white image was taken on October 28, 1922 at the end of the ‘Great Trek’, a march from the university’s Fairview campus at the current site of Vancouver General Hospital to the Point Grey site which was then undeveloped land. The Trek was a protest to the provincial government to supply the university with the funds needed to build a bigger and better campus in Point Grey.

But seven years before, the university was just getting started at its former home on the Fairview Slopes. In 1920, there were only about 1,200 registered students, but already too many to fit inside most of the school’s classrooms and lecture halls. 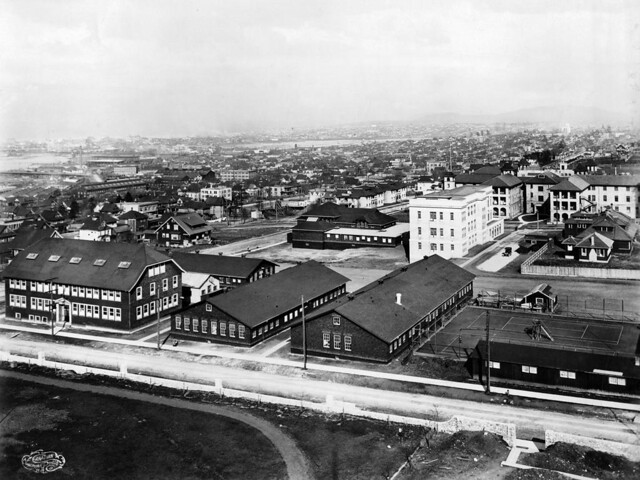 An aerial view of the Fairview Campus in 1919, located at the current site of Vancouver General Hospital.

Since its birth in 1915, UBC has been fighting obstacles and boundaries to remain relevant and one of the world’s best universities. Two World Wars which hurt both the university’s population and financial records marked UBC’s staggered growth at the beginning of the 20th century. Five years of free tuition during the First World War helped keep the university populated, but did not help financially.

Student and community pressure to build a new campus mounted in the early 1920s until the B.C. government finally decided to embark on a new chapter of education in the province. 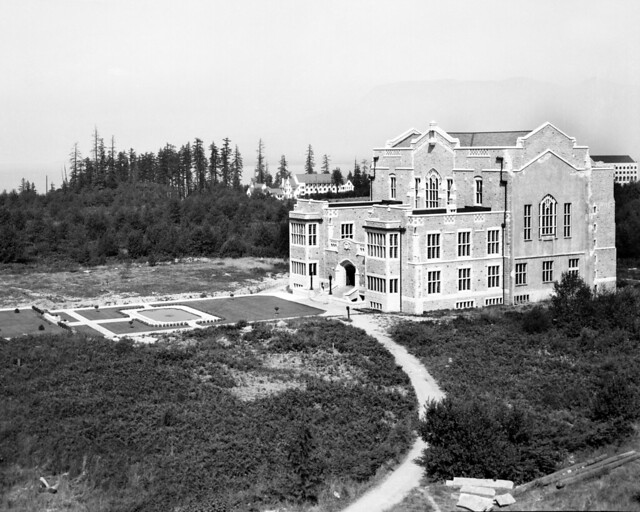 The Library with surrounding foliage and a reflecting pool in 1928.

The next few decades were spent fighting international crisis while trying to develop a campus. First the Great Depression stalled construction and plans and then World War Two put UBC in a whole new mindset to help fight the war at home and abroad.

The 1950s marked a new era of success for UBC as the university restarted its rapid expansion and growth from a couple buildings into a couple dozen. More money from the government and a broadening depth of academic studies began to shape UBC into a well-known institution. Events like the 1954 Commonwealth Games on campus and a visit from Queen Elizabeth II in 1959 marked the school’s international success. 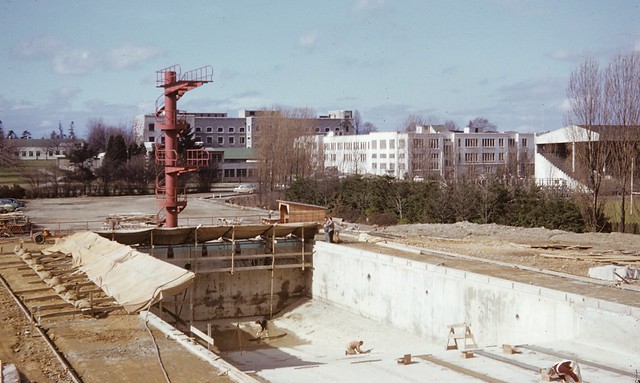 Empire Pool, UBC’s outdoor pool used in the 1954 Commonwealth Games, under construction in 1954. The pool was recently closed, but was a popular spot for students to attempt a high dive in their skivvies after dark.

Student life blossomed in the 1960s as the campus kept growing and attracting a diverse range of students. Numerous clubs like the Chinese Varsity Club and the Varsity Outdoor club kept students busy and social after class. But overcrowding at UBC forced the government to allow institutions like Simon Fraser University, the University of Victoria and BCIT to open. As a kind gesture, UBC even donated books and staff to SFU in order for them to set up their operations. 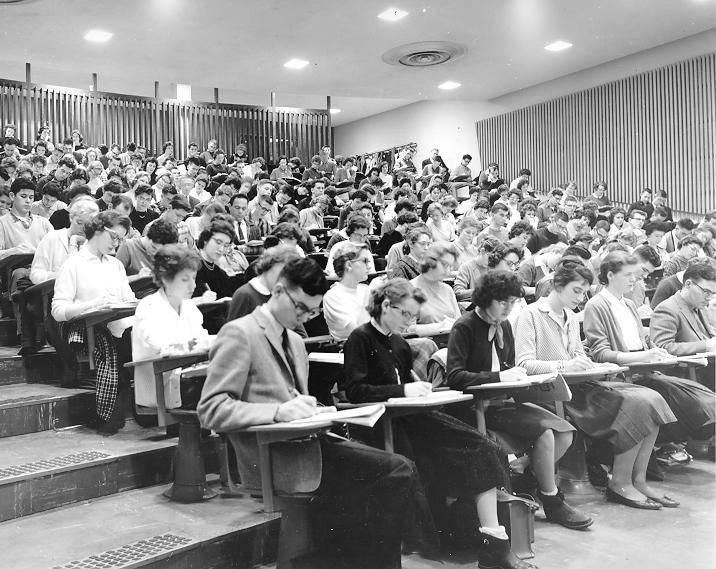 Students taking in a lecture inside the Buchanan building lecture hall in 1960. Students today still take classes in this room, but are treated to more comfortable seating.

Between the 1970s and present day, UBC settled itself as a world-leading institution and one of the most prestigious universities in Canada. Student life has included intramurals and recreation, fraternities and sororities, clubs, on-campus residence, annual parties and concerts and many more memorable traditions. Despite ongoing financial stress and seemingly endless leadership transitions, there is little doubt UBC will continue to change the lives of students, staff and faculty, and develop world-changing research, for another 100 years or more. 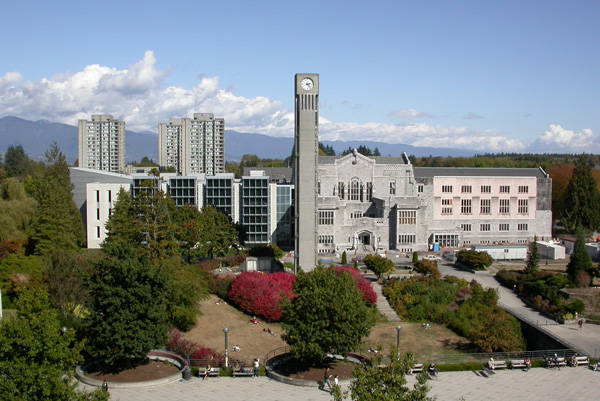 The Irving K. Barber Learning Centre half completed in September 2005.

“For one hundred years, UBC has attracted the best and brightest thinkers, researchers and scientists from around the world,” said Premier Christy Clark. “UBC has become a global presence, a source of pride to all British Columbians, and has been instrumental in driving positive change throughout the world.”

“It is my honour to lead UBC during its Centennial year and celebrate a century of excellence in learning, research and community engagement,” said Interim President Martha Piper. “UBC has risen from modest beginnings in 1915 to become one of the world’s leading universities, with an exceptional learning environment and outstanding research in the service of the people of British Columbia, Canada and the world.”

See photos and a timelapse video below of the UBC community recreating the iconic ‘UBC’ photo: 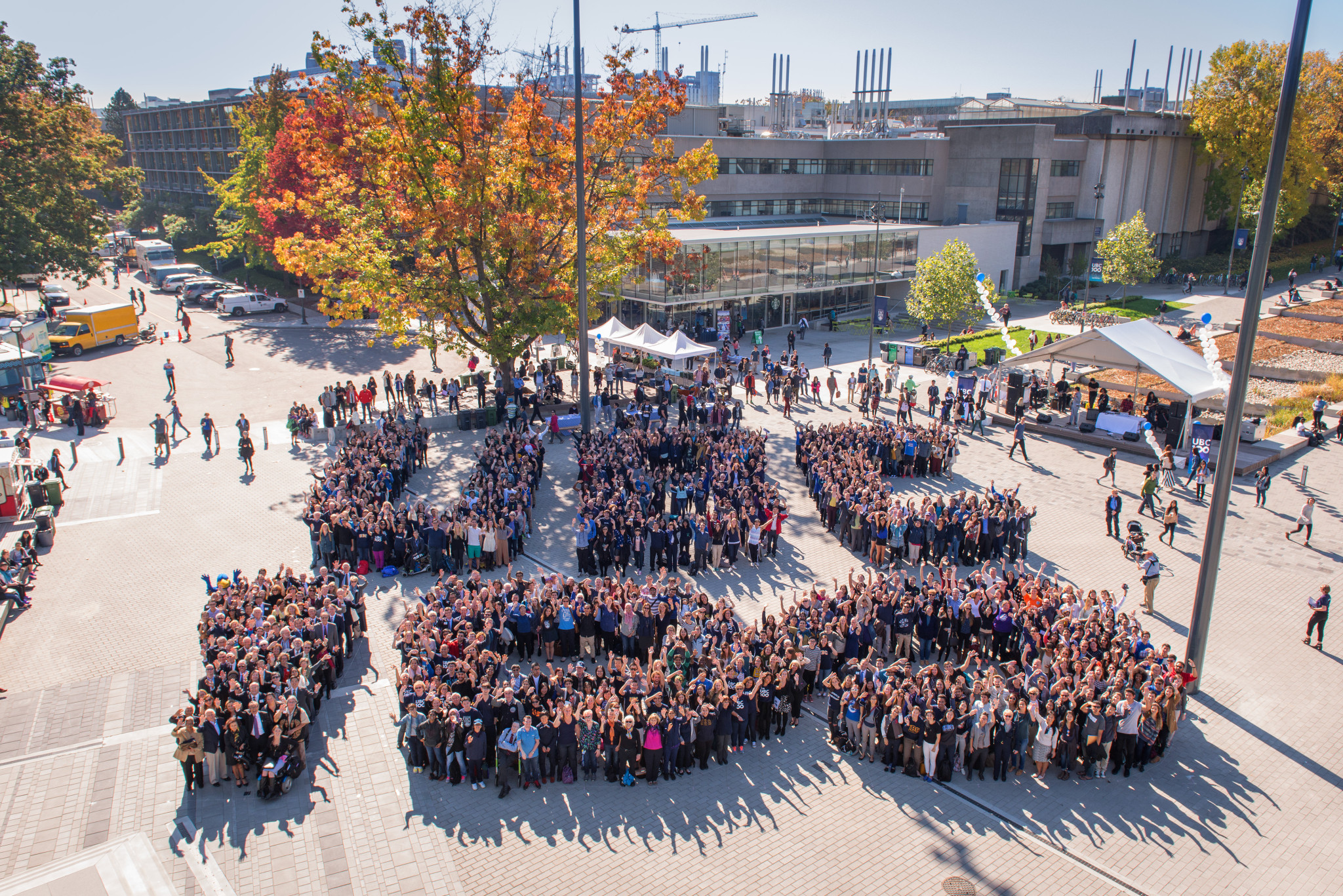