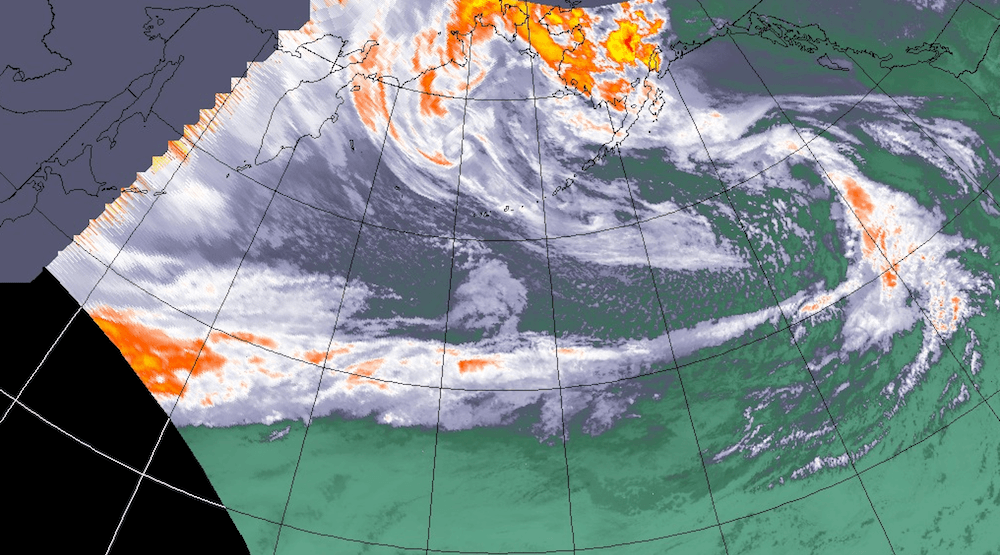 Three separate storm systems are set to hit Metro Vancouver and the rest of British Columbia’s South Coast beginning this Wednesday, and the trailing third storm will be the most potent as it is fuelled by the remnants of Typhoon Songda.

Satellite imagery and data from Environment Canada shows that the first storm will hit late Wednesday night and early Thursday morning. The second system will arrive Thursday night and last into Friday morning.

It is anticipated that Friday will be the calmest of the five-day wind and rain storm period – a parade of three low pressure systems.

The third storm, expected to arrive Saturday and last through much of Sunday, will be the most powerful as it is feeding on the remnants of Typhoon Songda. While the typhoon is currently in the West Pacific, it is moving northwards into the path of the jet stream which will shred and dismantle the cyclone.

The remnants of the typhoon will travel quickly through the jet stream and provide the third storm with significantly more moisture and wind power than the first two storms. As of today, Songda is a category 4 super typhoon with sustained winds of 185 km/hr and gusts of up to 260 km/hr.

From Wednesday through Sunday, more than 200 mm of rain could fall in the West and Inland areas of Vancouver Island while the inner coastal regions could see 100 mm. Even higher amounts are anticipated in and near the mountains.

Winds on BC’s South Coast may exceed 80 km/hr for coastal areas that are over exposed.

The upper elevations of Whistler Blackcomb could see nearly half a metre of snow on Saturday, and accumulations could continue throughout much of Sunday.

“As each storm develops and approaches the coast, details concerning the precise storm track and intensity will become clearer,” reads an updated statement by Environment Canada today. “Weather warnings will very likely be issued for multiple regions throughout the next several days beginning on Wednesday, as the first storm approaches.”

Power outages from branches falling onto hydro lines and localized flash flooding in low-lying areas are possible. Washouts could also occur near rivers, creeks, and culverts, and mountainside slopes could become unstable, increasing the possibility of rockslides and landslides.

A windstorm last week, from Thursday night to Friday morning, led to 32 power outages affecting 45,000 customers across the Lower Mainland.