UPDATE: The lineup has been announced. Here is the link to the amazing festival lineup:

When the 2014 Pemberton Music Festival was announced back in October 2013, Vancouverites got excited. In two days, the lineup for the music festival will finally be revealed.

Some have said it won’t be able to compete with this year’s top notch Squamish Festival lineup. Others questioned whether New Orleans-based Huka Entertainment would be able to manage and promote a festival happening over 4,000km away.

Will the festival, after taking so long to solidify its status, be able to draw any crowds at all? Or will it be as great as it was in 2008, when more than 40,000 people attended to witness history in the making? In 2008, the festival was headlined by Coldplay, the Flaming Lips, Jay-Z, Nine Inch Nails, Tom Petty and The Heartbreakers, and Tragically Hip. To this day, that lineup is a stellar lineup that would compete with any of the heavy-hitting music festivals like Coachella, Sasquatch! and Squamish. 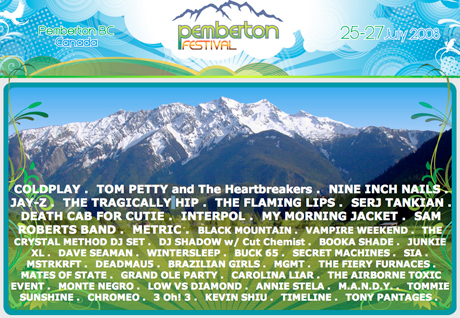 Will Outkast, who’ve confirmed 40 summer music festival dates, make the bill? They were left off the lineup at Squamish. Or perhaps the fake lineup that popped up a month ago will be accurate. 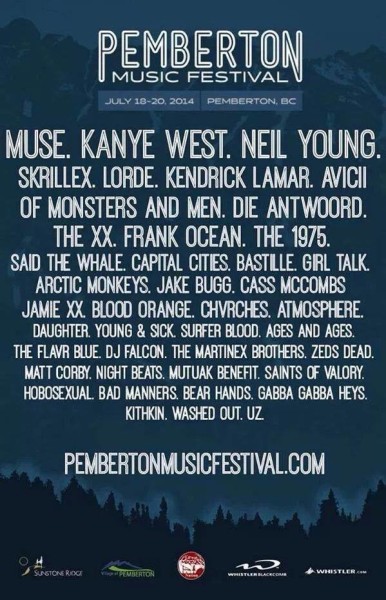 One thing is for sure, on April 8, the world will know who is on the Pemberton Music Festival lineup for 2014.

If you follow Pemberton Music Festival on Facebook, they have been counting down since March 29. Two days ago, they posted a message directed to Founders and Early-Bird Ticket Holders, “Keep a close eye on your inbox! A very special *sneak peek* opportunity is headed your way in the next few days.”

Our fingers are crossed for good news. We’ll let you know what it is as soon as we know.  Hit the comment section below and tell us who you think will make the cut for the triumphant return of Pemberton Music Festival 2014?