It is not well known considering how it is tucked into a rural corner of Metro Vancouver – out of sight and mind from much of the region’s population. Last year, Tsawwassen First Nation overwhelmingly approved major deals to build two large shopping centres on band land near the Tsawwassen B.C. Ferries terminal. One of these malls will be similar to the size of Burnaby’s Metropolis at Metrotown.

Construction by way of site preparation has begun since the project was approved. The two shopping centres do not require the municipality of Delta’s approval and are scheduled to be completed in 2015. The projects would not have been possible without the 2007 Tsawwassen First Nation Treaty which added 1,072 acres of the Agricultural Land Reserve (ALR) to the band’s reserve lands.

In total, both projects combined will total approximately 1.8 million square feet of of retail, entertainment, restaurant, and office space on an 182 acre site on Highway 17 and 52nd Street that was formerly a part of the region’s ALR.

The largest of the two shopping centres will be built by Ivanhoe Cambridge, the owners of Guildford Town Centre, Oakridge Centre, and Metropolis at Metrotown. Dubbed Tsawwassen Mills, it is slated to be a 1.2 million square foot indoor destination and will include space for 17 major retailers and close to 200 smaller retail shops and food concessions. It will follow the model of the massive CrossIron Mills in Calgary’s outer suburbs and Vaughan Mills just north of Toronto.

Tsawwassen Commons, the second mall on the band’s site, was proposed by Property Development Group and will be an outdoor shopping centre comprising of 600,000 square feet  of retail space including 3 major retail spaces, 8 mid-sized stores, and 12 smaller spaces for restaurants and small stores.

The Tsawwassen First Nation has additional plans to build 1,600+ residences and to turn another 350 acres of the former agricultural lands into an industrial park. The first phase of the new residential community next to the mall complexes is Tsawwassen Shores.

While these shopping centres (particularly the largest Metrotown-sized complex) are modeled after other successes including large destinations on the peripheries of Calgary and Toronto, the business models that led to approval should be put in question.

As they say, location is everything. The Tsawwassen site is located far away from much of the population, where population density is nearly absent. It is in a rural/agricultural area with the ocean on one side, First Nation land on the other, and the small suburb of Tsawwassen to the south.

There are also no vital transportation routes to support such large commercial destinations that will likely only offer the same retail choices also found in shopping centres conveniently located elsewhere in the region. It is nowhere near SkyTrain, the area has sub-par bus service, and Highway 17 goes nowhere and is not a major road route except to the ferry terminal and Deltaport.

More importantly, for relatively little economic return, the developments waste a large section of some of the country’s best farmland. Its location and design (think: lots of asphalt) will also further encourage urban sprawl and car use in the region; it completely goes against the region’s aims of density and sustainability.

Will you travel to Tsawwassen Mills and Tsawwassen Commons for shopping and entertainment? Do you think these two shopping centres will become underused “white elephants”? Let us know by commenting below. 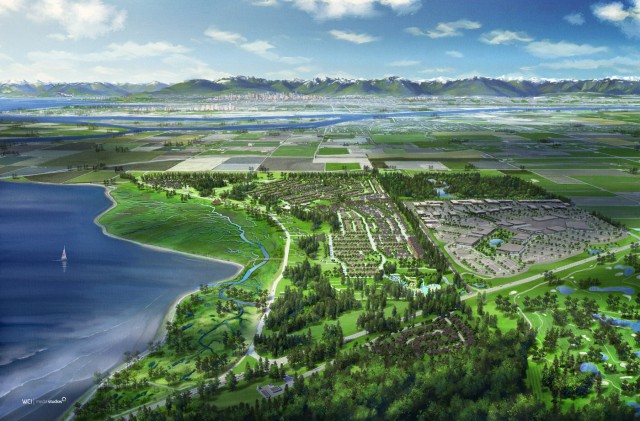