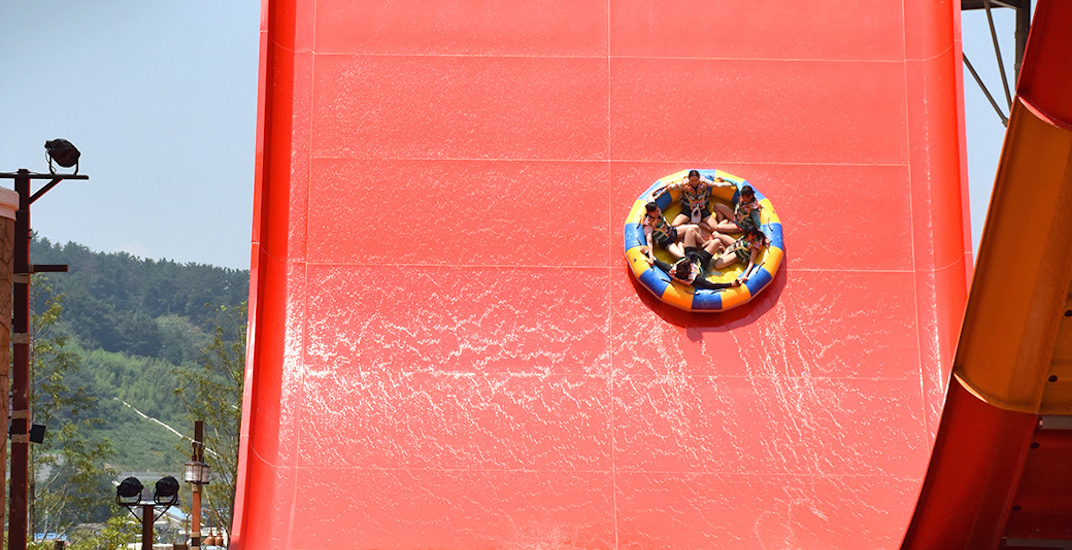 Thrill-seekers at Tsawwassen’s Big Splash Water Park will have the opportunity to try a brand new addition to the park, which is being billed as the first of its kind in Western Canada, beginning this weekend.

Known as the “Boomerango,” the slide begins with sliders entering an enclosed slide from the top of a 45-ft-tall deck, and as soon as they hit daylight there is a steep drop.

Harold Frederiks, the general manager for Big Splash, told Daily Hive that this leads straight towards a near vertical halfpipe-like wall several storeys high, followed by a reversal motion into the ‘rundown’ lane for the exit.

Two people can go down the slide at the same time as the Big Splash model of the design uses double-capacity inner tubes.

The slide gets its name from the boomerang-like motion experience of the slide.

“We’re absolutely excited about this addition, and you can count on me being one of the first people going down the slide when we’re ready to give it a test,” said Frederiks.

In celebration of the ride’s opening this weekend, the park will have an array of Boomerango-themed culinary options throughout the weekend, including Boomerango milkshakes and burgers, and Boomerango cocktails for adults. The park will even be renaming the Big Splash Burger the “Boomerango Burger” for the weekend.

Formerly known as Splashdown Park, the major water park near the Tsawassen Ferry Terminal was set to close after the 2016 season, but it remained open after Executive Group Development acquired the attraction.

Frederiks says Executive Group has made major investments into the water park’s facilities ever since taking over the property.

More information on Big Splash Water Park, as well as the new ride, is available online.