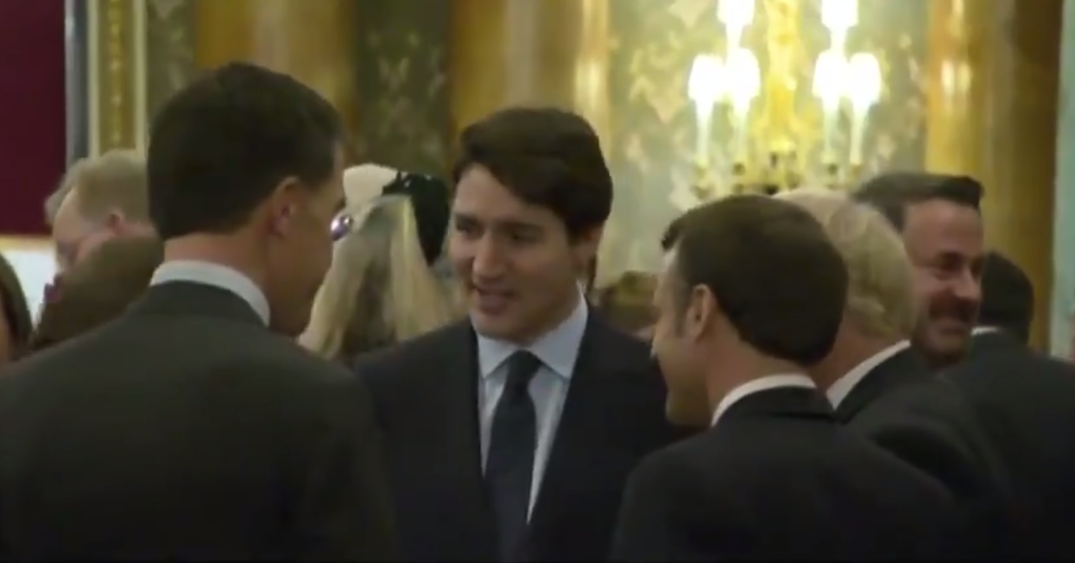 “Is that why you were late?” Johnson appeared to ask Macron, at the start of the 25-second clip.

Trudeau then replied, “He was late because he takes a 40-minute press conference at the top.”

While Trump is never mentioned by name, Trudeau’s response was reportedly about the president’s press conference earlier in the day.

The gossiping leaders did not seem to know their conversation was being recorded, as Trudeau continued to say, “you just watched his team’s jaws drop to the floor.”

.@JustinTrudeau, @EmmanuelMacron, @BorisJohnson and other VIPs shared a few words at a Buckingham Palace reception Tuesday. No one mentions @realDonaldTrump by name, but they seem to be discussing his lengthy impromptu press conferences from earlier in the day. (Video: Host Pool) pic.twitter.com/dVgj48rpOP

Following the video’s release, Trump called Trudeau “two-faced” to media while sitting with German Chancellor Angela Merkel, but also added that the prime minister is a “nice guy.”

“And honestly with Trudeau, he’s a nice guy. I find him to be a very nice guy,” Trump said.

Trump said he called out Trudeau on Canada’s lack of contributions to NATO.

“The truth is I called him out on the fact that he’s not paying 2% [NATO funding] and I guess he’s not very happy about it,” Trump said, adding that “he should be paying 2%” and that Canada “has money.”

Trump continued, “I can imagine he’s not that happy, but that’s the way it is.”

“Well, he’s two-faced. And honestly with Trudeau, he’s a nice guy. I find him to be a very nice guy, but the truth is I called him out on the fact he’s not paying 2%,” said @POTUS after @JustinTrudeau’s candid comments caught on camera. https://t.co/8E8xgJGqVR #cdnpoli pic.twitter.com/xtftsBTa6k

Trudeau is still in London on Wednesday, and his schedule shows a press conference later in the afternoon prior to his return to Ottawa.