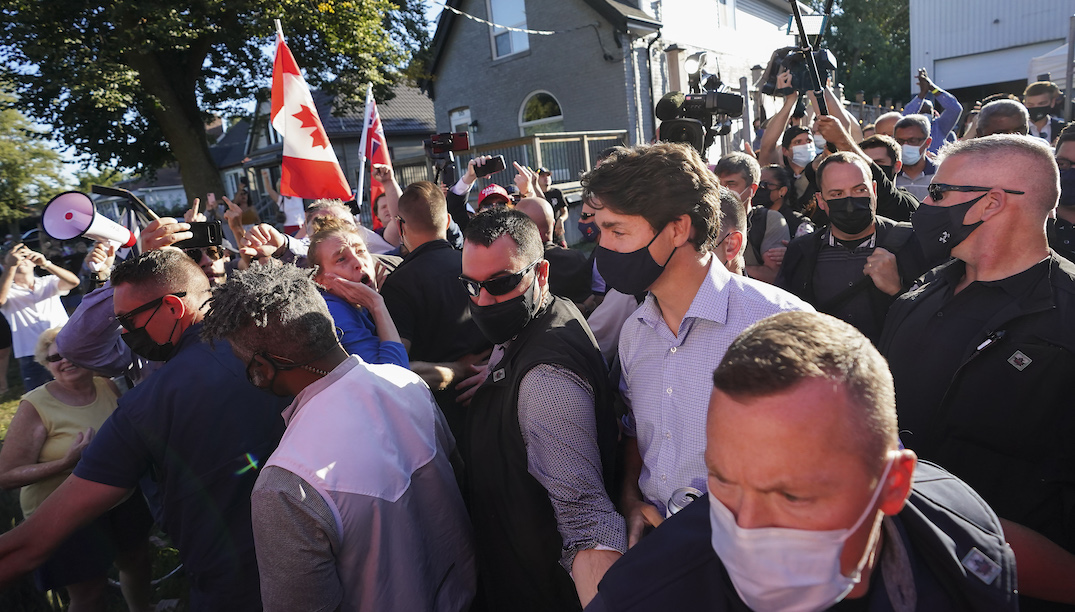 RCMP security detail put their hands up to protect Liberal Leader Justin Trudeau from rocks as protesters shout and through gravel while leaving a campaign stop at a local micro brewery during the Canadian federal election campaign in London Ont., on Monday. THE CANADIAN PRESS/Nathan Denette

Justin Trudeau said his pandemic recovery policies won’t be shaped by the demands of what he called “anti-vaxxer mobs” that have dogged his campaign events in recent weeks, including some who threw debris at the Liberal leader on Monday.

Trudeau made the comments at a steel plant in Welland, Ontario, on Labour Day Monday, where he pledged to extend pandemic supports for workers and businesses if his government is re-elected on September 20.

A noisy crowd of a few dozen people gathered outside the gate to the facility as Trudeau spoke inside, expressing anger over COVID-19 vaccines and pandemic measures. A similar group attended a whistle stop event in Newmarket, Ontario, the night before, shouting slurs at Liberal volunteers, supporters and the leader himself as he shook hands and greeted people.

Trudeau said Monday that he “can’t back down” when faced with the aggressive group as he campaigns for a shot to keep leading the country through the worsening fourth wave of the COVID-19 pandemic.

“Yes, there is a small fringe element in this country that is angry, that doesn’t believe in science, that is lashing out with racist, misogynistic attacks,” Trudeau said.

“But Canadians, the vast majority of Canadians, are not represented by them, and I know will not allow those voices, those special interest groups, those protesters — I don’t even want to call them protesters, those anti-vaxxer mobs — to dictate how this country gets through this pandemic.”

He said the country needs leadership to recover from the pandemic, and painted his main rival in the election as ill-suited to do so because of his less stringent stance on mandatory vaccination for workers. He linked Tory Leader Erin O’Toole’s positions to the “fringe” anti-vaccine crowd.

“They don’t get to dictate policy of this government, so it is puzzling to people to see that on vaccines and on so many other things, Erin O’Toole is at least taking some of his cues from them,” Trudeau said.

O’Toole has said he supports COVID-19 vaccination as safe and effective and pledged to try and get the national immunization rate above 90%, but aims to offer rapid testing as an alternative to people who don’t get vaccinated.

On Monday, he declined again to say how many of his party’s candidates are vaccinated against COVID-19 and accused Trudeau of dividing the country over vaccination choices when many are still hesitant about them.

“I really think this isn’t a time to create an us-versus-them approach,” O’Toole said. “Mr. Trudeau tried to do that right out of the gate.”

People angry at Trudeau congregated in progressively larger numbers at all of the leader’s campaign stops in southern Ontario on Monday.

After a late afternoon event in London, Ontario, some people in the noisy throng threw dime-sized rocks at Trudeau as he walked out of the microbrewery to his campaign bus.

Trudeau later downplayed the incident, though he acknowledged to reporters that some of the projectiles might have struck him on the shoulder.

A large number of people in the crowd in London were dressed in People’s Party of Canada gear. One woman was handing out merchandise for the party and Chelsea Hillier, a local candidate, was on site with her supporters.

She said the crowd has been building “networks” over the last 18 months that have enabled like-minded people to mobilize at Trudeau’s events.

“There is literally nowhere that he can go that we won’t know about it,” Hillier said.

One policy pledge Trudeau’s campaign highlighted on Monday was a promise to legally protect businesses and organizations asking for proof of COVID-19 vaccination from staff and customers.

Trudeau said the federal Justice Department is looking at a “number of ways” to support legislation to ensure legal protections for businesses that “do the right thing” with mandatory vaccination policies. The Liberals have also promised $1 billion for provinces to introduce their own vaccine certificate programs limiting access to some spaces based on immunization status.

Physician groups and other stakeholders have called for a more unified national policy on the vaccine certificates, however, as some provinces resist introducing them.

Trudeau said the federal government cannot unilaterally impose such a system, but said re-elected Liberals would “work together” with the provinces using the funding offer to help them get one running.

The Liberal leader has faced criticism for plunging the country into an election with the pandemic still ongoing and a fourth wave of infections ramping up.

Trudeau addressed that on Monday, saying the “stark choices” over approaches to pandemic recovery highlight the necessity of the vote.

“For people who still wonder whether or not we really needed an election right now, just take a look at the issues and the intensity of debate over so many big issues that really matter to Canadians,” he said.