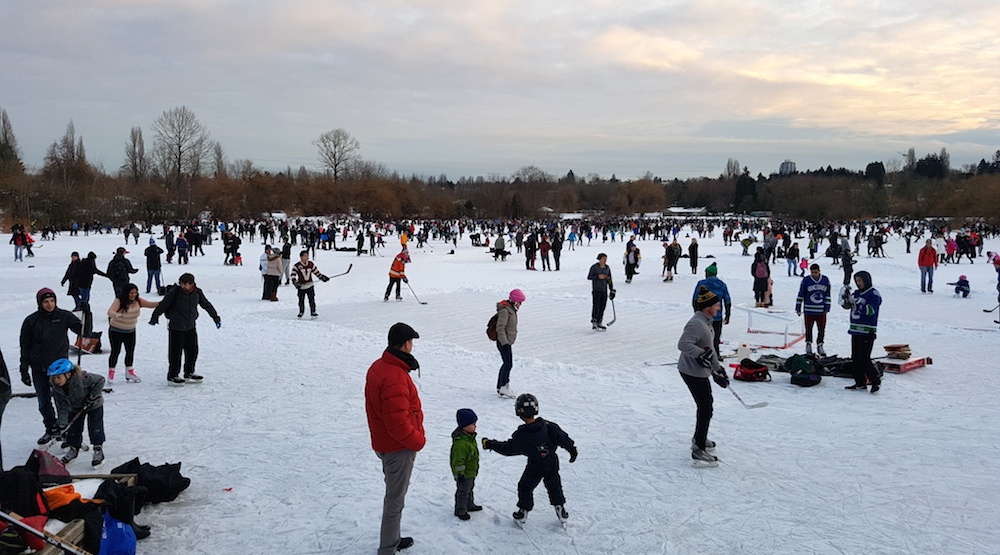 With consecutive days of rainfall and temperatures reaching the teens next week, it is likely that Trout Lake’s frozen surface for ice skating is in its final days.

The Vancouver Park Board’s last measure yesterday of Trout Lake’s ice indicated it had a solid thickness of eight inches, well above the required five inches. But that will quickly change when temperatures soar over the coming days.

Temperatures will begin to warm up on Sunday, reaching up to 4°C and remaining above the freezing point overnight. This warming trend will accelerate with a daytime high of 5°C and overnight low of 5°C overnight on Monday, and it will gradually rise to 10°C by the middle of next week.

With this forecast, Trout Lake’s frozen skating surface could be closed for the season. The last time the lake surface developed a thick enough ice surface suitable for skating was 20 years ago, and it might be many more years before it happens again. With climate change, this phenomenon in the city could soon be a thing of the past.

#tbt to when it was cold(er) and (more) frozen in #yvr this year! Had to make use of the rare occasion to go for a rip. #troutlake #canadiana #hockeyfordays

Trout Lake first opened on Thursday, January 5 and was temporarily closed on Sunday, January 8 due to warmer temperatures and heavy use, to the extent that some areas had surface slush. Thousands of people were seen on the ice the previous day.

It reopened on Wednesday after two days of sub-zero temperatures reaching -7°C overnight.

So far, the ice surface has been open for skating for a total of six days this season. It is the only ice surface in the city that is safe for skating; Lost Lagoon in Stanley Park and the ponds at Vanier Park remain unsafe because of thin ice.

Como Lake, a similarly-sized lake in a residential neighbourhood in Coquitlam, has been open for free ice skating since last Friday.