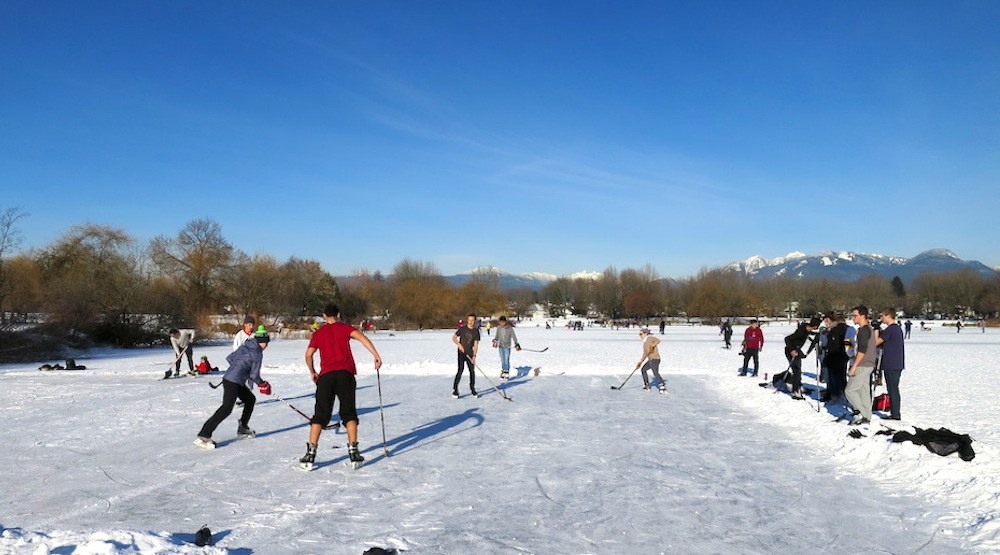 By approximately 11 am this morning, just hours after the Vancouver Park Board announced that Trout Lake is now safe for ice skating, there were already close to 70 people playing on the ice.

This is the first time in 20 years that this giant lake in East Vancouver has frozen over with a thick enough layer of ice for people to skate on. According to newly-elected Vancouver Park Board Chair Michael Wiebe during an on-ice press conference this morning, Trout Lake’s ice thickness had reached between six and 7.5 inches – above the minimum of five inches.

“I’ve been pushing since the day one we got a snowfall because I’ve really wanted to come out here for a skate,” he said. “They have been testing every single day, and I’ve kept asking ‘are we close, are we close’. I want us to have the same experience as I had as a kid here. For me, this is a huge moment and I want people to get these memories and come out here and really enjoy it.”

“There’s a lot of Vancouverites who will have their first jump on here [for pond skating]. It’s very different, so I want all Vancouverites to experience what the rest of Canada gets to enjoy all winter long.”

Free outdoor ice skating on the lake for 4 days

The municipal government is aiming to keep the lake open for ice skating as long as the conditions remain safe and optimal. Skating during anytime of the day is unsupervised, but lifeguards that usually work in the summer will be patrolling the area and drilling ice core samples everyday to ensure the ice is thick and strong enough at all times.

Temperatures have regularly been at the freezing point or under for much of the past month, and this week’s bout of subzero temperatures reaching an overnight low of -7°C has helped accelerate the freezing process.

Environment Canada’s latest forecast calls for snow and slightly warmer temperatures, increasing to just below or above the freezing point beginning today and through the weekend. 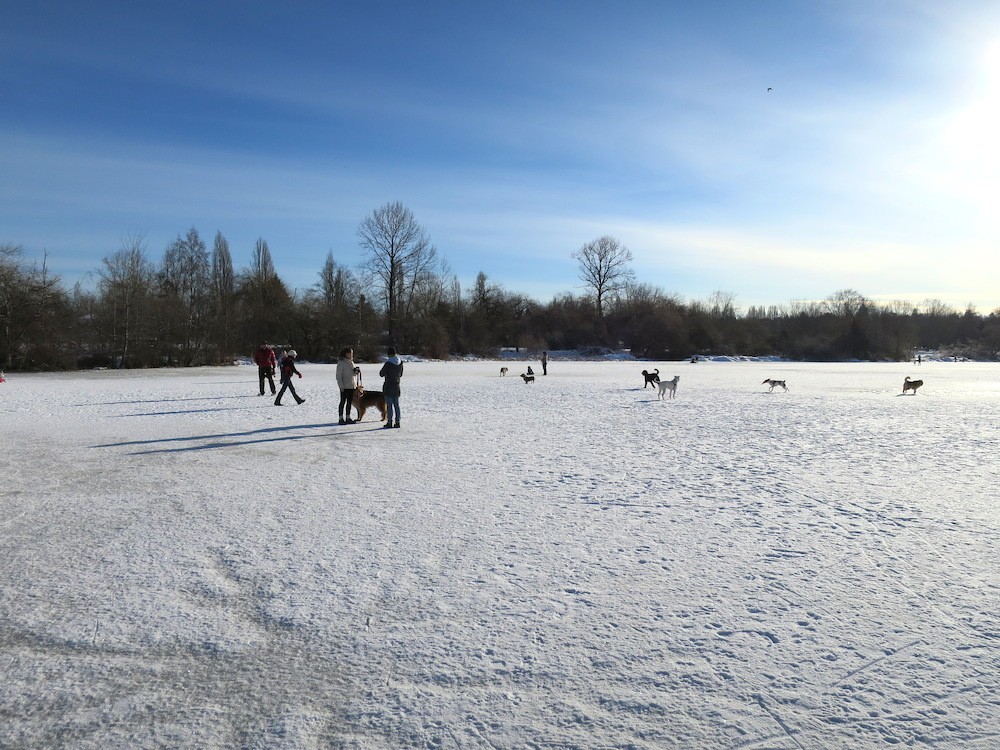 “We have a couple days that will be a bit warmer than zero degrees, but our team will be testing everyday and drilling,” said Wiebe. “We’re excited to hopefully keep this going all weekend.”

“For the Park Board, this is a really exciting moment because for us we want recreation on our outdoor natural spaces. There is no cost here, so this is an access for all, ability to get outside. If you look out today and at our surrounding, there’s a lot of people in Vancouver who don’t come to Trout Lake and see what a special place we have as a gem in our city. We really want people to come out and utilize it.”

Lakeside washroom facilities are open, and so is Trout Lake Community Centre on the southwest corner of the park.

Only Trout Lake is currently safe for skating

There have been social media photos of people skating on other pond ice surfaces, particularly the ponds at Vanier Park in Kitsilano. But Wiebe warns that these surfaces are not safe.

Other ponds and lakes in the city have an ice thickness of just four inches. In some cases, there is only ice on one side of the pond and standing water and ducks sitting on the other side. 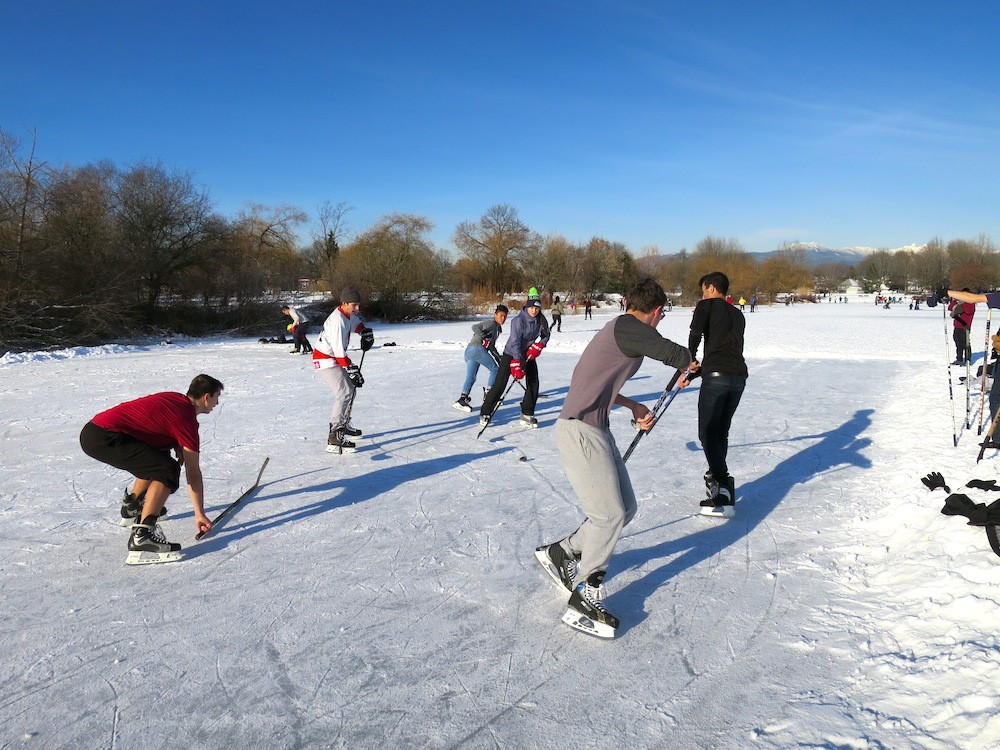 “It’s an amazing day to come out and check out our lake here. Trout Lake is the only one open currently, it’s the only one with the right thickness,” he said.

“None of our other ponds have the same thickness, we have no other ponds open at the moment. We want to make sure people stay off the other ponds and come here and enjoy what we have here.”

Trout Lake is an ideal skating lake as it does not have a water flow and is far away from the warming influence of ocean water.

No zamboni nor rentals; bring your own skates and snow shovel

Crews with the Park Board were seen shovelling snow this morning to make three different ice rink areas for hockey to be played. Some eager skaters also brought their own snow shovels to enhance their own skating experience.

“One of the great things about coming out on a day like today and to make rinks is people are going to do it by hand,” said Wiebe. “So everyone, come out and bring your shovels.”

At some areas of the Trout Lake ice surface, there are large patches of snow, between 2 cm and 4 cm that can make skating difficult, and this will increase by tomorrow with up to 9 cm of snow expected to fall in the city beginning tonight through Friday.

Skaters are advised to bring their own pair of skates as there are no lakeside skate rentals, and the skates available at the nearby community centre cannot be brought outside for use on the lake surface.

Don’t expect the smooth ice surfaces you’re used to at indoor rinks, that’s not what pond hockey is about, which is something Vancouverites might not be used. Expect a bumpy skate on the ice given that it is an uneven surface with footprint indentations from people who went on the ice too early over the past few weeks.

Park Board Director of Recreation Donnie Rosa added: “It’s pond hockey, it’s good old fashion pond hockey. This is fantastic, yes it’s a lot more rough than our indoor rinks but that’s the beauty of it. Everyone is a bad skater out here.” 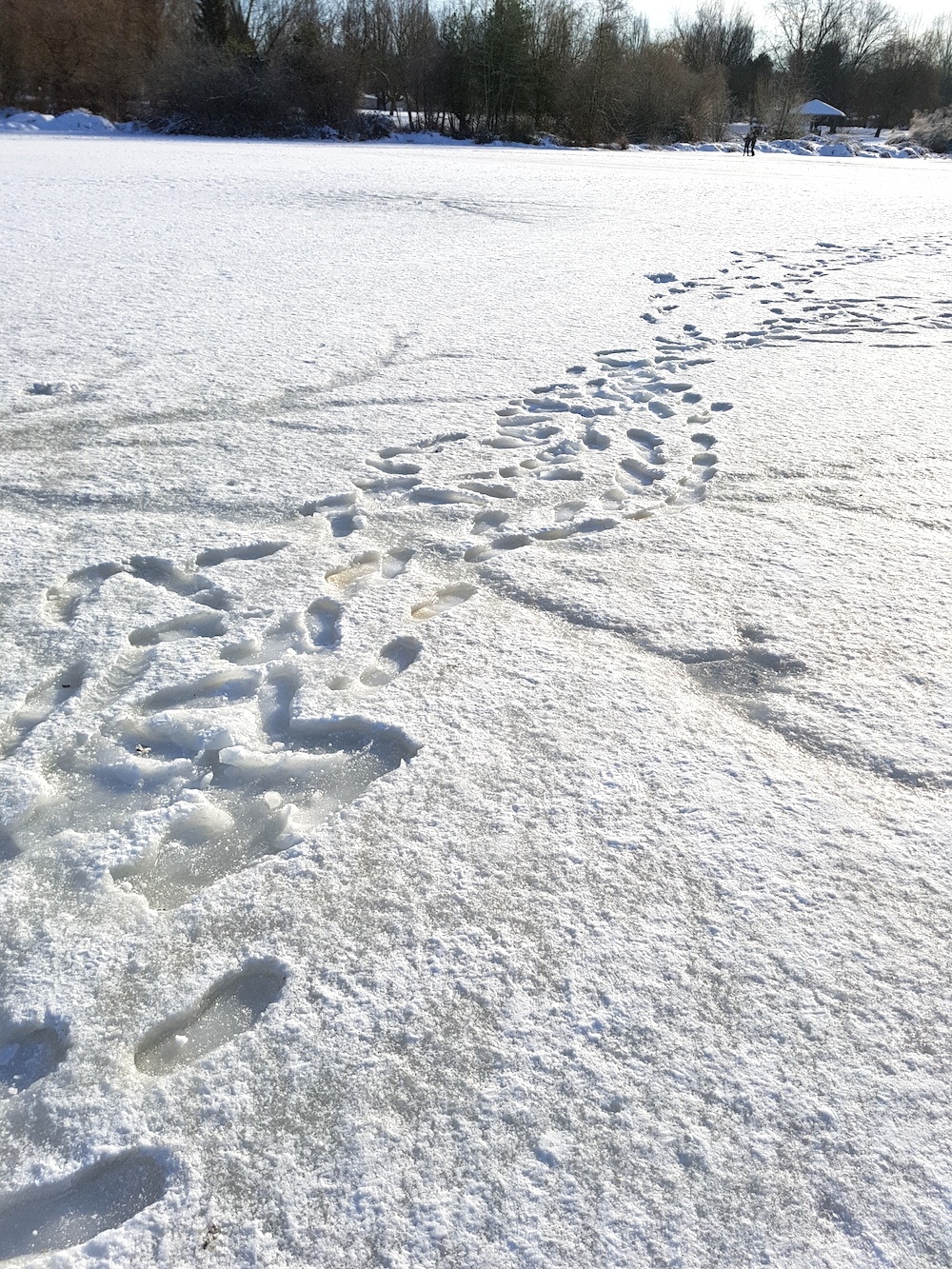 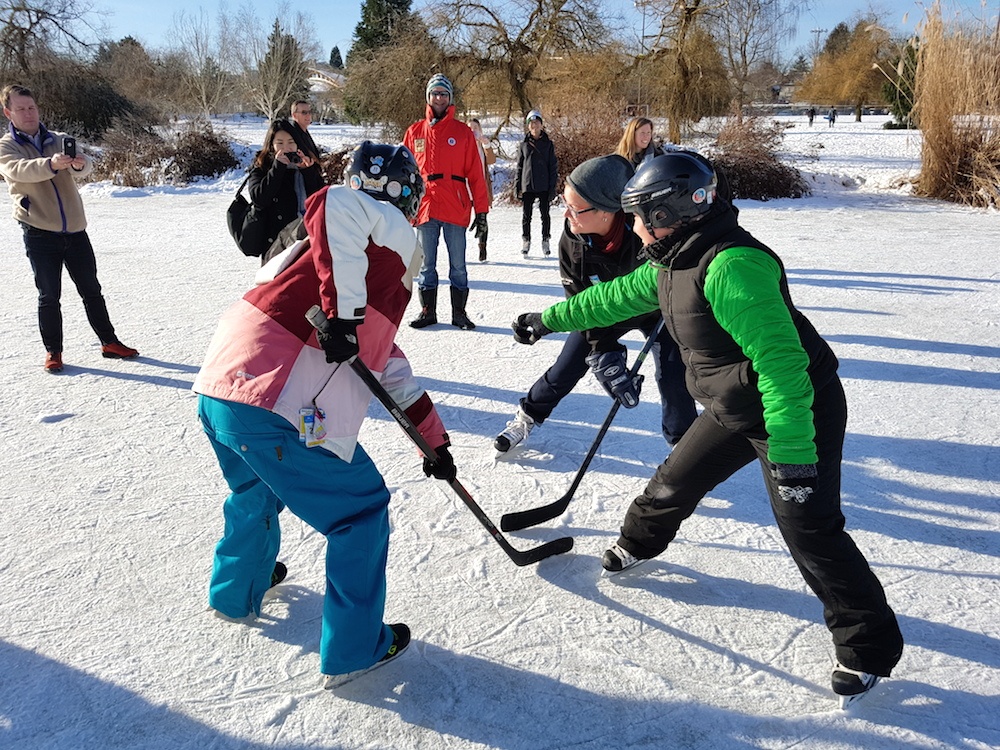 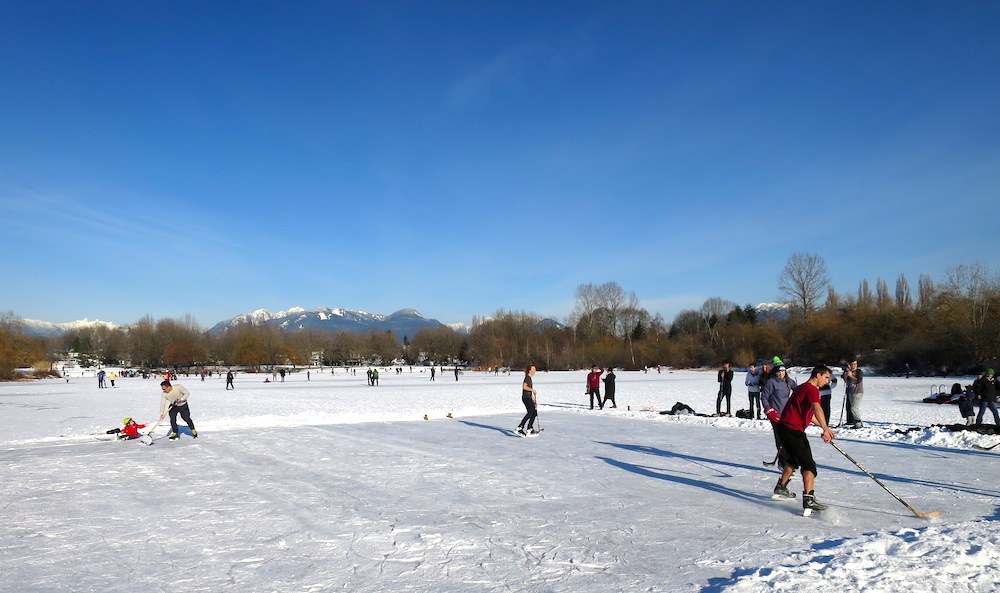 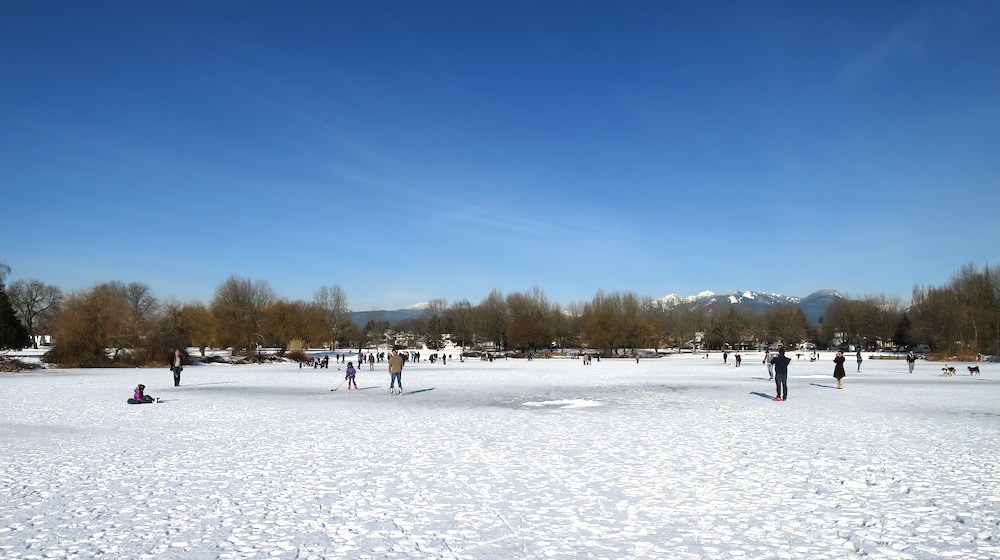 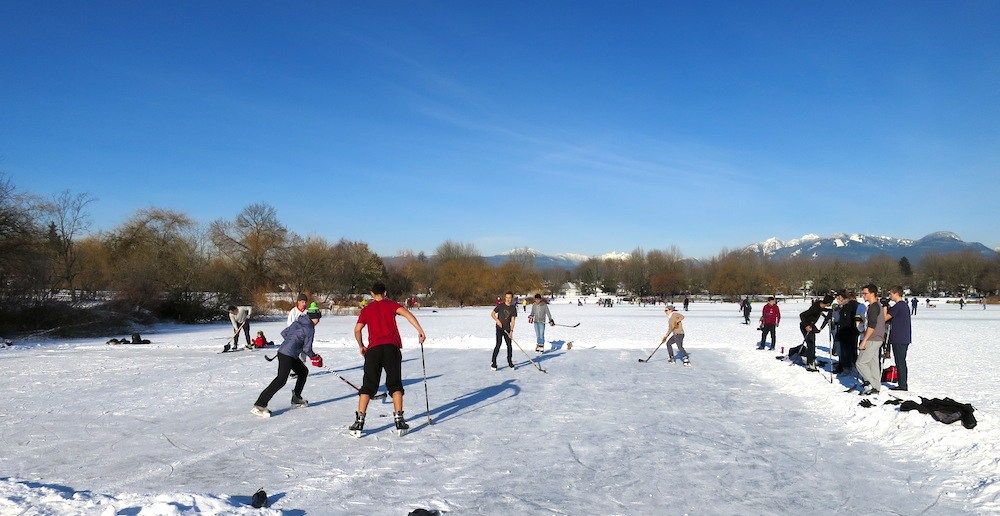 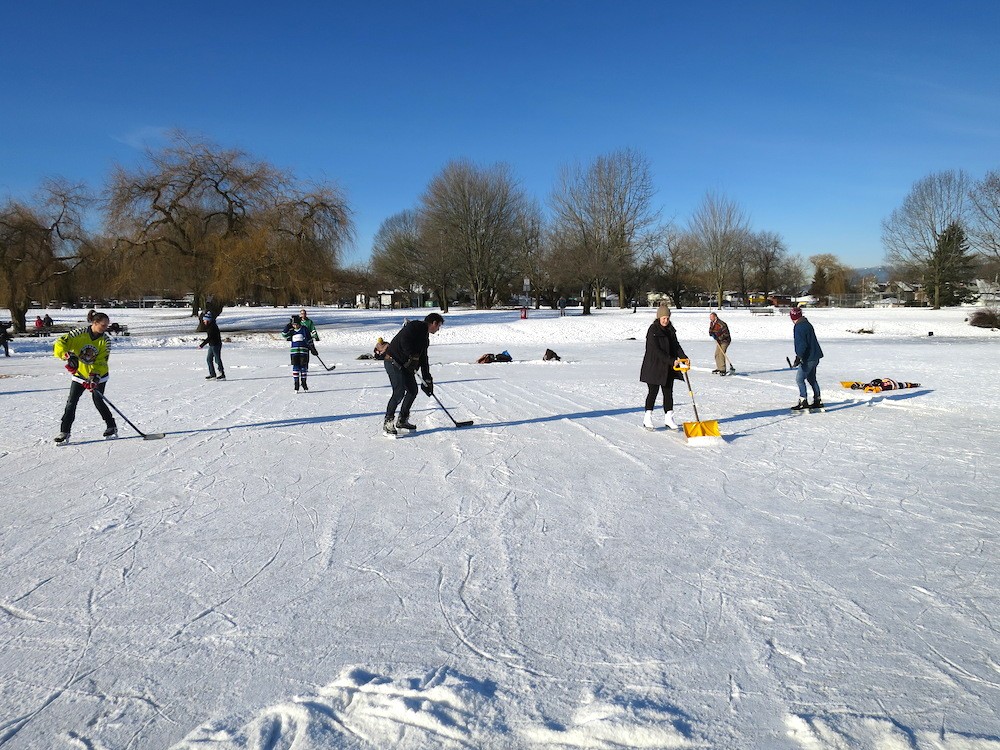