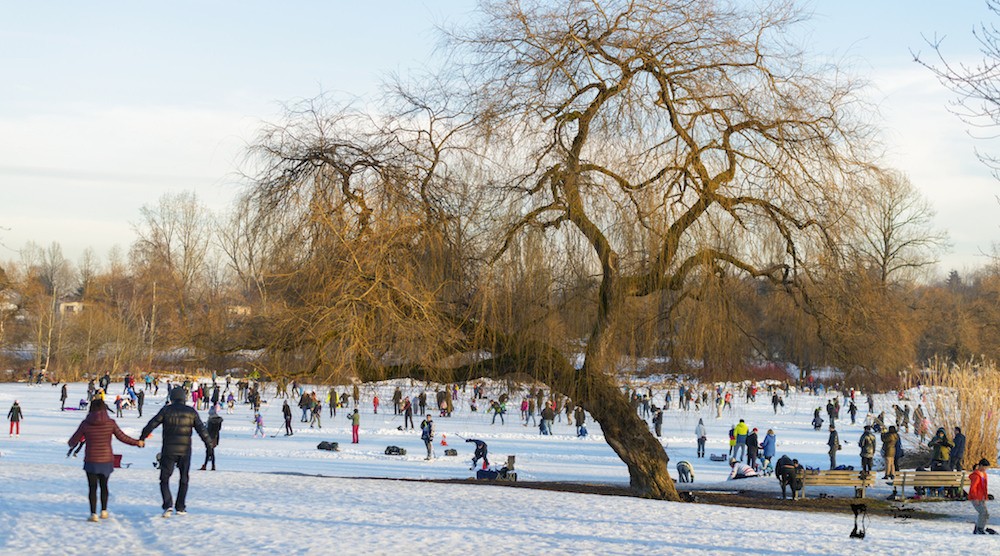 It was great while it lasted. But, as expected, Trout Lake in East Vancouver has closed to ice skating.

The news coincides with the forecast of warm temperatures and heavy rainfall expected to come later this week.

The Vancouver Park Board says the ice surface at the lake is closed as of noon today due to deteriorating ice conditions, to the extent that slush is beginning to form. The thickness of the ice is still about eight inches, but this is a decrease from the weekend.

More importantly, rainfall that is expected to arrive later today will significantly impact conditions and ice thickness. With the forecast calling for rainfall and temperatures reaching the low teens for the foreseeable future, the Park Board adds that Trout Lake is not expected to become safe again for skating this season.

“This has been an incredible opportunity for Vancouverites to skate in the great outdoors, in fact the first time in 20 years,” said Vancouver Park Board Chair Michael Wiebe in a statement. “However, the Park Board is concerned about deteriorating ice conditions and, in order to ensure everyone’s safety, is closing the lake to skaters.”

Barriers and ‘Danger’ signage will be erected around the lake, and ice guards and park rangers will be on site to enforce the closure.

Trout Lake’s ice skating surface opened on January 5 and was open for a total of 10 days, with only a short two-day closure from January 9 to 10 when temperatures warmed up briefly.

Other ponds in the city including Lost Lagoon in Stanley Park and the ponds in Vanier Park remain unsafe for skating because of the thin ice.

However, Coquitlam’s Como Lake, which is similar in size to Trout Lake, remains open for skating until further notice.

Urban lakes in Metro Vancouver regularly froze over up until the 1980s, and the last time the lakes developed a thick enough ice surface for skating was in 1996. With the effects of climate change, it might be many more years before it happens again, if it does happen again.

In a release, the Park Board is also reminding the public that the Stanley Park seawall between Siwash Rock and the Lions Gate Bridge remains closed due to falling ice from the cliffs that overlook the seawall.