It sounds pretentious, I know, to say that you’re going Elizabethan on your first night in England. As if the pausing at the local pub for fish and chips and a few pints was somehow beneath you. In this, I blame Vancouver’s very own Christopher Gaze. Not for the Shakespeare seeming snooty, of course. No, I fault him for me heading straight to the theatre as soon as I arrived in London.

Let me back up. Years ago I fell into the pattern of seeing Bard on the Beach every summer. It’s not that I could follow along especially well. On good nights, I’d guess I grasped about a third of everything said on stage. Yet even then, there would always be a few lines that were so captivating, so fiendishly clever, that I’d swear not only to commit them to memory, but to rush home and study the play. (Neither ever happened, needless to say). 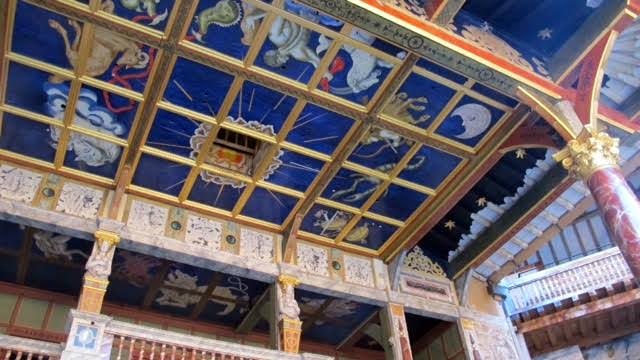 I left Vancouver more a decade ago, but I remember clearly Gaze was unlike anyone else in the cast. Maybe it’s because he was the founder and artistic director, or because he’s British, or classically trained. When he spoke his lines, the meaning was immediately clear. I understood everything, until the next actor was up and my struggle resumed.

What I’ve wanted ever since is to experience a stage full of Gazes, born for a good sonnet and raised in tights and a tunic. And so, as soon as I learned I had meetings in London, I went to the Globe Theatre website.

The stage where it all began… 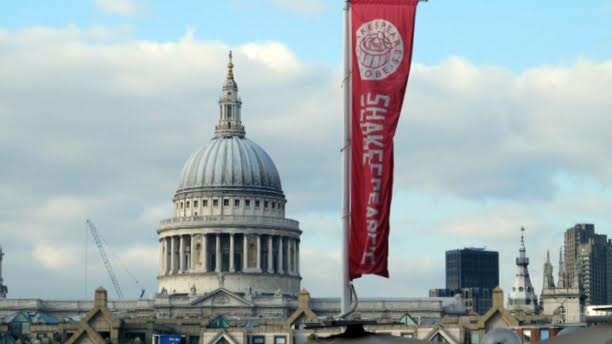 The first thing that strikes you when you enter the Globe, this painstakingly detailed reconstruction of Shakespeare’s first playhouse on the banks of the Thames, is that you can bring in food and drinks. Or maybe that’s just the first thing that hit me, having got lost trying to find the theatre, arriving late and then trying to smuggle a drink inside my coat.

The second thing I discovered – though this one took longer – is that the ‘pit’ section surrounding the stage, is a standing room-only party, where at £5 ($10.15) the tickets are a fraction of the £40 ($81) price I paid to sit in the assigned seats upstairs.

I uncovered this only after speaking with the ushers during the intermission, having spent the first half of the performance baffled by so many in the audience below who seemed to amble in and out, or disappear altogether, during the show. But of course, it all makes sense. Five pounds barely buys you coffee in London; it doesn’t translate into three hours of commitment, not when it involves perching the entire time on your toes to see the stage.

The third thing is that the ushers are adamant that no one takes photos during performance, even though everyone in the crowd has a camera and is equally determined to not leave without letting Facebook and Instagram know they were there.

The reason for the rule, I know, is copyright infringement. But the result is that essentially every picture posted online is hastily taken, abysmally blurry and includes the hand or head of the person standing in front of them. The exceptions, of course, are the photos posted by the theatre itself, which are pristine.

“We have strict statutes and most biting laws”

Indeed, maybe the structures were only too appropriate, given that I was seeing Measure for Measure, a play focused almost entirely on the subject of justice. I won’t exhaust you with the details; just know that treachery, power, love and hypocrisy loom large… with lots of mistaken identity on the side. It is Shakespeare, after all. And though the play was written in 1603 or 1604 (no one is quite sure) the central themes, and accompanying betrayals, are as piercingly relevant now as they would have been 400 years ago.

So bewitched was I by the performance that I returned two days later. I would have gone to Measure again the next night but I had work commitment, so my only option was Nell Gwynn, a brand-new play starring Gugu Mbatha-Raw. This time I paid the £5 and stood in the pit with the rest of the ‘groundlings’, which was a blast, except for my legs wanting to fall off after three hours.

Mbatha-Raw, a fast-rising Hollywood star, was spellbinding and every word on the stage was wonderfully clear.

In contrast, I probably still only caught about 60% of Measure – yet the magical wordplay and cunning wit was missing.

Same theatre, same period, essentially, and the same superb company, but even with stretches of the dialogue lost to me, the genius of Shakespeare’s work stood out. It’s that brilliance that I now understand draws people back, year after year, play after play whether it’s under a tent by the beach or the site of his first performance.