The results of a TransLink study reveal that performance wise, a UBC-Broadway subway is the best option for the Broadway Corridor’s present and future transit needs. The underground extension of the existing SkyTrain Millennium Line from VCC-Clark Station to UBC along Broadway will attract 320,000 daily boardings by 2041. TransLink’s findings through its UBC Line Rapid Transit Alternatives Analysis comes a week after the City of Vancouver and UBC released a KPMG report that supports the implementation of a subway.

The transportation authority has not recommended bus solutions such as additional B-Line service or bus rapid transit given that these options will not meet the long-term capacity needs of the Broadway Corridor.

Based on the study’s initial findings, we can state that a full underground SkyTrain extension to UBC is the clear winner given that it provides the best investment return relative to the various light-rail transit (LRT) options, including one option that will bring LRT underground for a short length under Central Broadway (where it is busiest) as well as another combination option that would build both LRT and SkyTrain.

While LRT is the cheapest option, it offers just a small fraction of the new ridership a full underground SkyTrain line would bring to the corridor. The combination option (underground SkyTrain to Arbutus via Broadway, in addition to LRT from Main Street-Science World Station to UBC via the Arbutus railway corridor and then Broadway) is TransLink’s second preferred/best option and also the second most expensive.

On the other hand, for just $334-million more, the full underground SkyTrain to UBC option will attract nearly 20-percent more riders and shave 10-minutes in travel time from the combination option. See the info-graphics below on the three options being considered.

Clearly, the only real solution to the Broadway Corridor’s transit needs is an underground SkyTrain line to UBC. Click here to read Vancity Buzz’s Special Feature on why the UBC-Broadway subway needs to be the regional priority.

At the very earliest, although highly unlikely, a UBC-Broadway subway could open by 2021 should full planning and engineering begin immediately with construction beginning in 2016. Translink has not decided which of the three options to proceed with, however, the information it has provided through its report lead towards a clear answer: underground SkyTrain extension.

KEY ATTRIBUTES OF THE IDENTIFIED ALTERNATIVES 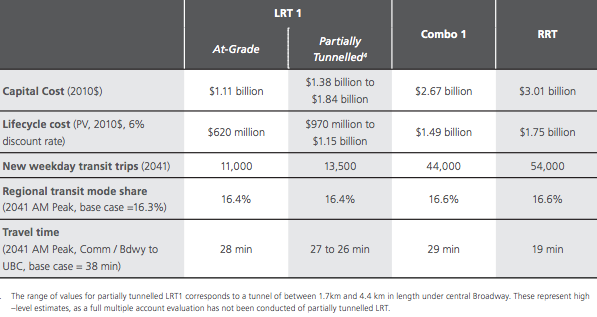 SECOND OPTION – COMBINATION ALTERNATIVE 1: Combination of RRT from VCC-Clark to Arbutus with the portion of the LRT2 route operating from Main Street-Science World to UBC. 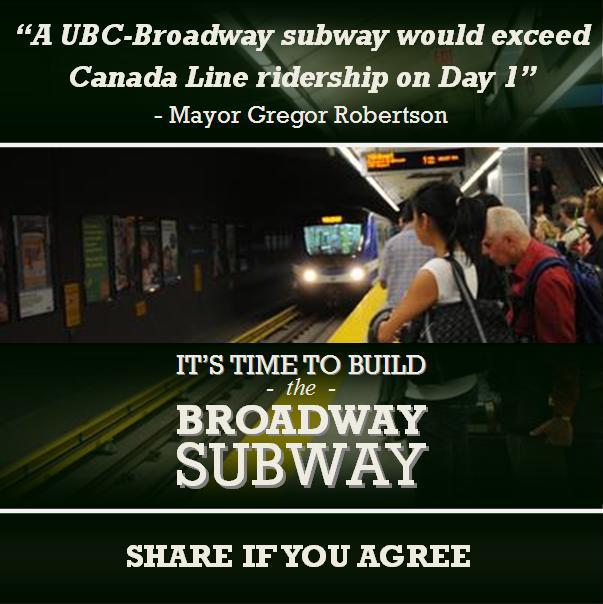