The review says they are providing more rides at a lower cost with the same amount of service hours. Over the last four years, boardings per revenue hour system-wide has increased 11.4% to 60 per hour, buses are now 88% full, and the cost per boarded passenger has dropped 10% to $1.34.

The results show that TransLink is truly doing more with what we have,” said TransLink’s Chief Operating Officer Doug Kelsey in a release. “We delivered more bus trips at lower cost in 2012—while at the same time achieving our highest customer service rating ever.”

Not surprisingly, the top-10 busiest routes in the region all service Vancouver, while the ten worst performing ones were located in the suburbs. The 99 B-Line led the way with an average of 176 boardings per revenue hour while route C12 in the North Shore had the least with only 3 boardings per hour. 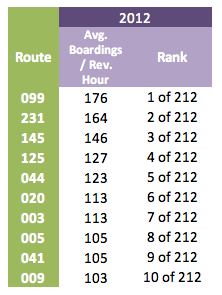 The transportation authority has been struggling to find funds to expand transit service to meet the demands of the growing population in Metro Vancouver. TransLink is facing what it calls “a triple challenge“—an increase in gas price is causing increased operating costs and demand for transit while revenues decline.

They have been looking to government for new and sustainable revenue sources, but none have come down the pipe and is not expected until November 2014 at the earliest. A referendum is slated to be held then and voters will be able to decide on a short-term funding mechanism like a vehicle levy.

In the interim, TransLink has been forced to optimize services to address overcrowding and pass-up issues. Service hours from lower performing routes have been reallocated to higher ones like the 99 B-Line.  The information gathered from the Bus Service Performance Review will help guide these decisions. The next round of service changes are slated to be implemented in September.