Despite the glitches they have had so far in 2015, last year was a good year financially for TransLink.

Metro Vancouver’s transportation authority says executive salaries were cut by more than five per cent and 52,000 hours of bus service were reallocated to busier routes. These changes combined saved more than $100 million on their bottom line in 2014, according to a media release.

McLay took home $354,460 last year, almost $30,000 less than the year before. The cost cutting measures includes the salaries of the executive vice presidents and presidents of the subsidiary bus and rail companies, which had a four to 12 percent decrease in their six figure salaries.

It is important to note that base salaries at TransLink have been frozen since 2013.

TransLink’s 2014 Annual Report indicates 234.6 million passengers used transit service last year. Passengers also gave TransLink a rating of 7.6 out of 10 for customer satisfaction. Service complaints are down three per cent last year according to TransLink Interim CEO Doug Allen, even though ridership took a fall after the fare hikes in January 2013 and SkyTrain disruptions in 2014. 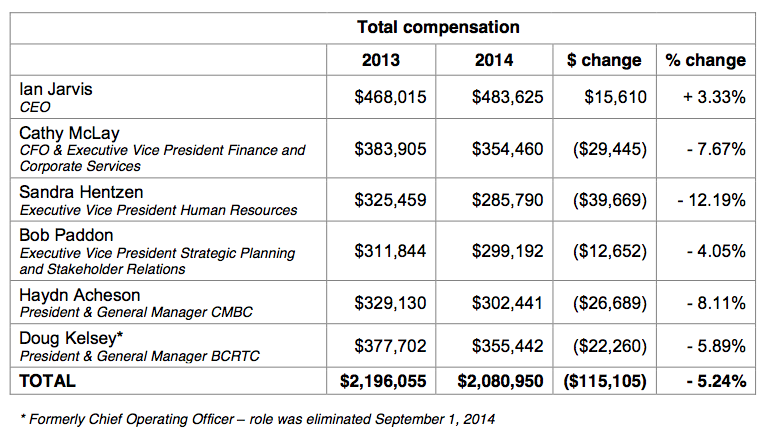