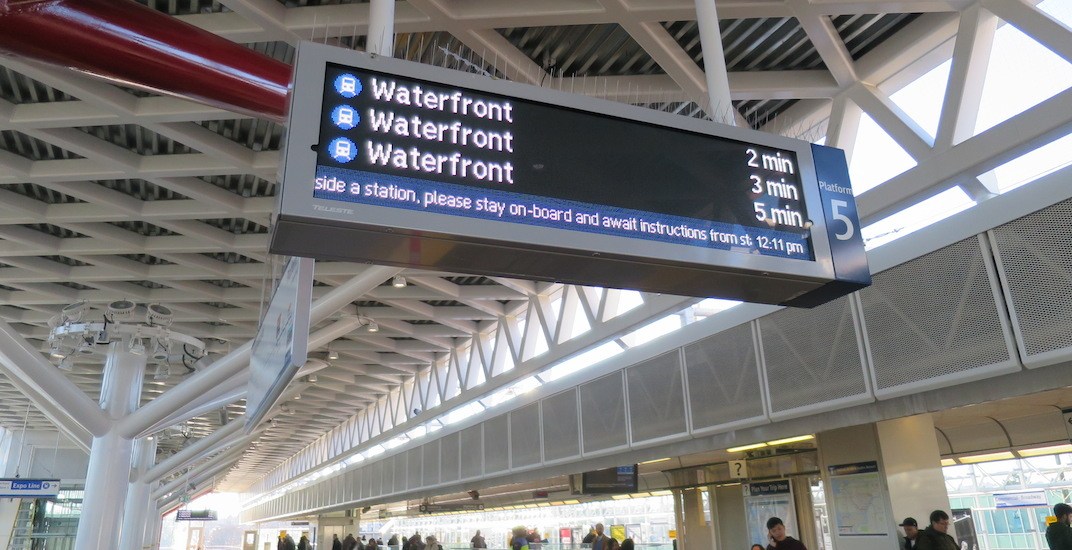 After experiencing a dip in on-time reliability performance earlier in the decade, TransLink is reporting that the Expo Line and Millennium Line systems saw an on-time performance (OTP) of 96.38% in 2018 — the highest performance level on record for SkyTrain.

This is up from the on-time performance of 95.32% in 2017, according to a new report that will be reviewed by TransLink’s board of directors this Friday.

Compared to 2017, service delays of 16 to 30 minutes were down by 34.3% and delays of over 30 minutes fell by 30.4%. This also accounts for the significant weather-related delays in December 2018, such as the flooding at Columbia Station.

The OTP also exceeded the minimum target of 95.4% for almost every month in 2018. OTP is defined as being within three minutes of the train’s scheduled arrival.

Contrast this with the OTPs of a few other train networks elsewhere in the world; San Francisco BART’s OTP was 85% in 2018, Montreal Metro’s OTP was 97% in 2017, Calgary’s C-Train LRT’s OTP was 86% in fall 2017, Washington DC’s Metro’s OTP was 87% in the first two quarters of the current fiscal year, and New York City’s subway’s best OTP was 70.3% in October 2018, which was the best figure for NYC’s subway system in over two years.

The number of complaints received for the Expo and Millennium lines also saw a corresponding decrease in 2018, with 1,711 complaints logged — a drop of 4.7% compared to 2017. The decline was largely due to less customer concerns relating to delays, which saw a 35.5% decrease in this category.

The public transit authority also stated complaints relating to track noise fell by 7.2% compared to 2017. They attributed this to the ongoing track maintenance program.

The OTP of the Canada Line, which is privately operated by ProTrans BC, a subsidiary of SNC-Lavalin, was not provided, but TransLink notes that the number of complaints in 2018 increased year-over-year by 16% to 233 complaints.

Most of these complaints were about stations, trains, and customer relations. During the warmer months of July and August, there was a spike in complaints about the poor quality of air conditioning on the trains.

Additionally, the Canada Line also saw an increase in complaints related to the cleanliness of stations, walkways, and trains.

When it comes to the bus network, 65% of bus riders rated the overall bus system as “good-to-excellent.”

“The top three areas of bus service strength remain: having an operator who drives safely and professionally, feeling safe from crime on board the bus and having a direct route. Four in five riders gave scores of 8 or higher to each of these attributes,” reads the report, adding that overcrowding, frequency of service, and OTP are the three lowest-rated bus service attributes.

SeaBus remains the highest-rated transit service, with 83% rating the service as an 8 out of 10 or higher for overall service.