A delegation of mayors will be meeting with federal cabinet ministers, party leaders, and MPs in Ottawa on Wednesday to discuss TransLink’s record-breaking ridership growth, forecasts for continued rising ridership demand, and specific funding requests that support the Mayors’ Council’s 10-year expansion plan.

“Transit expansion has been a huge success story in Metro Vancouver, and it is clear that our communities want governments to continue investing in order to improve service,” said Jonathan Cote, chair of TransLink’s Mayors’ Council and the mayor of New Westminster, in a statement.

“Our region is united in supporting the 10-Year Vision transit expansion plan because we all know what is at stake. If we want to grow our economy, tackle climate change, connect our regional business hubs and post-secondary institutions, and ensure better access to affordable housing, we need to expand our transit system.”

The Mayors’ Council says it has now made a formal submission to the federal government ahead of the 2020-21 federal budget, with its requests including a new permanent federal transit fund, with legislation introduced in 2021 and funding starting in 2027 when current transit infrastructure funding programs expire. This will provide TransLink with about $375 million annually in stable capital funding for its project.

“Although a Permanent Transit Fund (PTF) in 2027 may seem a long way off, because TransLink secures funding for transit expansion plans 10 years into the future, a properly designed PTF that provides revenue certainty to TransLink now will allow the agency to ‘bank’ on future PTF revenues and commit to future projects now rather than waiting until 2027,” reads the submission.

“A ‘bankable’ PTF requires a federal funding program enshrined and protected in legislation and with signed long-term federal-provincial agreements, similar to how the permanent Gas Tax Fund was set up starting in 2012.”

Another request is interim funding that bridges the years-long gap ahead of the start of the PTF, specifically $685 million by the middle of 2021 for the federal share of Phase Three of the Mayors’ Council’s plan. This supports projects such as the $1.5-billion extension of SkyTrain between Fleetwood and Langley City Centre, the proposed $200-million SFU Burnaby Mountain gondola, new additional and replacement SkyTrain cars, renovations to SkyTrain stations, five new additional RapidBus routes, and improvements to regular bus service. 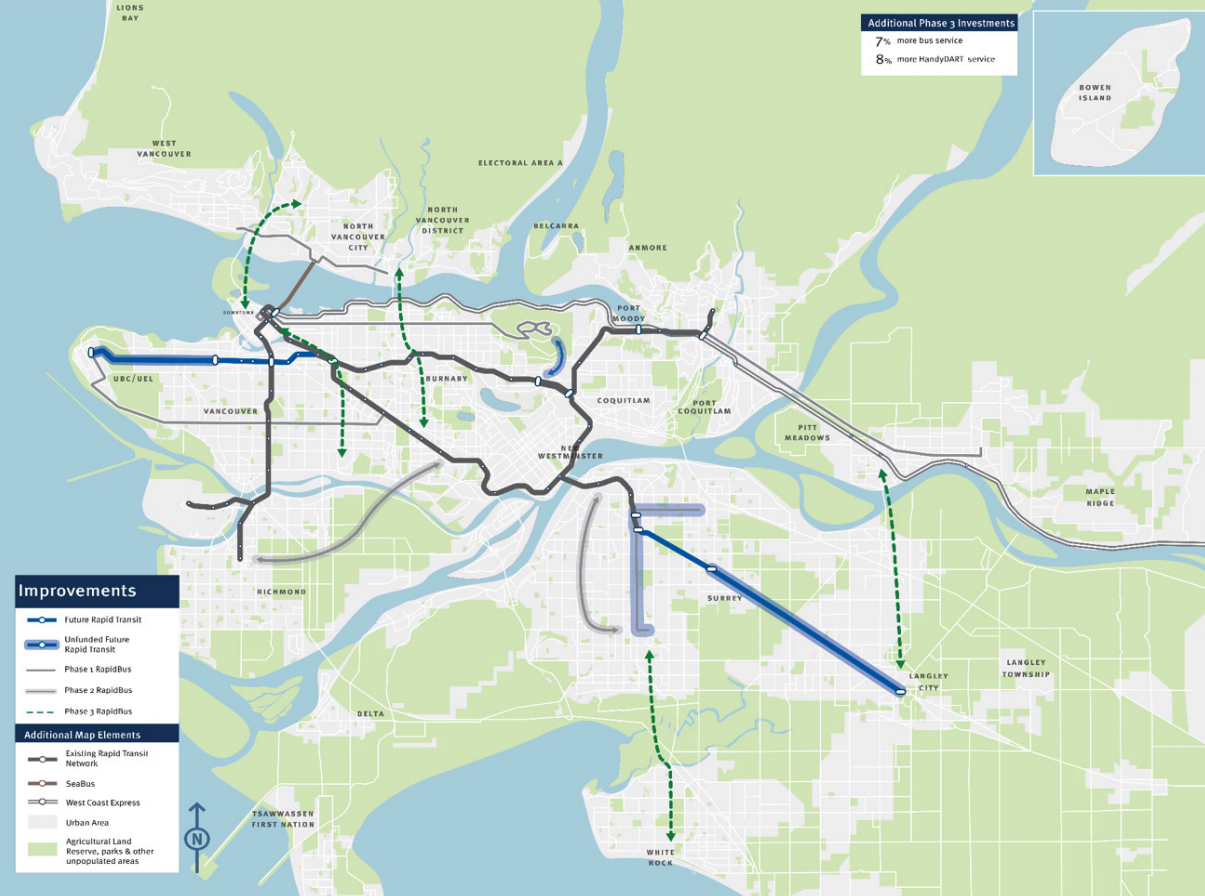 Map showing the progress of the Mayors’ Council’s transit expansion projects. Click on the image for an enlarged version. (TransLink)

Additionally, the Mayors’ Council is seeking $225 million to accelerate the conversion of TransLink’s bus fleet to electric-battery bus models starting in 2021. The public transit authority is looking to acquire 591 zero-emission electric buses by 2029, including new replacement electric-trolley buses.

But if additional funding for the electric-battery bus transition is not expedited, TransLink may be forced to acquire one further generation of internal combustion models, such as hybrid diesel buses, between 2023 and 2030.

However, beyond 2030, all retiring buses will be replaced with electric-battery bus models towards the goal of completing fleet-wide bus electrification by 2050.

To support the bus electrification strategy, by 2040 the public transit authority needs $248 million for charging infrastructure, and $199 million for the purchase of electric-battery buses.