In a leaked email from TransLink interim CEO Doug Allen, the company reveals they will be making three personnel changes in order to minimize spending at the senior executive level.

The major announcement includes the dismissal of British Columbia Rapid Transit Company President and General Manager Doug Kelsey and the appointment of Mike Richard in his place. In the email, Richard is noted for his 30 years working with the SkyTrain, including testing and commissioning the first SkyTrain in 1985.

“Since 2011, staffing costs across the TransLink enterprise have been significantly reduced through downsizing at the management and executive level and the subsequent elimination of positions,” the email reads.

Another big announcement out of the June 14 memo is the departure of Interim CEO Doug Allen on August 10, 2015, with the replacement by Cathy McLay. McLay currently holds the position of Chief Financial Officer and Executive Vice President of Finance and Corporate Services. She will also maintain those positions while acting as CEO.

Allen was is currently on a short term contract that expires on August 10. McLay will take on the temporary placement until the company can find a permanent CEO.

Allen signed off his email with a sympathetic note, saying “I understand that the past several months have not been easy for employees and that changes and uncertainty have been difficult. Your work here matters, and your ongoing commitment to the organization and the people of Metro Vancouver is very much appreciated.”

The restructuring occurs after TransLink lost the plebiscite that would have given them $250 million in taxpayer money to improve transit across the region. A large part of the reason why 62 per cent of people rejected the proposal was a widespread distrust in the company for spending too much on executive salaries.

As of 2013, Executive Vice President of Strategic Planning and Stakeholder Relations position Bill Paddon made a salary of $307,857, President and GM Doug Kelsey made $377,054 and CFO Cathy McLay made $330,753, according to the Canadian Taxpayers Federation.

There has not been an announcement on how much money this will save TransLink or if any of these senior executive staffers will see a change in their salaries.

Read the full email below: 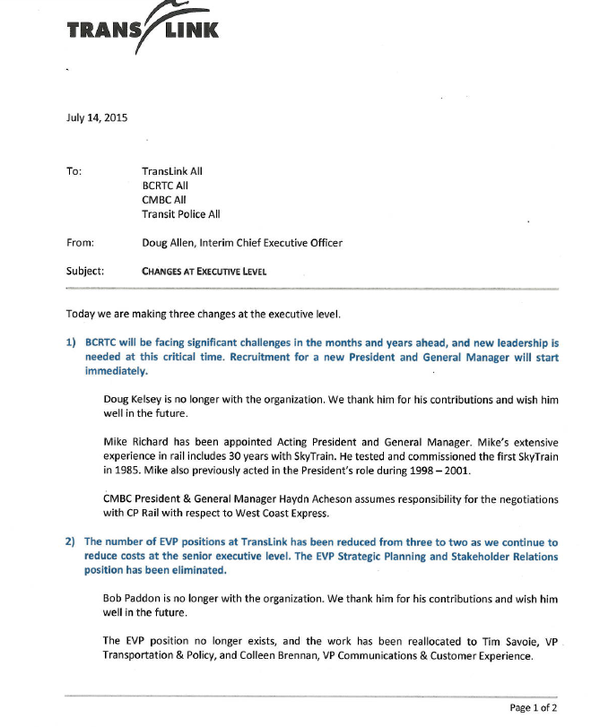 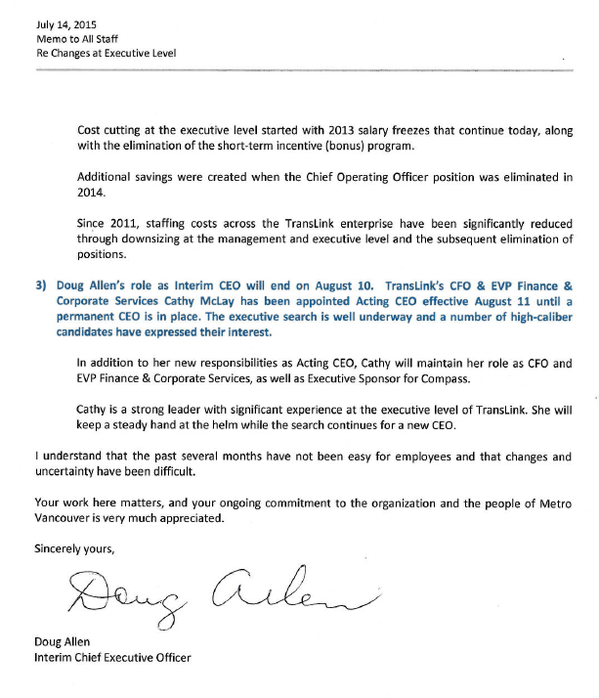