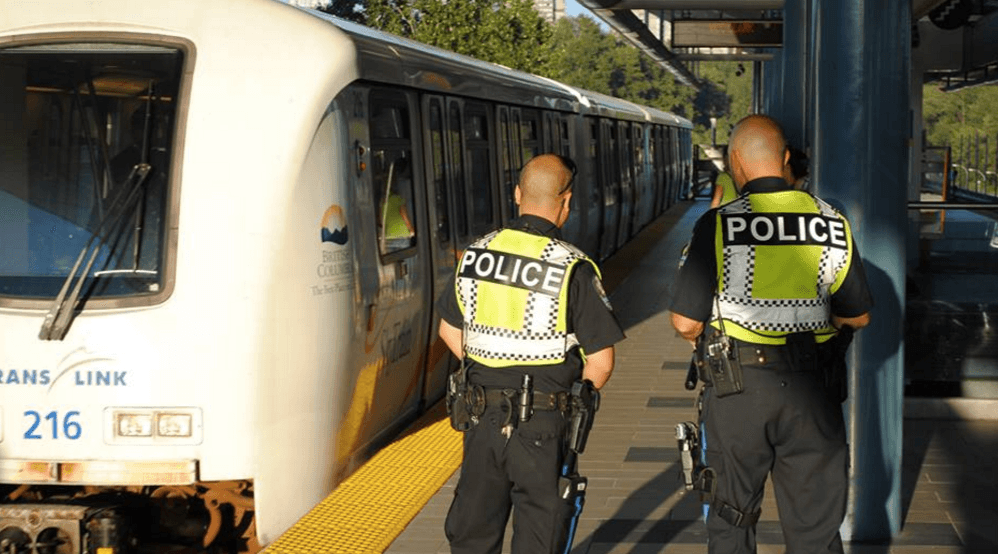 Reported crimes taking place on public transit have increased, but Transit Police say this is not a cause for public concern.

“First of all, I want to say very clearly that we believe we have a safe system,” Anne Drennan, spokesperson for the Transit Police, told Daily Hive.

“We believe that the increase we are seeing right is mostly of a result of increased reporting and we have enabled that in a number of ways,” she said.

According to Drennan, more passengers are reporting through Transit Police’s text-a-crime number. By simply texting to 87-77-77, passengers can privately and quickly report any problematic incidents they may witness on a Skytrain, bus, or Seabus.

“This is a discrete way of letting us know in real time what is going on. It is very awkward sometimes for a person to speak into the phone and let us know what is happening with the suspect right in front of them or beside them,” said Drennan.

She says another way of increasing reporting is through the Hub policing network, which was implemented last year at Broadway-Commercial, Marine-Gateway, Surrey Central, Lougheed, Metrotown, and Waterfront stations.

“Quite often if there is something occurring, someone can report directly to a police officer they see at the station,” Drennan said.

The Hub system also works as a safety network,  allowing officers to attend to an incident at a nearby station if need be. 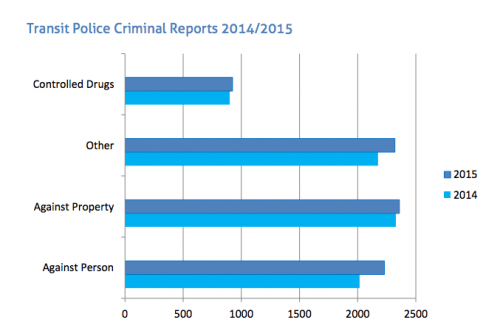 All categories of crimes saw some sort of increase from 2014 to 2015. But it was the “Other Criminal Code”category that saw the greatest rise (6%) .

Mental health is a factor

According to Drennan, this category accounts for a large number of individuals acting out on certain mental health issues.

“Well, we deal with a lot of people suffering from mental health issues,” she said, adding that many of these individuals rely on transit as their only means of transportation.

Drennan says that even if  those with mental health issues are not committing a criminal offence, they can display behaviour (such as yelling, shouting, staring) that may make other passengers uncomfortable.

This is because the passengers themselves, may not be aware that the behaviour is actually the result of a mental health episode or condition.

Drennan also says that transit officers deal with many people who are experiencing suicidal thoughts or those attempting to commit suicides.

“Our officers will approach these people, engage in conversation, find out exactly how the person is feeling and what it is they are dealing with,” she said.

According to Drennan, all transit officers go through extensive and “very good” training in regards to assisting mentally ill passengers but admits there is always more that can be done.

“It’s an ongoing process,” she said. “It’s always being updated (and yes) we can always use more training.”