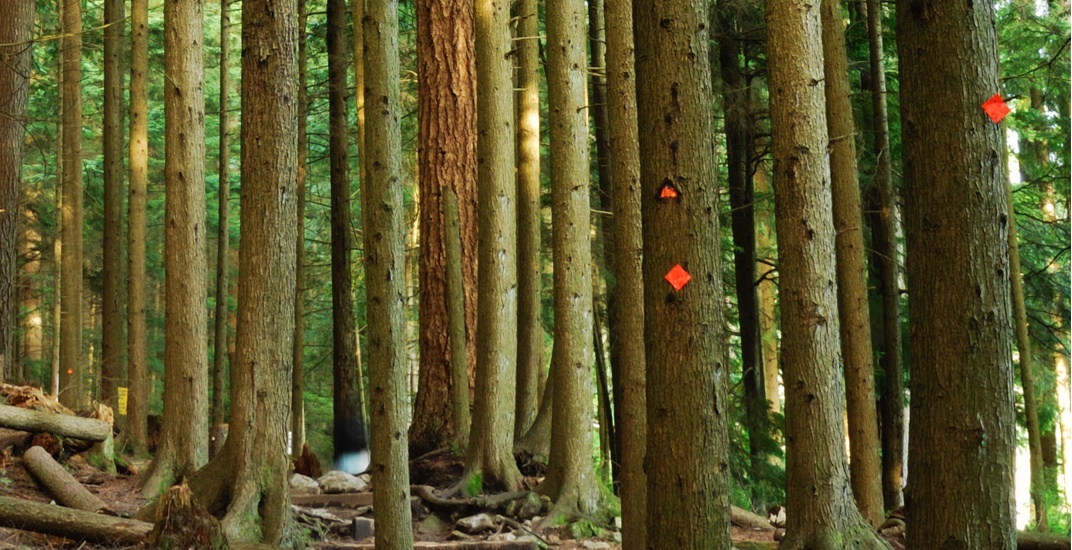 North Shore Rescue has a simple but direct message for the person(s) responsible for removing trail markers from North Shore mountains: Stop.

“Someone has been going in and removing the markers on these trails and we don’t know for sure what their reason is,” said North Shore Rescue’s Doug Pope.

And while trail marker theft has happened before, Pope told Daily Hive the issue has more recently come to a head due to the sheer volume of markers being removed.

This season alone, Pope estimated, “hundreds” of markers have needed to be replaced – particularly in the area around Mackay Creek, which goes up the front side of Grouse Mountain, east of the Grouse Grind.

The removal of trail markers takes its toll on more than just those tasked with replacing them, though.

“These markers are very important,” said Pope. “We get a lot of different varieties of hikers into those trails and some of them are not experienced enough to navigate without markers.”

This leads to a domino effect of the hikers getting lost – often after dark – and then calling North Shore SAR who then have to respond in less-than-ideal conditions.

“We’re sending rescuers into potentially dangerous situations,” Pope said. “And a lot of us have day jobs and we have to go to work the next day as well.”

As such, one of the main ideas behind the setting of trail markers is to “reduce our call volume.”

But even more important than that, markers exist “to keep people safe.”

In the case of McKay Creek, for example, if markers aren’t in place, “the natural topography of the trail tends to suck hikers east and into McKay Creek, which is actually a very steep and dangerous gully in sections,” he continued.

And that is one of the things that makes the removal of the markers so frustrating for Pope and the rest of the rescue team.

“This marking program makes a lot of sense to us, but we’re very discouraged when we spend hours and hours putting them up to have someone take them down,” said Pope.

Markers not easy to remove

It’s not like removing these markers is a particularly straightforward process, either.

In some instances, Pope explained, markers are located high above ground level and are set in place using tools like ladders and spiral nails.

“It’s not an easy task to put them up or take them down,” furthered Pope.

However, despite the ongoing issue, North Shore Rescue doesn’t plan to stop putting markers in place.

“We’re not going to leave this alone because we can’t sustain an increase in call volume that comes from unmarked trails,” Pope said.

For those who are removing the markers, Pope said he and the team “ask them to think of more than themselves and their reasons for wanting to take them down, and to think of others. It’d be really great if whoever is removing them would stop.”

Pope said North Shore SAR has been in discussion with North Vancouver RCMP and asked trail users “to be mindful and keep a lookout for people removing trail markers.”

Anyone who witnesses suspicious activity on the trails is asked to contact North Vancouver RCMP.