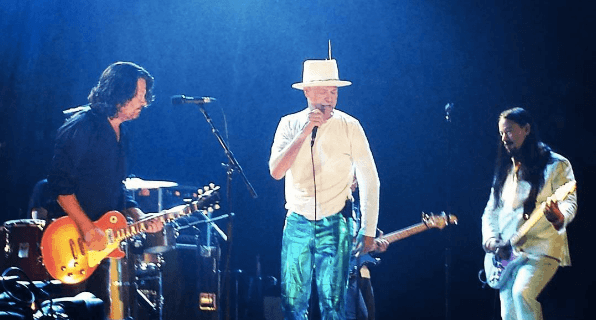 It was a full house on Sunday night as fans of The Tragically Hip packed Rogers Arena to bid farewell to the iconic Canadian band.

The Hip have embarked on their final tour following lead singer Gordon Downie’s terminal brain cancer diagnosis. The band kicked off their Man Machine Poem tour in Victoria and are playing two sold out shows here in Vancouver.

If you weren’t able to make it last night, here are 14 photos of The Tragically Hip rocking out at Rogers Arena (and for those lucky enough to have tickets for Tuesday’s show, think of this as a preview).

Spent an incredible evening with @TheTragicallyHip last night. Only one more day until the #ManMachinePoemTour returns for a second show in #Vancouver! #TheTragicallyHip #Regram

5 guys I adore + an arena of 18,500 people or so on their feet in celebration. Night 2/3 #TheTragicallyHip #TTH #TheHip#ManMachinePoemTour #RogersArena #Vancouvernight1

Goodbye Gordon we love you! The best in the business. Forever the best performance I’ve ever seen! #thetragicallyhip #thehip #thehipvancouver #gordon

As always, nothing short of epic. #thetragicallyhip

The Hip did not disappoint. #thetragicallyhip