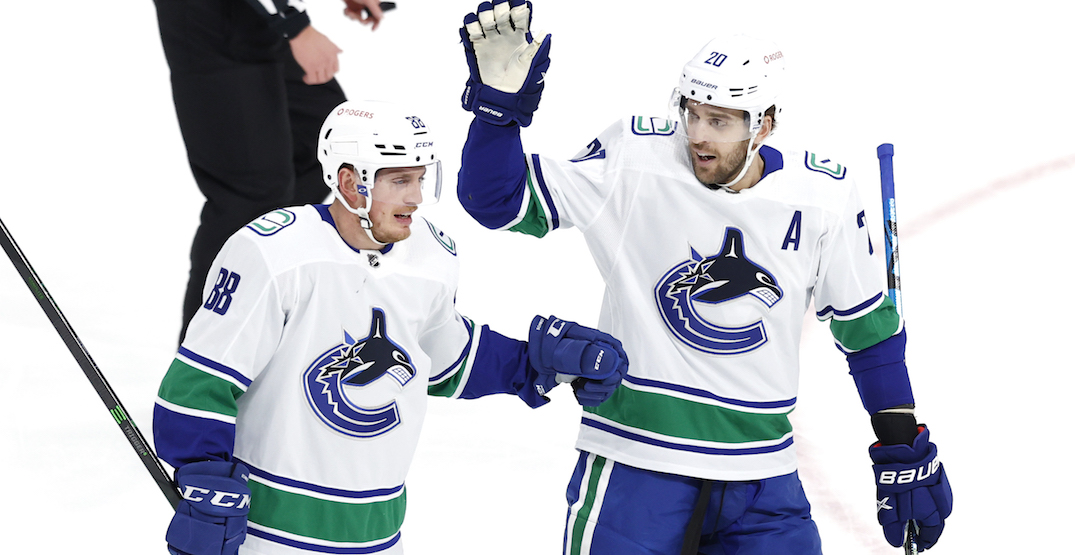 After finishing dead-last in the North Division, it goes without saying that Vancouver Canucks GM Jim Benning has a lot of work to do in order to improve his team.

The Canucks got through the expansion relatively unscathed, losing a soon-to-be 23-year-old prospect in Kole Lind, while capitalizing on protection issues facing the Dallas Stars to scoop up Jason Dickinson.

Next up is Friday’s NHL Draft, which is traditionally a time for wheeling and dealing. The start of free agency is also just six days away, making this the most important time of year for general managers to improve their teams.

Alex Edler’s agent has already said that his client will test free agency, leaving Travis Hamonic and Brandon Sutter as the two most high-profile pending free agents on the roster.

During Thursday’s media availability, Benning left the door open to re-sign both Hamonic and Sutter, but also spoke about what he’s looking to add through trades or free agency.

“I talked to Brandon a couple days ago and I talked to Travis Hamonic,” said Benning. “We have a lot of moving parts these next few days, but we do have interest in signing both of them. We’re going to just see what these next couple days looks like as far as what we can do, and we’ve talked about internally about trying to bring those guys back.”

A potential trade chip to look out for is Nate Schmidt, who has been in the rumour mill since the season ended. There have been reports that he wants a trade. Benning says he hasn’t been shopping the 30-year-old blueliner, but he is listening to offers, and interest from other teams is high.

“It just seems for whatever reason there’s a lot of interest in him with other teams,” said Benning. “We didn’t put his name out there, teams have phoned to inquire. Somehow, when you talk to other teams, it gets out in the media. We’ll continue to listen on Nate, like we do all of our players that other teams call on.”

Benning also spoke about Schmidt this morning on Sportsnet 650.

“Nate’s part of our team, he’s part of our group,” Benning told hosts Scott Rintoul and Karen Surman. “There’s other teams in the league that have reached out to us on Nate, like they do all of our players. We think he’s a good player, he’s a top-four guy for us, and can play [big] minutes. So, if it’s something that makes sense, we’ll take a look at it. And if not, then he’ll be back.”

“There’s a lot of interest in him. We’ll see where it ends up at the end of the day… I would say the interest on him is very high.”

Given the Canucks are already thin on defence, moving a top-four defenceman like Schmidt would only add to Benning’s shopping list. Whether Schmidt stays or goes, Benning also wants to add size on the back end.

“I think we’re going to try to be real active in free agency to add some [defencemen] with some size and strength. We’ve seen in the playoffs the teams that had some bigger guys back there, that play a physical brand of hockey, they had success. So I think that’s something in free agency that we’re going to be looking at.”

Benning seemed open to the possibility of trading with Kraken GM Ron Francis, who has a glut of defencemen after the expansion draft. He also appeared to have his eye on a few pending unrestricted free agent defencemen that will become available next week.

Aside from defence, Benning said he is looking to add another top-nine forward, after securing Dickinson as the team’s third-line centre.

“We’re working on some things. I don’t know, at the end of the day, what we’re going to be able to get accomplished. I guess time will tell in the next couple days. But we’re working on a bunch of different things. The market right now, with the flat cap world, it’s harder to move money than maybe previously. But we’re going to continue to look at all of our options.”