At first glance, one might think Columbus got the short end of the stick in this trade. They traded away a former 40 goal scorer in exchange for a defenseman who hasn’t quite lived up to expectations and a draft pick that will likely be in the 10-20th overall area. However for the Blue Jackets, there is much more to this transaction than just statistics.

For Columbus, they get rid of player who clearly did not want to be playing there. After he found out he was traded from Philadelphia last year, he sulked and literally went into hiding, away from any media contact. It took a delegation of Blue Jackets management to be able to coax him back out and get him to respond to the trade. It’s understandable to undergo some heartbreak after an event like that, but because of the way he handled the trade, it became such a big ordeal, making him look like a diva.

More importantly, for the organization, they rid themselves of a horrible contract. Carter is signed to a monstrous deal that will pay him 5.272 million a year for the next TEN YEARS. That’s a lot of dough for someone who doesn’t care for the city he’s playing in. Dropping that financial burden will allow the Blue Jackets more flexibility down the road as the look to rebuild their future.

Acquiring Jack Johnson and the draft pick will certainly help in those preparations. The conditional draft pick is a great addition because it gives the Blue Jackets options. Trading Carter and heavily shopping Rick Nash shows they are making a long term commitment to building for the future therefore if the decision comes to take the 2013 draft pick, it’s not a huge tradeoff.

In Johnson, Columbus gets a defenseman who is still growing. In the previous two seasons, Johnson saw his offensive numbers grow, but as is the case with many of his former Kings teammates, his numbers have dipped this season due to the lack of goals scored by Los Angeles. On the defensive side of things, Johnson has never had a positive +/- which is a bad sign for the defensively challenged Blue Jackets. Defenseman have historically taken longer to fulfill their full potential at the NHL level, so Columbus will have to hope that his play in his own end will improve.

For Los Angeles, this deal is an obvious attempt to remedy their goal-scoring woes. With just 129 goals scored on the season, the least scored by any team, Carter’s arrival appears to fix this problem. However there are a couple things that could lead to this trade not working out for the Kings.

Firstly, Carter is a centre. A position the Kings are already deep at with Anze Kopitar and Mike Richards. It doesn’t help that all of them are natural centre’s and aren’t as comfortable playing on the wing. That is where their goalscoring problems really lie. Justin Williams is too streaky, Simon Gagne is always hurt, Dustin Brown has never been an offensive juggernaut and look up plug in the dictionary and you’ll find a picture of Dustin Penner. Unless coach Darryl Sutter can fit one of Carter, Kopitar, or Richards on the wing and find some on-ice chemistry, the Kings will continue to have goal-scoring problems.

Speaking of chemistry, Carter and Richards’ off-ice chemistry has been well documented in the past two years. Word that they partied a lot permeated NHL rumors, and at one point it came to light that the organization had implemented a ‘Dry Island’ program, to try and curb the amount of partying going on. It eventually became so much of an issue that Philadelphia Flyers General Manager Paul Holmgren saw fit to trade both of them at the end of last season. It may be that there is no truth to those allegations, but if that were the case, why trade both of them? Why would a GM trade two of the most important players that got his team to the Stanley Cup Final the previous year? The most likely conclusion is both had become too much of a distraction and they had to be removed from the organization. Fast forward nine months and the two are once again together. The fact they are now in one of the biggest cities in North America will probably lead to a lot more of this: 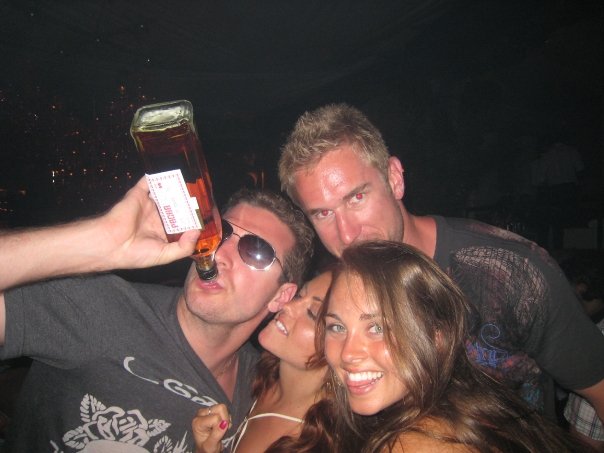 In any case, whether Los Angeles improves or not, Carter and Richards have gone from flying high to living like kings.