Drive, bike or walk down the Burrard Street Bridge and take a good look at the cityscape because it’s about to change. Some may say it’s for the better, others not so much (especially many Kitsilano residents). It all depends on which side of the fence you’re on. The electronic billboard was phase one (although I hardly notice it, like most billboard advertising in this city), 7 to 8 residential and office towers are the next phase.

The Squamish First Nation is going to reclaim its ancestral village in the heart of Vancouver by putting up two major condo towers that will block views to English Bay and the mountains and dramatically change the city skyline.

An early draft of the development proposal features 35-storey and 28-storey condo towers on the south end of the Burrard Bridge, exactly where a giant billboard was erected by the first nation a few months ago. It will fundamentally block the view corridor the City of Vancouver has preserved for decades.

The development, which also dramatically ramps up the density of Kitsilano, will bring an additional 2,000 parking spots and offices that will house thousands of workers. It’s a real-estate play that could near the $1-billion range and generate massive profits. [source] 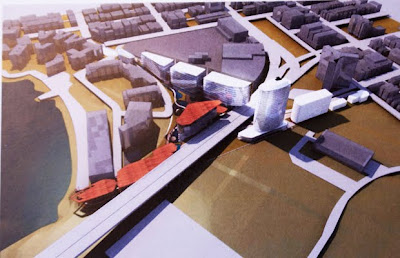 The fact that it is being built on reserve land means they can do pretty much what they want. The city, the province, really can’t block this development from happening. The federal government can, but let’s face it, they won’t.

I am a fan of density and more towers, especially office towers so on that note I like this project. I believe that part of Burrard Street could definitely use more activity. On the other hand, I would also like the development to integrate well with Vancouver’s design principles and also consider the impact on the traffic and transit needs of that area. That part of the preliminary proposal remains to be seen.

All in all I’m in favour of this project for the time being, however, I need to know a little more and see more models of the new neighbourhood before I throw my full support behind it. If they were to get rid of that hideous green building then I’m all for it! I kid, I kid.