HootSuite, arguably Vancouver’s most prized tech company, has made the move to their new nest in Mount Pleasant. On Thursday, the company opened their new home to Vancouver journalists for their official #HootPress tour, and Vancity Buzz was there to get the inside scoop.

For those who don’t know, HootSuite is a social media management system for businesses and organizations to collaboratively execute campaigns across social networks such as Twitter, Facebook, LinkedIn and Google+ Pages from one secure, web-based dashboard. They have three different plans: free, pro and enterprise.

After spending over four years outgrowing their 14,000 sq. ft. Railtown office, CEO Ryan Holmes struck a deal with the City of Vancouver and got to work on renovating the former Vancouver Police Department building on East 8th Avenue.

Holmes spent six months hunting for the perfect location for their new home – and he found it. The new, 33,000 sq. ft. building is more than double their old space, giving the company plenty of room to grow, and is a shorter commute for 95 per cent of their employees. They also kept the original bulletproof windows from the VPD building, so the building is über safe.

“The total bill was around $2 million,” said Holmes. “That’s a big price tag and I was kind of surprised at that. Ultimately a lot of it comes down to sheer size – a lot of carpet, a lot of lighting, a lot of everything. I’m actually pretty proud of what we did given that budget. We took out about 17 tractor trailers of suspended ceiling, cubicles and other things we had to pull out but I think we managed to create a great work environment that will last us for years.”

On Thursday, the company announced accelerated growth in the first quarter of 2013. HootSuite surpassed six million users, just four months after reaching five million users in October 2012. With the new office, they’ve been able to expand their team to a total of 300, including 30 in Europe, and are on track for 350 at their Vancouver office alone.

Their massive growth was mainly due to the increased demand from large global organizations. Currently being used by 79 of the Fortune 100 companies, the company has been able to see exponential growth in the corporate sector.

On the support side, HootSuite will be amping up their customer support to a 24/7 service (currently 24/5). If you’re ever stuck with something, tweet to @hootsuite_help, their team is amazing at responding to users and getting problems solved.

With Facebook opening an office in Vancouver, Holmes was asked how we can keep Vancouver’s talent local. His response was two-fold: first, that there are half a million of some of Canada’s best and brightest living in the San Francisco Bay Area, “a generation that we’re probably not going to get back.” Holmes believes that the way to keep the talent local is to create opportunities and big projects. “We’ve got some really interesting, deep engineering problems that people can sink their teeth into and I think that’s exciting,” said Holmes. “We need to provide interesting challenges and opportunities for people.”

His second point was that universities need to let grads know about opportunities available. “I kind of put a challenge out to univerities that they need to start leading grads this way,” said Holmes. “I’d love to see more graduates coming out from all the programs, especially in technology, engineering and marketing that really understand what the marketplace needs.”

The wow and cool factors

HootSuite is no longer categorized as a “start up” but they sure still have that feeling throughout the entire office. There were so many great things, here’s some of them that stood out.

As a tech company, HootSuite has a lot of hardware. Spread across the two floors are 47 TVs, all over 40-inches, that display anything from HootFeeds (live Twitter streams displaying whatever keyword you want to follow) to analytics to sentiments to mentions. 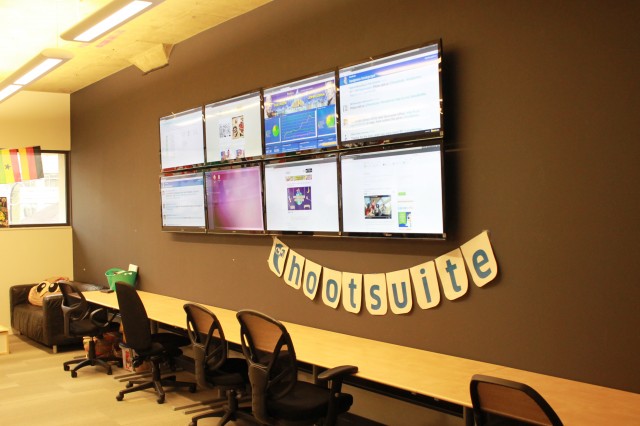 On top of TVs there are also monitors everywhere. Each employee has at one at their workstation plus their own notebooks. The best part, however, is that because each employee is mobile on a notebook, they are not confined to any one particular spot. My favourite was the tents they had set up – literally, tents. They’re not so quiet but they make for a great little getaway to get something done in your own little world. 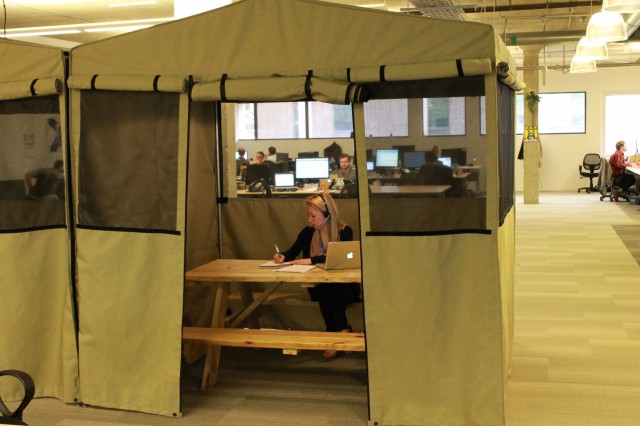 Work’s got you tired? Need a nap? No problem. The “Cabin” is just the place you need. Fitted with cots, blankets and a peaceful environment, not to mention being sound-proof, employees can take a quick break before going back to work. Or at least that’s where we found Community Coordinator Alex Sinclair! 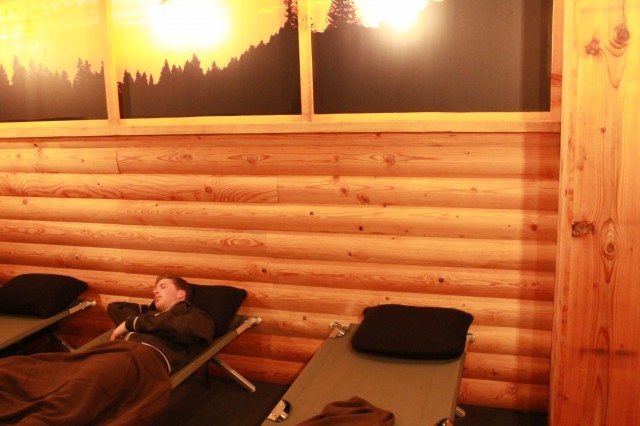 If instead you find yourself with a burst of energy, they’ve also got a 24/7 gym, complete with a locker room and showers, for employees to stay fit and healthy. 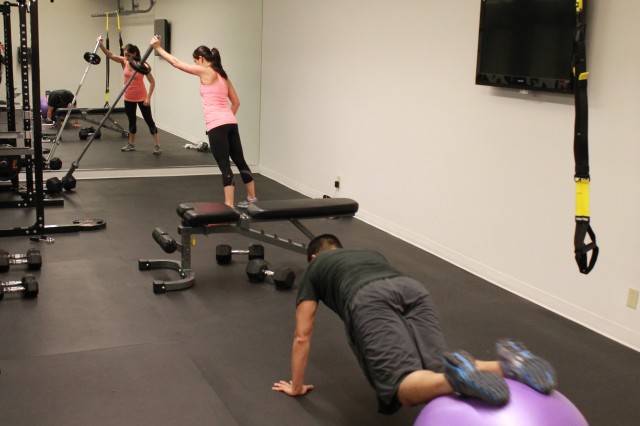 Thirsty after that nap or workout? Head to the kitchen and check what’s on tap! Seriously. You’ll find craft beer and red and white wines flowing in this office. They like to have social nights on Fridays where at least half of the employees will stay to hang out and maybe play some Dance Dance Revolution. 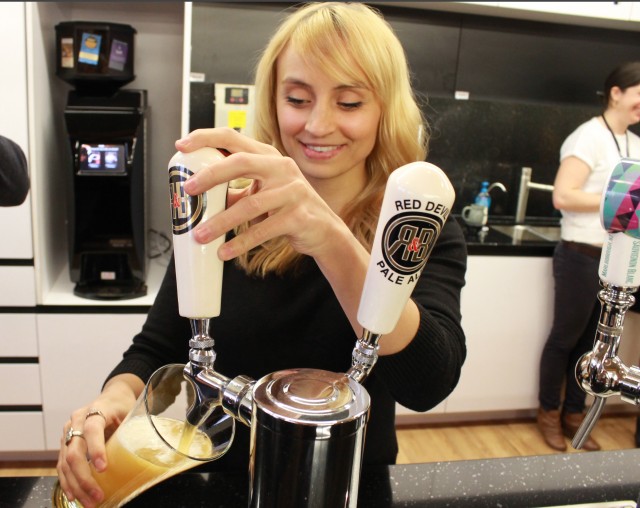 At the end of their lunch room is a stage where they hold lunch & learns, which is an opportunity for anyone to share what they’re passionate about and teach others – be it yoga to taxes. They also invite other companies and members from the community in to share ideas here. 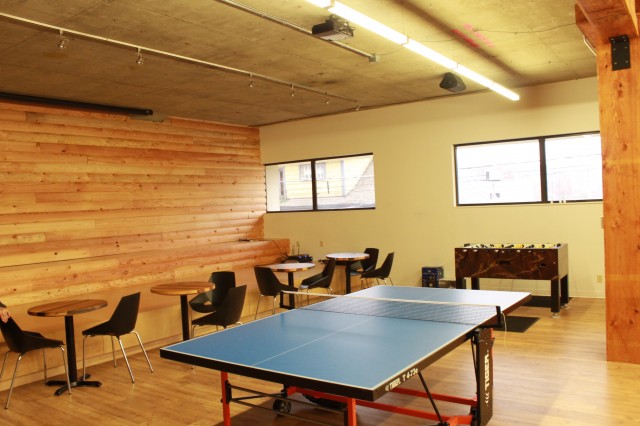 Employees have the ability to have lunch together in a common area on rows of picnic tables, getting to know each other better. 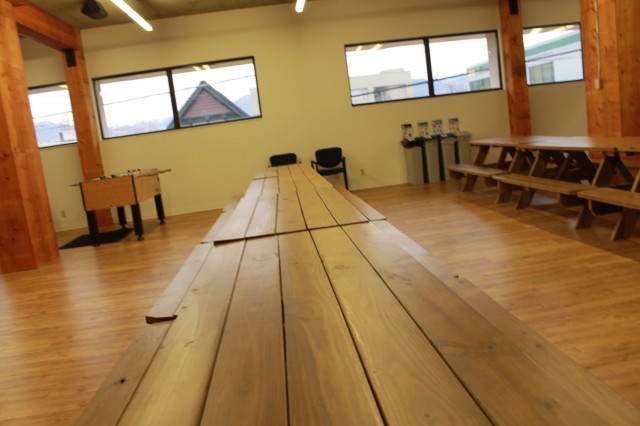 The wood you see around the building was made and designed locally by Naked Wood Design. Ninety per cent is made up of cedar. 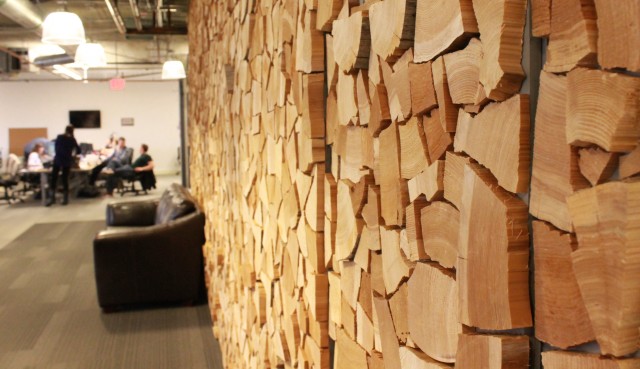 There are murals everywhere. From the moment you walk in, you see this amazing, west coast style piece done by Chairman Ting and Company Policy. 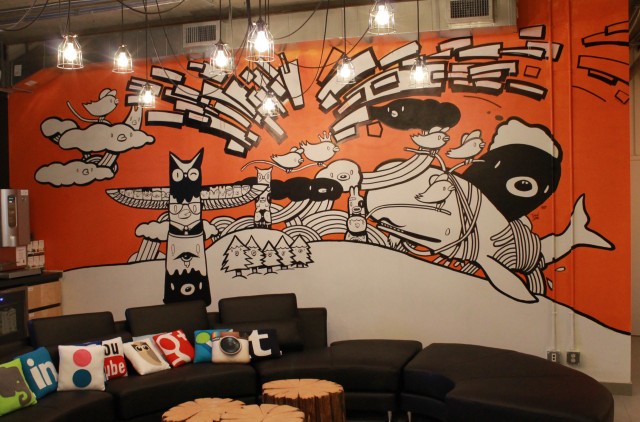 Around the office there are so many more created by Ola Volo (top) and even by employees like Sandy Pell (below), HootSuite’s Communications Manager (and our tour guide). It almost feels like you’re walking through a gallery. 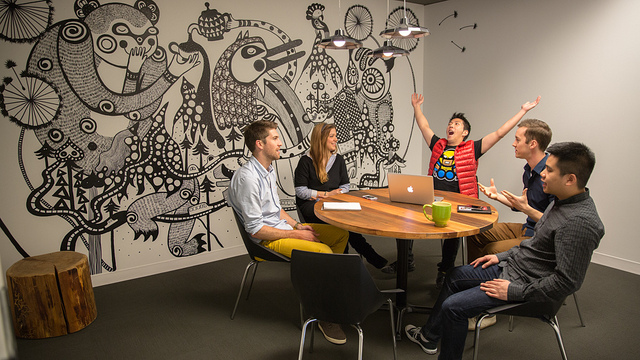 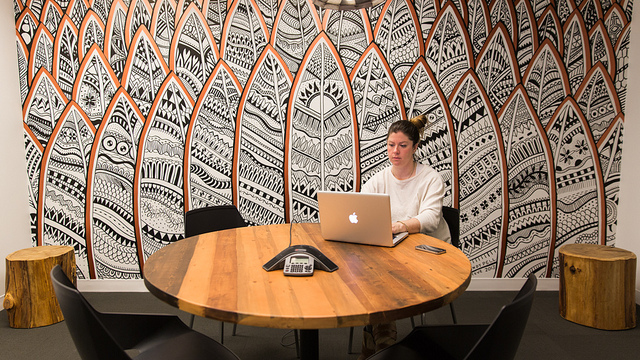 The future at East 8th Avenue

When asked about future plans for the building, Holmes said they’re going to be working on the rooftop. When searching for a location, the rooftop space was a key criteria that had to be met – they need a place for company barbecues and events. It’s bare with rocks right now but they’re planning on bringing in astroturf and picnic tables and creating a year-round facility. With a view of BC Place, Science World and the North Shore mountains, it’s no wonder that this was the perfect location. Too bad it was cloudy though, I can only imagine what it would be like with sun! 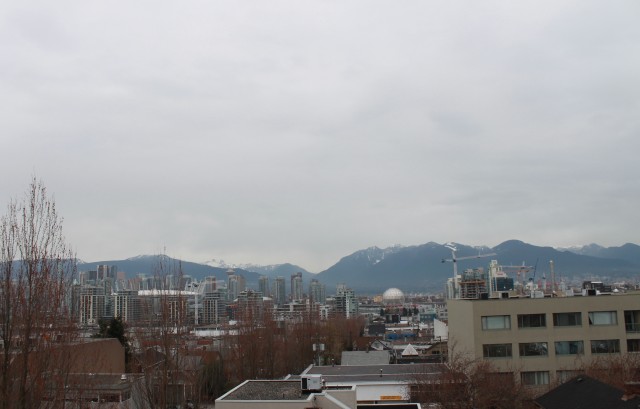 I wanted to find out what the employees thought of the move and had the chance to speak with Creative Director, Paul Donnelly, who has been with the company since the start. “It’s made a big difference,” said Donnelly. “We’ve noticed as soon as we moved in here, everybody’s perception changed of the company and started thinking and asking questions about where we’re going, what we’re doing. Because they realize we’re not just this group crowded down, we’re actually becoming a pretty big company. It set people’s aspirations a little higher to what we can do. It’s been a really positive experience all around.”

HootSuite is always bringing on new talent, hiring 10 new people every week. If you think you have what it takes, you’re not alone as HootSuite’s HR team receives over 700 applications each month! VP of HR Ambrosia Humphreys showed a creative application that someone submitted – the whole thing was done on a pillow (seen below). They had a period of time where a bunch of applications were coming baked in cakes but Humphreys was quick to point out that not everything creative is an automatic acceptance, remember what position you’re applying for and make your application tailored to it.

What kind of people are they looking for? “People that are passionate about doing big things,” said Holmes. “We’re looking at disrupting how people do things that may seem traditional and do it in a different and innovative way and highly involving social.”

There were empty desks all around the office, as the company is currently in the midst of a big hiring phase. If you’re interested in applying, visit www.hootsuite.com/careers and join the conversation on Twitter with #HootHire. 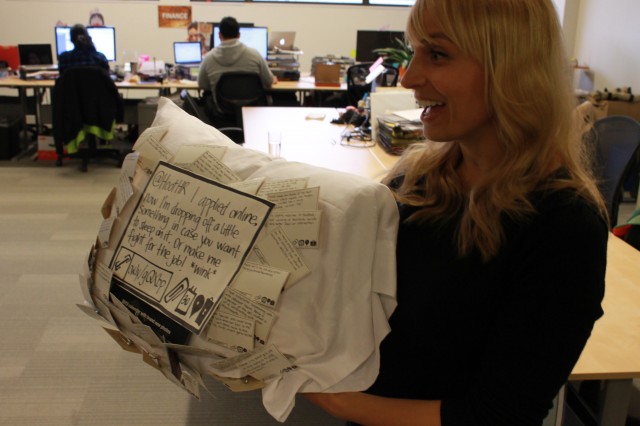 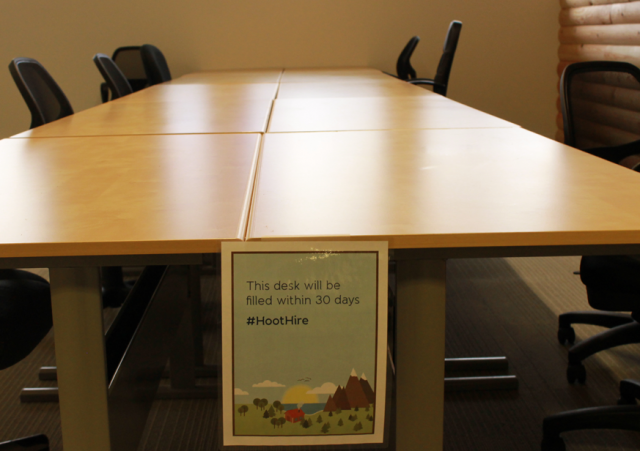 Thanks to the entire team at HootSuite for welcoming us in and letting us snoop around the nest!
Some images seen above are courtesy of HootSuite. For more photos of their office, click here.