There are plans for rapid transit along the Broadway corridor, and not a moment too soon: the 99 B-Line bus is the busiest bus route anywhere in Canada or the US. I flatly refuse to take the B-Line.

There is no question that much of Broadway’s transit ridership comes from Central Broadway (from Main Street to Arbutus), but at the same time much doubt exists over the importance and transit demand that emits from the University of British Columbia.

I drive to UBC when I need to go use the library there, and after a few abortive trips in the past during which I got to watch three or four full buses pass me and then finally managed to squeeze on and stand for an hour, I decided it just wasn’t worth it. I have on occasion walked for an hour rather than ride that horror. The volume is so great, and so constant, that nothing short of a subway will work.

The City of Vancouver, however, has not quite given up on the concept of a mode shift (a transfer) at Arbutus. Some form of tunnelled transit would take riders maddeningly close to the university, which is one of the province’s largest employers and one of the main transit destinations in the city.

Under this plan, the bottleneck at Commercial Station would be moved to Arbutus. As an upside, we would likely eventually get a streetcar (not to be mistaken as light rail) to Granville Island, but we will likely regret (just as how we may already be regretting building obscenely short station platforms for the Canada Line) building two-thirds of a Broadway subway through the underground extension of the SkyTrain Millennium Line.

Transit planners know that mode shifts can be problematic, and fortunately we have a great example to learn from: the abortive subway line to York University in Toronto. 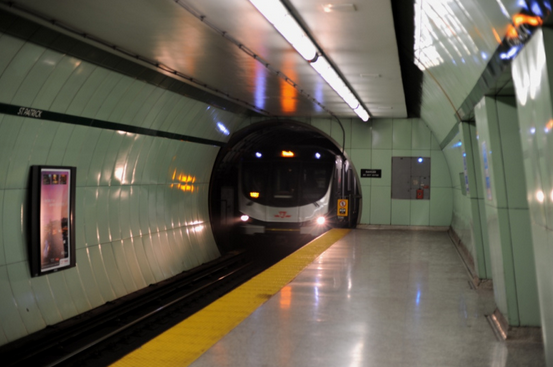 Getting to York from Downtown Toronto has been a soul-sucking exercise since York University first broke ground, and it was generally understood that a subway line would be needed. The Spadina Line, however, was terminated at Wilson Station, and then later Downsview, which is 6.5 kilometers from the university. Thus the commute is a long cold wait at Downsview, and in packed busses that at times took 45 minutes to crawl those 6.5 kilometers.

I could probably sketch every bleak tire lot, every tank farm, every sad strip club along that horrible route. The building of a busway likely helped, but there was no dodging waits at Downsview.

Coming home from an evening out sometimes meant a half hour or more in sub-zero weather, pondering the empty lots surrounding the station. Sartre would have loved it. The mode shift was literally a barrier to York’s development, and the bane of students, faculty, and staff alike. And it kept many, a frustrated rider, in their cars.

York is finally getting its subway; as I write this they are busily tunneling under the university. It took a generation, however, and if we don’t want to stick a generation of UBC students and workers with a wait in the rain at Arbutus, we should build the entire line, as soon as we possibly can.

A needless mode shift at Arbutus will just give us another transit hurdle we need to fix down the line. Ask York. They know.

And likewise, with our very own Canada Line, we may soon regret building a train system that is under-built for its ridership demand. Where were the Canada Line’s vocal skeptics when it not only met, but exceeded, ridership projections during its first year of operations?

With Broadway rapid transit, we have an opportunity to build it right the first time. A full-length subway along the Broadway corridor to UBC, through the seamless underground extension of the SkyTrain Millennium Line, is the one and only long-term solution for rapid transit on Broadway.

Written by Dr. Lenore Newman, a Guest Contributor to Vancity Buzz. Dr. Newman is the Canada Research Chair in Food Security and the Environment, and is also a Geography Professor at the University of the Fraser Valley.

A  route map of Toronto’s extension of its Spadina Line subway, which will reach the York University campus located 6.5-kms away. (Image credit: Lifestyles Realty) 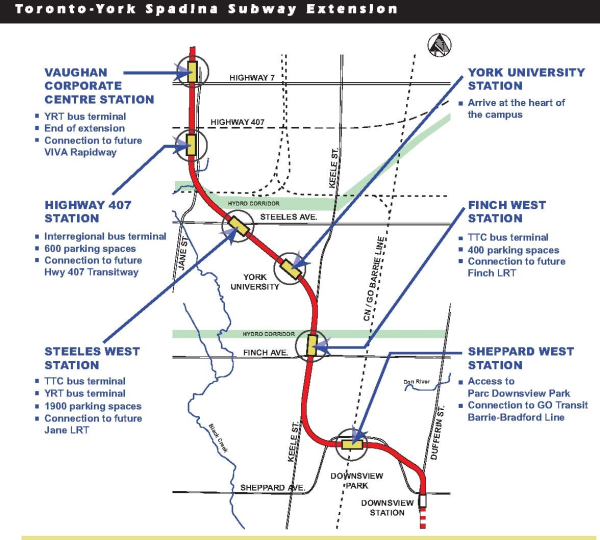