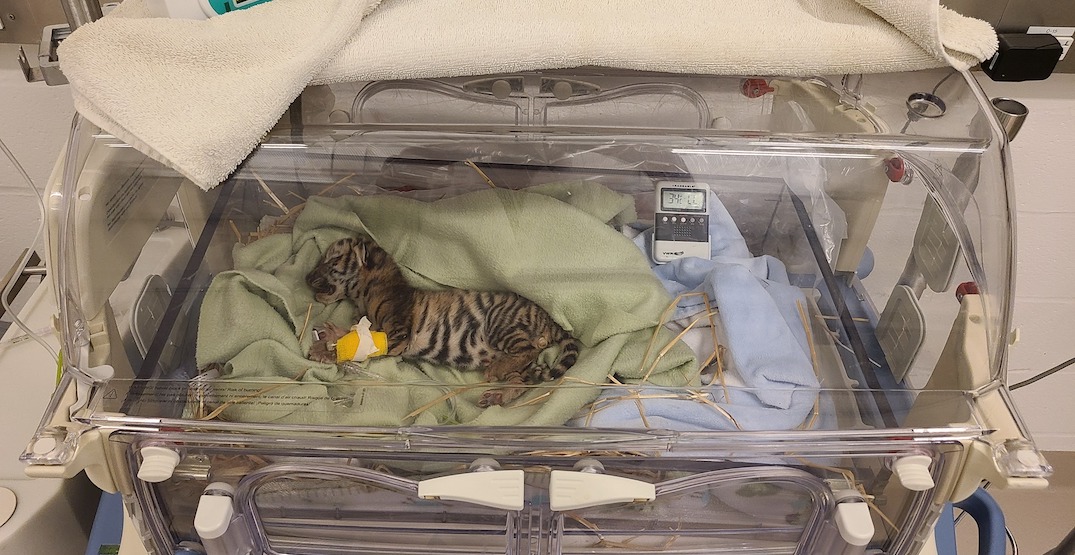 An endangered Amur tiger cub born at the Toronto Zoo at the end of April died on Sunday due to several health complications.

Zoo staff shared news of the cub’s death on Monday in an Instagram post, explaining that they separated the tiger from the other two cubs after noticing the cub was lethargic.

“Early in the morning on Friday, May 7, it was observed by Animal Care Staff that one of Mazy’s tiger cubs, born a week earlier, was lethargic, and Mazy was seen separating this cub from the other two cubs within the den,” said the zoo.

“Our staff veterinarians were successful in retrieving the tiger cub and rushed it to our Wildlife Health Centre’s Intensive Care Unit.”

According to the team, the cub weighed 790 grams, was comatose, severely hypothermic, hypoglycemic, and severely dehydrated.

His condition did not see any improvement except for his blood pressure and hydration level.

After running blood tests, it was confirmed that the cub suffered severe liver damage and electrolyte imbalances due to dehydration.

A stuffed toy with a heartbeat was given to the cub to help give comfort while being separated from his family.

“This approach appeared to make a positive difference in reducing his restlessness while he received treatment,” said the zoo on Facebook.

According to the Toronto Zoo, the tiger named Mazyria, affectionately known as “Mazy,” gave birth to three cubs overnight on April 30 after a 104-day pregnancy.

Zoo staff have been monitoring them closely via remote cameras to minimize disturbance and ensure they bond well. Their first veterinary checkup was scheduled for when the cubs were six to eight weeks old.

In 2007, Amur tigers were downgraded from “critically endangered” to “endangered” by the International Union for Conservation and Nature, and fewer than 500 of them can be found in the wild.

According to the zoo, doctors confirmed that the remaining two cubs are doing well, and Mazy continues to be “an excellent mom” to them.