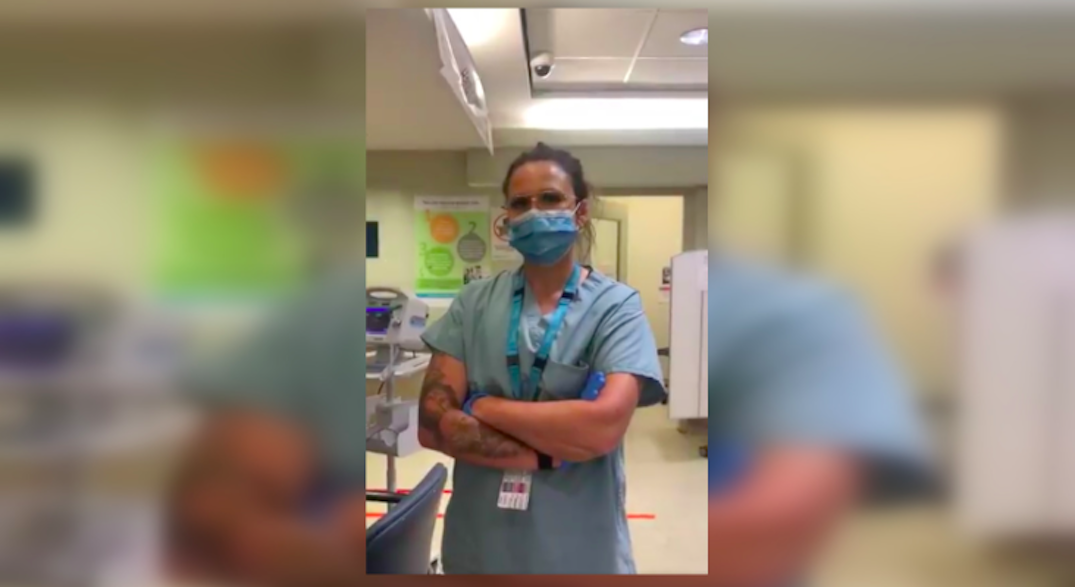 A Toronto woman was denied entry in a hospital after she refused to wear a face mask.

Letitia Montana filmed the scenario and posted it to Twitter, quickly drawing condemnation from local officials, celebrities, and others across the platform.

In the video, Montana says she went to St. Joseph’s Hospital with her son on July 4 for a “suspected broken finger.”

Due to her refusal to don a mask, hospital staff asked her to leave and “immediately called three security guards” to escort her out.

Went into the Emergency Dept. at St Joseph’s Hospital in #Toronto for a suspected broken finger. I was asked to wear a mask, which I refused to do. As a result, hospital staff asked me to leave and immediately called 3 security guards to escort me out. #filmyourhospital pic.twitter.com/7KlDa11udk

“You’re making me wear a mask otherwise you are going to deny me service,” Montana is heard saying in the video, at the front desk of the emergency department.

“Yes, we’re asking you to wear a mask,” a nurse replies.

The video does not show Montana being escorted out of the emergency room.

It has since been viewed almost five million times.

A spokesperson for Unity Health told Daily Hive in an email that masks must be worn by everyone in St. Joseph’s hospital to keep patients, staff, and visitors safe.

The policy follows guidelines set out by Ontario’s Ministry of Health based on the “best scientific understanding of COVID-19 and how it spreads.”

“We encourage all community members to seek care when they need it. At St. Joseph’s and any of our Unity Health Toronto sites, you will be asked questions about any COVID-19 related symptoms, to wear a mask and remember to maintain physical distancing in all parts of the hospital,” the spokesperson said.

On Tuesday, face masks and coverings will be mandatory in Toronto across indoor spaces.

There is a growing body of scientific evidence that suggests the use of masks is an inexpensive and non-invasive measure to help control the spread of the virus.

The bylaw will be effective July 7 and would be in effect until the end of September, when it will be reevaluated by City Council.

There are some residents, like Montana, who believe the face masks can lead to other health problems and is a form of government control.

But many Toronto officials and some celebrities were not having the behaviour.

City of Toronto chief spokesperson Brad Ross warned Montana that she was going to become a verb.

“Put the camera away and don a mask inside public places, *especially* hospitals. Doing so protects others – you know, your fellow humans.”

Put the camera away and don a mask inside public places, *especially* hospitals. Doing so protects others – you know, your fellow humans. https://t.co/CraeNc2GL4

Councillor Michael Ford, who had to be hospitalized after contracting COVID-19 last month, added that her refusal to wear a mask was selfish.

Translation- “I don’t care about you or anyone else but you better care about me” https://t.co/xzlySmwY64

The video even drew condemnation by some celebrities such as Ben Stiller, saying “hospital workers are not propaganda believers. They are trained medical professionals.”

Wear a mask in a hospital if they ask you. Just like those surgeons when they operate. Hospital workers are not propaganda believers. They are trained medical professionals. All the best.

Even actor George Takei took note, saying it was “moronic and entitled.”

However, Montana defended her decision, adding that she was not going to endanger her own life or her son’s to comply with the demands of “some” politicians.

Daily Hive has reached out to St. Joseph’s Hospital and will update the story accordingly.