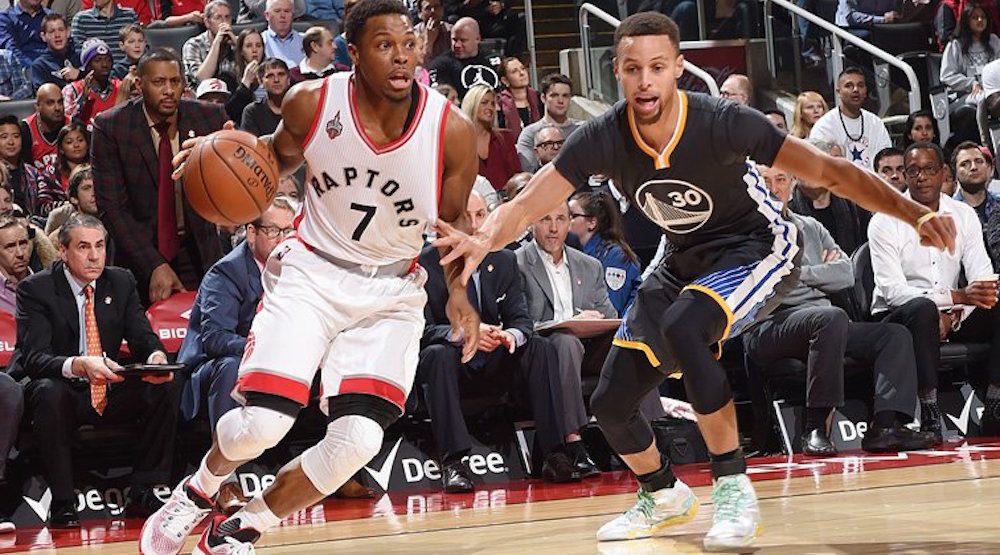 We all know how the Grizzlies experiment went in Vancouver. Winning 101 games in six seasons didn’t exactly excite the local market.

The Toronto Raptors are holding their training camp in Burnaby for the third straight year and will open up their preseason schedule against the Golden State Warriors at Rogers Arena on Saturday.

“I love coming out here, it’s a beautiful country and there are huge basketball fans everywhere,” head coach Dwayne Casey said. “It’ll be rockin’ on Saturday, hopefully for us.”

Casey then made sure to endear himself to anyone hoping for an NBA team to return to the Pacific Northwest.

“I don’t know why Vancouver or Seattle don’t have a professional team.”

Canadian point guard Cory Joseph knows the support is there.

“The game (against the Warriors) sold out in minutes,” he said. “I think that says a lot about the hunger for basketball in the market. I’m super excited for this time of the year getting to play in different cities in my home country.”

“Man, I love it,” Stackhouse said. “I loved it 20-something years ago when I came to play the Grizzlies as a rookie and it’s still a great city. I enjoy spending time here, and I think the guys do as well.”

The two-time NBA All-Star feels Vancouver could support a team now thanks to the greatest Canadian to ever play the game.

“I would love to see it come back here. I think the fanbase has grown here. Steve Nash has done some things here. It still has a basketball vibe here. We’re a little spoiled, we like the fact there’s only one team in the country, and they’re supportive (of us.) It’s such a great city, it’s got everything you want – great restaurants, great scenery – I need to get back here more myself in the offseason. I really enjoy my time here.”

The Raptors will enjoy their time in Vancouver, but this is also a business trip.

Fresh off a record setting season, the Raptors know that the league won’t be taken by surprise in 2016-17.

Winning 56 games and advancing to the conference final where they lost to the eventual NBA champion Cleveland Cavaliers has the optimism at an unprecedented level for the franchise.

“My motivation is knowing what it felt like losing in the playoffs,” All-Star and Olympic gold medallist DeMar DeRozan said. “Being two games away from making it to the finals. Knowing how hard we worked to get there, being able to try and be better so we can see that moment again and try to prevail.”

The players and coaches share the same sentiment on how they plan on getting over the hurdle and playing in the organizations first NBA Finals.

“It’s always about defence. We have talented offensive players, we’ll get better on that side of the floor as the season progresses but our focus is always on defence,” Joseph said.

Losing big man Bismack Biyombo to free agency will hurt. The rim protector and prolific rebounder brought a lot of energy during the teams run to the final four.

“He was big for us last year, but that’s the way business goes.” Joseph continued.

“I feel like he uses his body well, he can rebound, and he brings a little more scoring,” Joseph said of the former Celtic.

Coach Casey has always had a defence-first mentality and that will help the Raptors become tougher to score against.

Another aspect that is being overlooked is having a healthy DeMarre Carroll.

“I’m excited to see him at full strength,” said All-Star point guard Kyle Lowry. “I think a lot of people forgot how good he was defensively.”

The competition will be tougher in the East this season. Atlantic division rival Boston added Al Horford, while the Knicks brought in Derrick Rose and Joakim Noah.

“We know we have a good team,” Lowry said, confidently. “As long we focus on what we need to, we’ll be alright.”

The Raptors play a preseason game against Golden State on Saturday in Vancouver, Denver two nights later in Calgary. They’ll play their first regular season game at home against the Detroit Pistons on October 26.