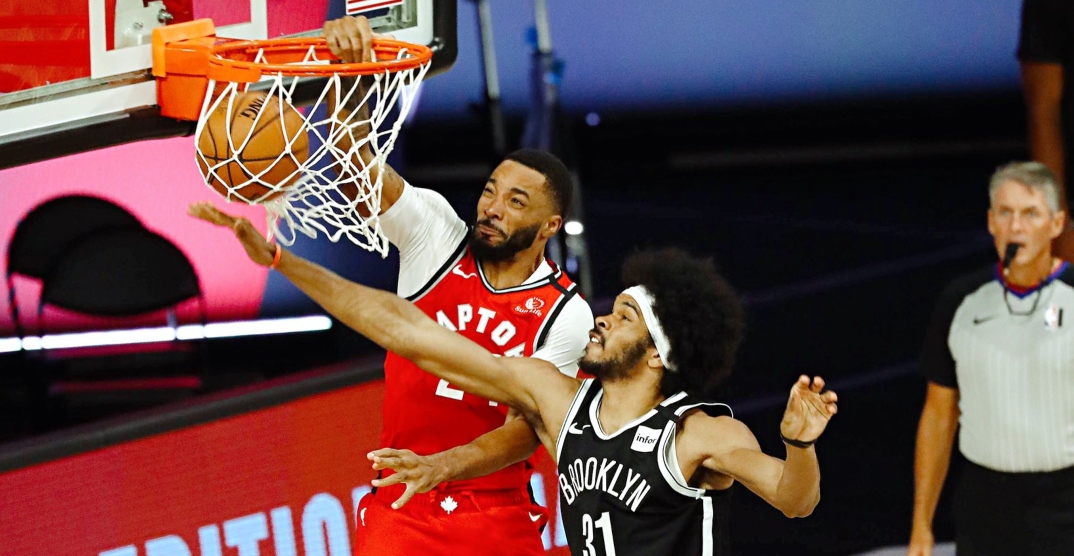 The Toronto Raptors are taking their title defence to the second round.

Their 150-122 win in Game 4 against the Brooklyn Nets on Sunday completed the first sweep in franchise history and set up a date with the Boston Celtics, the Eastern Conference’s third seed that finished off a sweep of their own over the Philadelphia 76ers earlier in the day.

However, it wasn’t all good news for the Raptors on Sunday. An ankle injury to Kyle Lowry in the first quarter soured the celebratory mood a bit.

Kyle Lowry has left the floor after getting his feet tangled with Chris Chiozza 😬 pic.twitter.com/QEdMYxlUoA

Lowry initially tried to keep playing but quickly realized he wouldn’t be able to. He hobbled back to the Raptors’ dressing room and did not return.

With Lowry injured and Fred VanVleet in early foul trouble, there was suddenly a big opportunity for Terence Davis in this game.

Led by Marc Gasol’s nine points, the Raptors led 39-32 after the opening quarter.

Serge Ibaka and Norm Powell also had big first halves. Ibaka scored 19 points and grabbed nine rebounds, while Powell chipped in 16 points of his own.

PLAYOFF POWELL IS A PROBLEM 😤 pic.twitter.com/liJ1scDfxn

The Raptors took a 77-68 lead into halftime, setting a franchise postseason record for most points scored in a half.

With the Raptors looking to wrap this series up in the second half, Powell and Ibaka kept pouring it on.

Powell and Ibaka both had ridiculous days off the bench for the Raptors. Powell set a franchise record for most points off the bench in a playoff game with 29, while Ibaka scored 27 and added 15 boards in just 19:50 of action. The big man shot 12-of-14 from the floor including a perfect 3-of-3 from deep.

Meanwhile, after VanVleet’s halftime buzzer beater in Game 3, Davis decided to try for one of his own at the end of the third quarter.

It was a 116-87 rout through three quarters. The Raptors were 12 minutes away from punching their ticket to round two.

With the game comfortably in hand and the Raptors mostly just hoping to avoid any more injuries, Nick Nurse emptied the bench in the fourth quarter as they cruised to the 150-122 victory.

The Raptors and Celtics are the only teams that have advanced to the second round so far, but know they’ll be facing each other. It will be the first-ever playoff series between the two teams.

Don’t expect another short series against the Celtics. They’ll be a much bigger test for the Raptors. Though the Raps finished five games ahead of the Celtics, Boston won three of the four meetings between the teams this season, including handing Toronto its only loss so far in the bubble, 122-100 on August 7.

Lowry’s status will obviously be the big question for Toronto over the next few days. The good news is the Raptors are a deep team that was able to fight through injuries all season, including posting a 12-2 record when Lowry was out of the lineup, but not having him for what figures to be a very competitive series against the Celtics would still be a tough blow.

“Lowry has left The Field House for diagnostic imaging elsewhere on the NBA campus,” Raptors PR announced midway through the game. “That equipment is not available at this facility. Updates will be provided when available.”