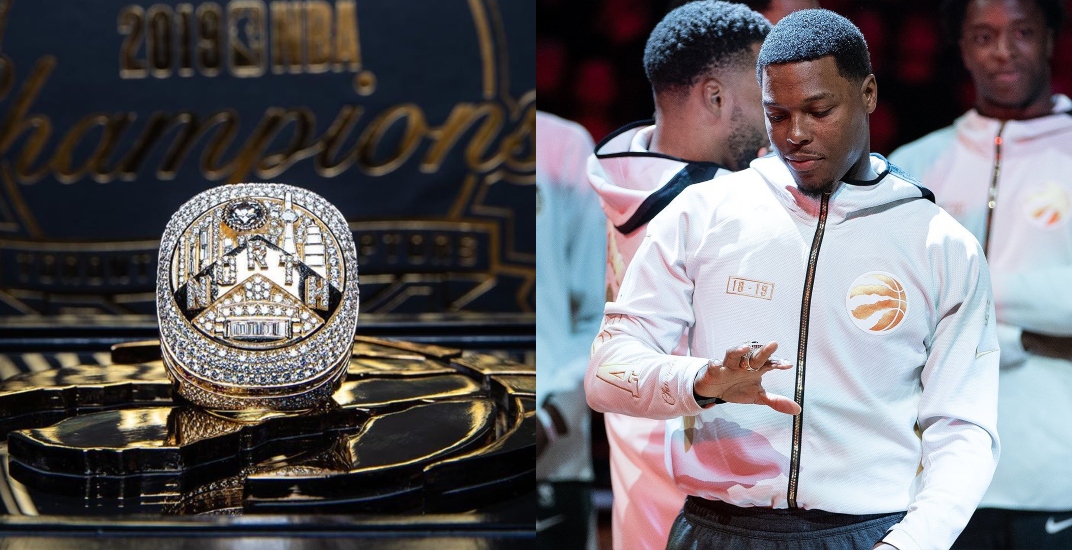 The Toronto Raptors officially tipped off their 2019-20 season against the New Orleans Pelicans, meaning their NBA title defence has officially begun.

Prior to the game, however, the team celebrated the historic achievement of last year with a pre-game banner-unveiling ceremony that included players and staff receiving their championship rings.

It’s tradition that the rings themselves are usually a surprise for the players, but Kyle Lowry was actually a big part of the collaborative design process.

The ring features 74 diamonds on its face, representing the number of wins during the 2018-19 season, and includes the team’s NORTH chevron jersey logo, Scotiabank Arena, hints of the Toronto skyline, and the Larry O’Brien Trophy.

A historic ring for a historic accomplishment. #WeTheNorth

A historic ring for a historic accomplishment. #WeTheNorth

Diamonds and rubies line the outer edges of the ring with the shoulders of the bling featuring the players’ name and ‘WORLD CHAMPIONS.’

Personalized messages unique to each player are engraved on the inside, along with a ruby set inside a maple leaf and the championship series scores.

There’s a lot of details in the #Raptors’ championship rings 👀

The actual ring was created by Canadian-based company Baron Championship Rings in collaboration with MLSE, Raptors Management and Lowry.

“The majority of the input on this ring was Kyle’s,” said Drina Baron-Zinyk, VP at Baron Championship Rings in a media release. “The ownership felt that he was the one best to speak for the team.”

“My hand hurts, it’s a little heavy,” Fred VanVleet joked when asked about the new bling.

As for Lowry, well he had a vision for the ring to represent more than just the team.

“This isn’t just a ring for the Raptors. It’s a ring for the city of Toronto and the country of Canada,” Kyle Lowry said. “The details in the ring reflect things that are important to us and are symbolic of our championship season. I think it’s one of the best rings in the history of the NBA.”

Fans who attended the season opener against the New Orleans Pelicans received replica rings – with just a couple less diamonds – but for Superfan Nav Bhatia, the organization delivered above and beyond.

I don’t know how to put this in words. Thank you to the greatest organization in sports for how much they care about their fans. I accept this championship ring on behalf of every @Raptors fan across the globe. Words do not express what this means to me. pic.twitter.com/iA5VE10V1K

As for the design, overall pretty nice, if you ask us. Well done, Kyle.