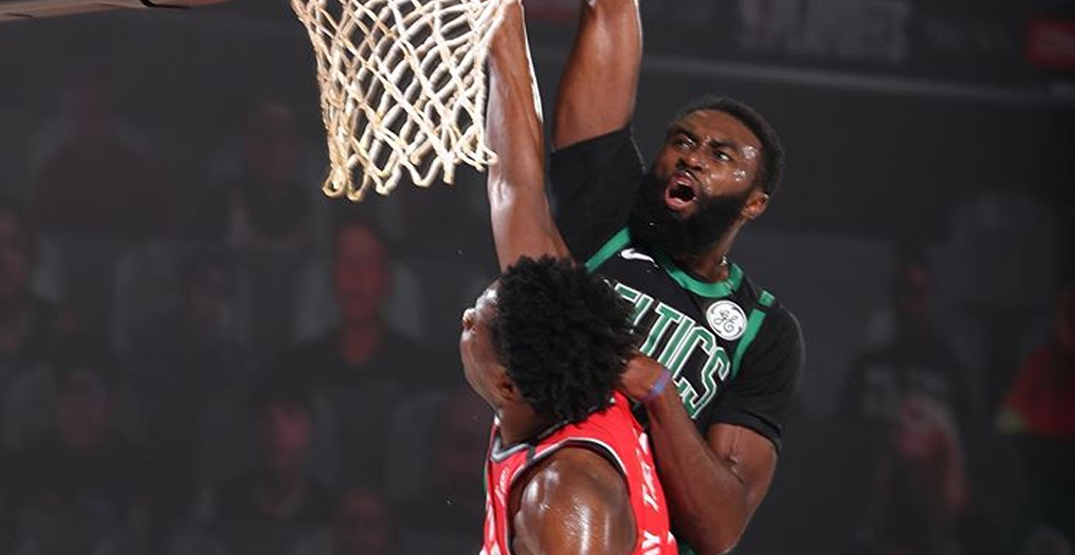 The Toronto Raptors dug themselves out of an 0-2 hole in their Eastern Conference semifinal series against the Boston Celtics. Now, the defending champs need to rattle off another pair of wins to advance, and one more win to fight to stay another day.

The Celtics were in control from start to finish as they trounced the Raptors in Game 5 by a score of 111-89. Fred VanVleet led the Raptors with 18 points, but all five Celtics starters scored double digits, led by 27 points from Jaylen Brown.

The Celtics bulldozed the Raptors from the opening whistle, with Toronto trailing by 27 points at the half, and at one point they were down by 30. They trimmed the deficit to 24 points at the end of the third quarter and closed the gap to 17 points with five minutes left in the game, it was too little too late.

Boston was in control for most of the game, and they shot nearly 50% from the floor, compared to Toronto’s 38.8 field goal percentage.

It was a bit of a case of deja vu for the Raptors, as the Celtics came out strong in Game 1 of the series, winning that contest 112-94. That loss can mostly be attributed to some sloppy shooting from Toronto’s perspective (shooting merely 36.9%), but the Raptors shot slightly better in Game 5 (38.8%), they were just heavily outplayed and the Celtics drained half of their shots on the court.

OG Anunoby was the hero in the dying minutes of Game 3, and he took the bulk of the Raptors shots in the opening minutes of Game 5, draining the team’s first three-pointer. He shot early and often, but only made 3 from 11 from the floor.

Perhaps the Raptors starters felt the ill effects of 40-plus minute games in this series, leaning heavily on Kyle Lowry, Pascal Siakam, VanVleet and Anunoby. None of Toronto’s starters played more than 34 minutes on the floor in Game 5, but Lowry played 40-plus minutes in Games 2, 3 and 4.

The best shooters on the floor for the defending champs were VanVleet and Norm Powell, both sinking six baskets apiece. They also uncorked the most shots for Toronto, with VanVleet making 14 shots and Powell throwing up 15 shots.

Despite the 27-point deficit at the half, the Raptors came out guns blazing in the second half, outscoring the Celtics 28-25 in the third quarter. They also edged Boston 26-24 in the fourth, but by then, the gap was insurmountable.

Earlier in the season, the Raptors overcame a 30-point deficit against the Dallas Mavericks and sealed their biggest comeback in franchise history. If Toronto could’ve worked their magic again in this playoff series, it would’ve been one of the biggest comebacks in NBA playoff history.

Credit to the Celtics, they played an incredibly balanced ball game, with contributions from everybody on the floor. Kemba Walker contributed 27 points and 7 assists for Boston, thanks to great plays like this.

Midway through Q4 on TNT. pic.twitter.com/54dL76SMIK

Kemba has it on a string.

For the first time in the 2020 playoffs, the Raptors face elimination in Game 6 on Wednesday against the Celtics.

A 3-2 deficit in the eastern semifinals isn’t insurmountable by any stretch of the imagination, but Raptors need to look like a completely different team in Game 6 to have any shot of pushing this series to a Game 7.