The 2019-20 NBA season will be one to remember for the Toronto Raptors and their fans.

Coming off the franchise’s first NBA championship, the team has never had more key dates to circle on their calendar at this time of the year.

After a pair of preseason games in Japan, the Raptors will begin the regular season with a ring ceremony and by unveiling their championship banner at Scotiabank Arena on Tuesday, October 22.

Their opponent that evening will be the New Orleans Pelicans, meaning that Zion Williamson, the first-overall pick in the 2019 draft, is scheduled to begin his NBA career on Canadian soil.

The opening game will be one of just two league-wide that evening, with Kawhi Leonard and the Clippers taking on LeBron James and the Lakers in the second half of the nationally-televised doubleheader.

Kawhi Leonard will play his first game against the Raptors on November 11 in Los Angeles, before making his anticipated return to Toronto one month later on December 11.

For the first time in franchise history, the Raptors will host a game on Christmas Day, welcoming the Boston Celtics to Scotiabank Arena on December 25.

Other games to keep an eye on:

For fans in British Columbia and Alberta wanting to check out a game, the closest the Raptors will come is their visit to Portland on November 13.

Other fun facts include: 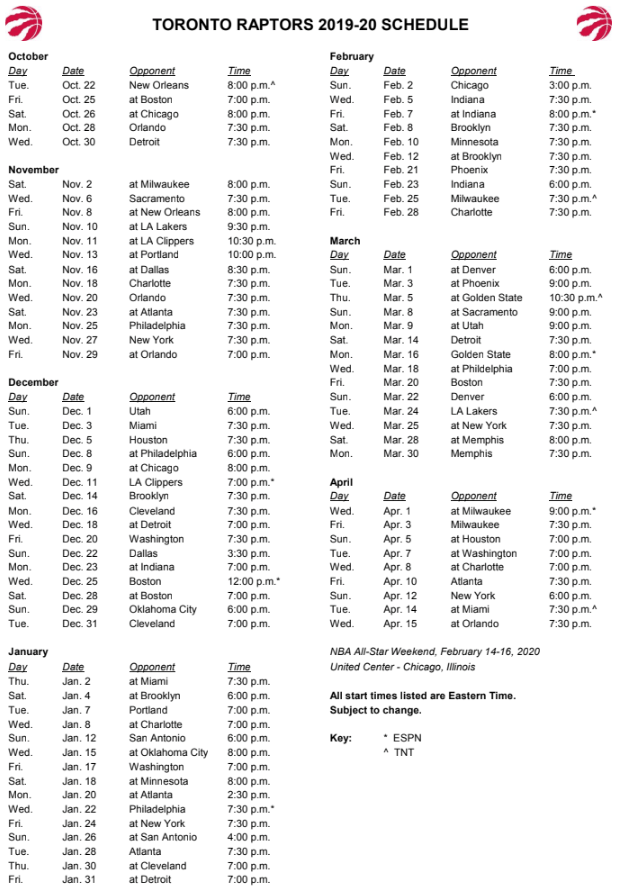