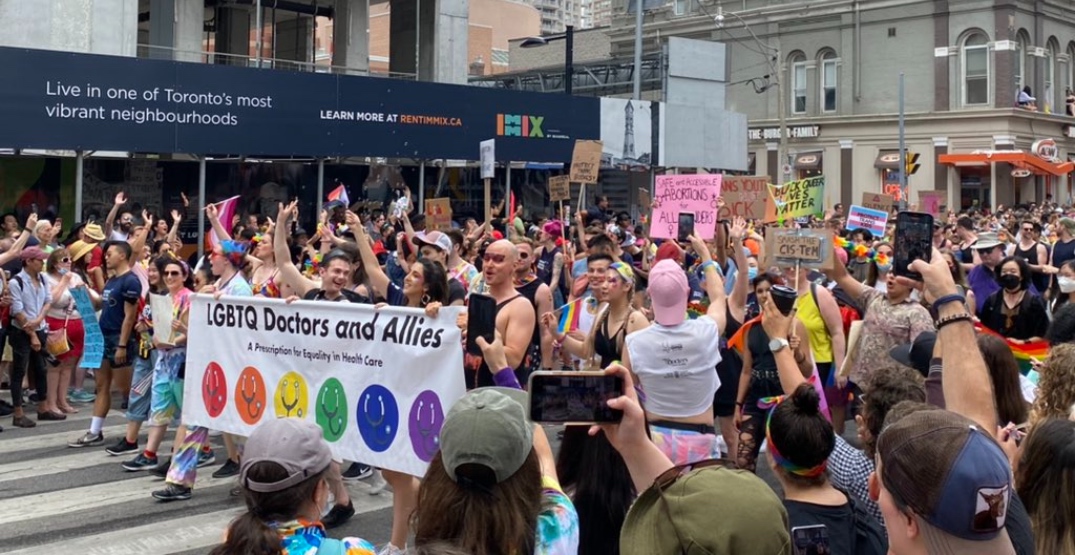 At Toronto Pride, abortion rights were on the top of some marchers’ minds this weekend.

Following the overturning of Roe v. Wade in the US this week, pride events were punctuated by pro-choice messages.

On Saturday, June 25, the Dyke Rally and March was attended by the Ontario Coalition for Abortion Clinics (OCAC). Cries of “Abort the Supreme Court” were chanted by some marchers, the Coalition wrote on Facebook.

Then, during the Pride Parade on Sunday, June 26, marchers with Ontario LGBTQ2S+ Doctors and Allies also showed their support with one sign calling for “safe and Accessible abortions for all genders”.

This year marked the return of the Toronto Pride Parade after a two-year hiatus.

A human rights threat from the US wasn’t enough to stop folks from dressing up in their Pride best, strutting their stuff, and turning out to celebrate Pride in Toronto this weekend, including the Toronto Maple Leafs, Toronto’s Mayor, and NDP Leader Jagmeet Singh.

Toronto we love you!

Guess who I met waiting for the start of #TorontoPride! pic.twitter.com/sENtc7ZTcH