Top Ten Thousand of All Time is an intimate play filled with intricacies of music appreciation, obscure vinyl covers, and 14,000 iTunes tracks.

Did you ever have a friend who was really, seriously into music? The kind of person who could strum every bit of air guitar down to the very last chord? The type who started addressing the musicians during the track as if he knew them personally (alive or not), passing judgment on songs with the obscure bits of musical history?

The first layer of Top Ten Thousand of all Time feels like you’ve stepped into Ron Reed’s personal recording studio.

The second layer sets this play within the confines of a late night radio show in post-apocalyptic Kerrisdale. 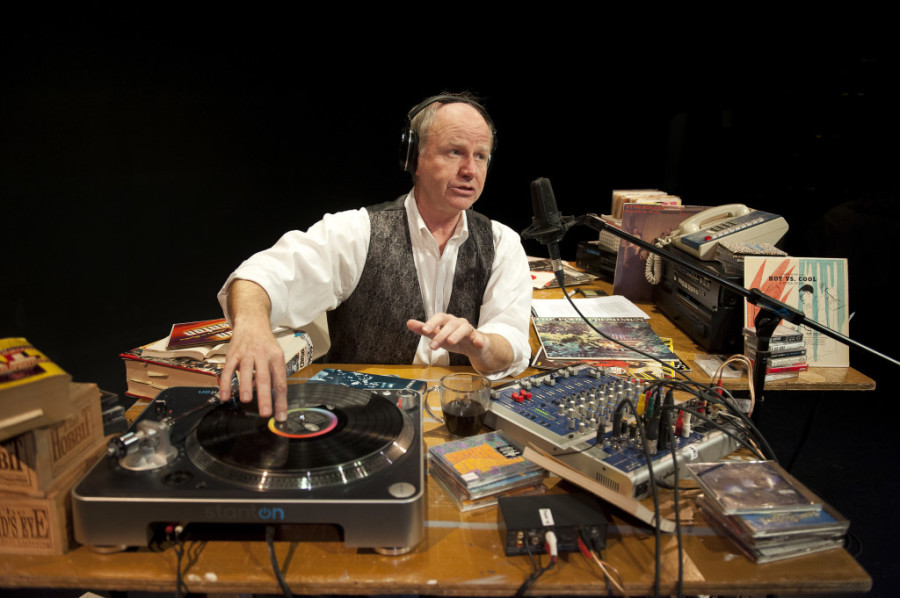 It’s an odd combination that nevertheless works in Reed’s one-man narrative, weaving together personal narrative with a larger, more sinister backdrop. There is no flash and dazzle in Reed’s performance, which makes the tale all the more relatable.

The feeling that Top Ten Thousand drew from me was identical to the space I entered after playing Fallout for a handful of hours, scouring the wasteland as one of the sole survivors of a nuclear disaster. Fellow gamers will instantly grasp what I’m getting at, but the movie The Road might also serve as an apt alternative to the uninitiated. Take out the guns and the random, brutal depictions of violence: it’s the feeling of sheer loneliness that the post-apocalyptic genre portrays, in its beautiful landscapes of desolation and strained relationships between one another.

This is the mood Reed builds and sustains within his remarkable personal masterpiece, and the soundtrack to his life lingers long after you leave the stage.