The Vancouver Convention Centre celebrates an exciting milestone today – the 5th anniversary of the opening of its expanded facility. 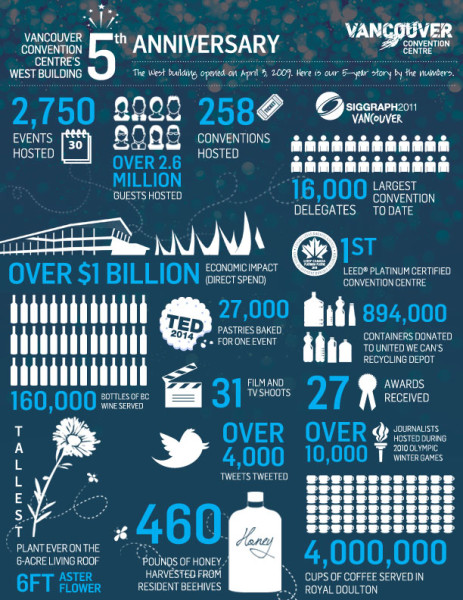 Since opening the West building on April 3, 2009, the Convention Centre has hosted nearly 2,750 events, welcomed over 2.6 million guests from around the world and generated over $1 billion in direct spending for the province.

“It has been a remarkable five years at the Vancouver Convention Centre. The addition of the West building – a truly stunning facility in terms of design, functionality and location – has elevated Vancouver on to the global stage as a major convention destination,” said Ken Cretney, President and CEO, PavCo. “The West building expansion has helped attract an incredible array of global events, including SIGGRAPH 2011 and 2014, Pediatric Academic Societies 2010 and 2014, and TED 2014 and 2015.”

“The world needs great gathering places and Vancouver is one of them – and the lynchpin in that reputation is the Vancouver Convention Centre,” said Rick Antonson, President and CEO of Tourism Vancouver. “As residents, we enjoy seeing delegates from around the globe walking our streets, dining in our award-winning restaurants and playing in our scenic outdoors. Science, medical research, the environment – leading minds meet here because Vancouver provides the best setting for inspiration and innovation, anchored by the Vancouver Convention Centre.”

Top 5 events that happened at the Vancouver Convention Centre

The Vancouver Convention Centre played host to 10,000 accredited journalists and broadcasters during the 2010 Olympic Winter Games. The East Building at Canada Place was converted into an area for the press while the new West Building was transformed into studio and working spaces for international broadcasters. 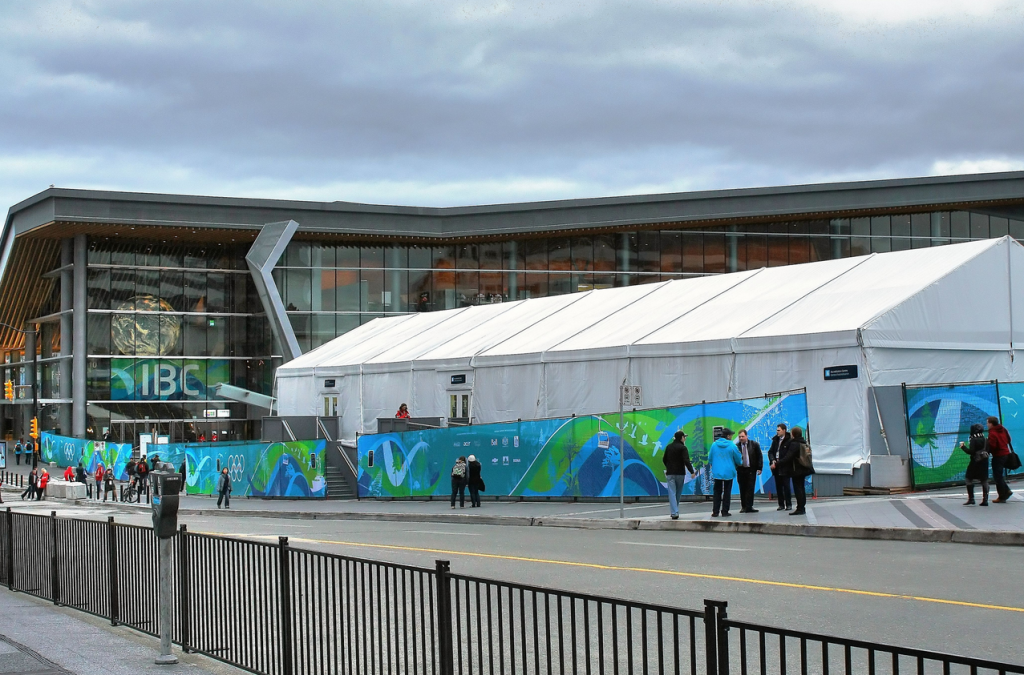 The conference even built a 1,200-seat pop-up theatre inside the West Ballroom of the expansion building. It is now dissembled and in storage for reuse when TED returns to Vancouver in 2015.

In the summer of 2011, the Vancouver Convention Centre hosted the annual conference of the Association of Computer Machinery Special Interest Group on Computer Graphics and Interactive Techniques (SIGGRAPH). Held for the first time outside the US, this was the largest convention in Vancouver’s history, attracting over 16,000 delegates in the digital arts community representing 74 different countries.

SIGGRAPH enjoyed its Vancouver experience so much that it will return to the city for the second time this summer!

The world’s top international meeting and event planners also have a convention of their own. In 2010, Meeting Professionals International’s World Education Congress brought 2,600 meetings professionals to Vancouver. This was a rare opportunity to showcase the Centre’s new expanded facility and the city to some of the most influential decision makers in the meetings industry.

Vancouver has likely never before seen such engaged, idealistic, and well-dressed young men and women descend descend upon it as during the 21st annual World Model United Nations Conference.

The conference was held mainly at the Vancouver Convention Centre and brought in more than 2,000 student delegates from over 200 universities in 60+ countries to Vancouver for a week of diplomacy, debate and social events. It was a partnership between students at Harvard University and the University of British Columbia.