The Vancouver Grizzlies did not have a storied history. They won 101 games and lost 359 in six seasons. Their best season was their last season in 2000-01, when they finished with a 23-59 record, good enough for 4th worst in the NBA.

You get the idea.

So I get that picking a list of all-time Grizzlies’ greats (using the word “great” loosely) may cause you to chuckle. But who cares?! We all love lists and you’ll love (like?) this one too!

With apologies to Ashraf Amaya and Pete Chilcutt, here are the top-10 Vancouver Grizzlies of all-time: 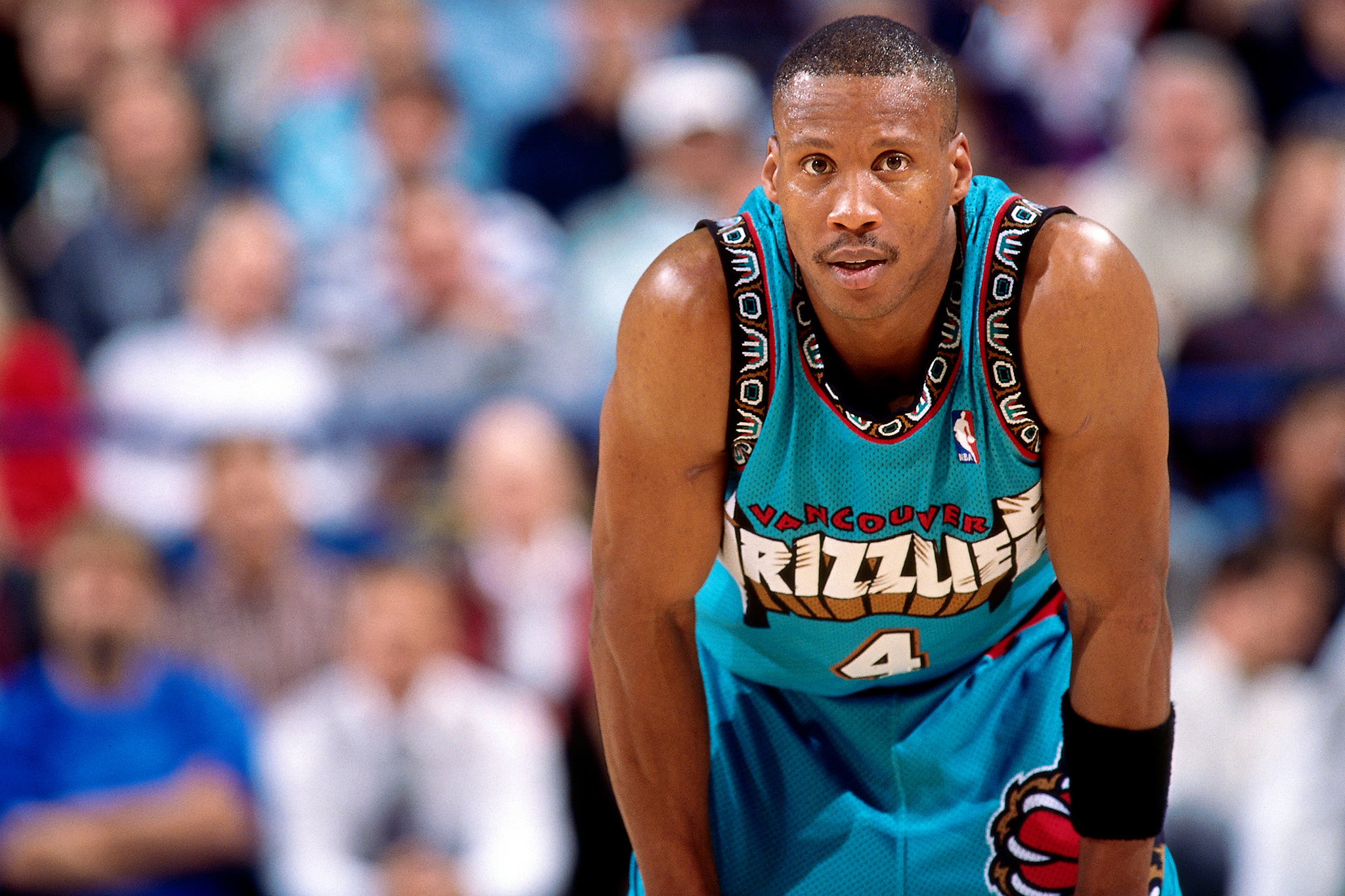 Byron Scott was an original member of the Vancouver Grizzlies. Scott had an excellent career, mostly with the Los Angeles Lakers, where he won three NBA Championships. He was 34-years-old by the time he got to Vancouver though, so he came off the bench. He was the perfect type of veteran to mentor young players, while averaging 10.2 points in 23.7 minutes per game. Not bad. 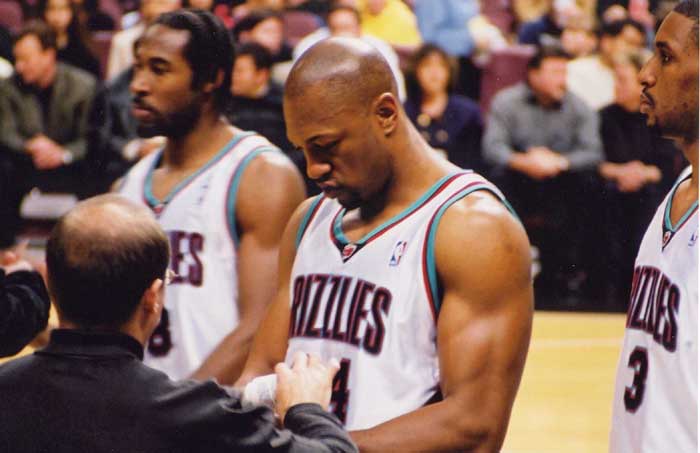 Tony Massenburg spent a lot of time in Canada during his NBA career. An inaugural member of the Toronto Raptors, Massenburg also had two tours of duty with the Grizzlies.

Massenburg played 156 games for the Grizz, starting in 68 of them. He could be characterized as a hard working player, who was a hard nose defender and a tenacious rebounder. His best season was in 1998-99, when he averaged 11.2 points and 6 rebounds per game. 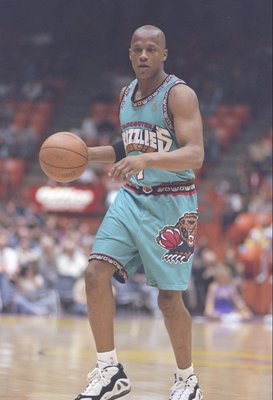 Peeler was traded to the Grizzlies in the summer before their second season in 1996 and he made an instant impact. He averaged 14.5 points per game in 1996-97.

Peeler was traded to Minnesota for Doug West partway through the next season, which is probably a trade that Stu Jackson would like to have back (he’d like to have a few back, I imagine).

Harrington was one of the players acquired from Houston for Steve Francis and will be remembered most as a guy that complained about living in one of the most beautiful cities in the world. Here’s an excerpt from the Vancouver Sun in 2000 when Harrington expressed his disappointment that the Grizzlies were not going to be moving to St. Louis:

Harrington, 25 and a native of Jackson, Miss., said he meant no disrespect to fans, “but I was hoping for a move.”

Nearly from the moment he arrived in Vancouver after being acquired in an off-season trade from Houston for, among others, reluctant draft pick Francis, Harrington has made it clear he’s not enamoured with the weather, the culture and the high Canadian taxes.

“How many people have been here and said the same things I’m saying?” Harrington said Friday after a practice at GM Place. “It’s not a prerequisite that I like it here.”

Harrington was traded after a year and a half in Vancouver, but he produced reasonably well (by Grizzlies standards) in his first season in teal. He started all 82 games for the Grizzlies in 1999-2000, putting up 13.1 points and 6.9 rebounds per game.

When you see his name, you can probably still hear Grizzlies PA announcer Al Murdoch saying “Bluuuuuuuuuuue Edwards!” I’ll always remember his unorthodox defending of the other team in-bounding the ball when he would jump and kick his legs out to stop a pass.

Edwards played three seasons in Vancouver, starting all 82 games during the Grizzlies’ inaugural season. That was his best season in Vancouver, contributing with 12.7 points, 4.2 rebounds, 2.6 assists and 1.4 steals per game.

Greg Anthony was the Grizzlies’ first pick in the expansion draft in 1995 and provided stability at the point guard position during the franchise’s first season. He led the Grizzlies in points (14) and assists (6.9) per game in 1995-96.

He was released by Vancouver after their second season, paving the way for 1st round draft pick Antonio Daniels to become the team’s new starting point guard (you’ll notice Antonio Daniels did not make this list).

Ah, Big Country. You know him, you hate him, but you still kind of love him, don’t you? He’s remembered for being overpaid and out of shape, but it wasn’t all bad times for the Grizzlies first-ever draft pick.

Here’s some of his country bumpkin charm that fans fell in love with.

Reeves was a 7-foot centre with a good jump shot, and he was actually starting to realize some of his potential in his second and third seasons. “Country” as his teammates called him, averaged over 16 points per game in 1996-97 and 1997-98.

Then the NBA lockout shortened season of 1998-99 hit and Reeves was more out of shape than ever before. He was never the same player after that. His career ended due to injury after the 2001 season and he never played a game for the Memphis Grizzlies. 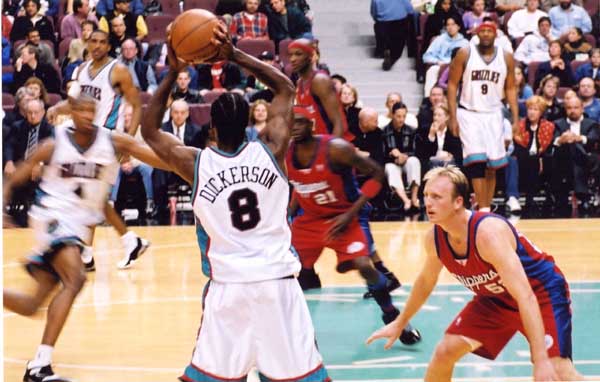 Michael Dickerson is probably the most underrated Grizzlies player of all-time. Acquired along with Harrington in the Steve Francis trade, ‘Mike D’ played two seasons in Vancouver and is easily the best shooting guard the Grizz ever had.

Dickerson finished second in scoring in both of his seasons in Vancouver, finishing second to Shareef Abdur-Rahim. His best season was in 1999-2000 when he averaged 18.2 points per game and had a .409 three point shooting percentage.

Chosen with the second overall pick in the 1998 NBA Draft, Mike Bibby instantly became the team’s starting point guard, and was a consistent contributor for three seasons in Vancouver. He never missed a game with the Grizzlies and he started every single one of them. His best season was in 2000-01 when he averaged 15.9 points and 8.4 assists per game.

Bibby went on to have a nice career after Vancouver. He was traded to Sacramento before the team moved to Memphis, and was a key contributor for the Kings.

Shareef Abdur-Rahim was drafted after the Grizzlies’ first season in the NBA and was their best player and leader for the remaining five years in Vancouver. He led the team in scoring for five straight years and led them in rebounding for the final three. He was named to the All-Rookie team in 1997. In 1998-99, he ranked fourth in the NBA in points per game.

Abdur-Rahim was the first star player the Grizzlies ever had, and he embraced the city. When other players were demanding out of Vancouver, their best player did just the opposite. He signed a 6-year, $71 million contract extension in 1999, rather than leaving in the offseason in free agency.

Shareef was never named to an NBA All-Star Game during his days in Vancouver (although his numbers suggested he should have), but he won an Olympic gold medal in 2000 while as a member of the Grizzlies.

The Grizzlies’ time in Vancouver was tumultuous, to say the least. Fans saw a whole lot of losing and some terrible teams, but it wasn’t all bad. Having NBA basketball in Vancouver was fun while it lasted, and I miss it.