With Vancouver holding the crown as Canada’s food cart capital and new carts hitting the streets almost weekly, I figured it was about time someone created a definitive Top 10 Vancouver Food Carts list. Well, this list isn’t exactly definitive, it’s just my perspective after countless meals served on a sidewalk, but it does highlight 10 food carts that are creative culinary crusaders. Yet only one can be the best. Who is the grand champion in the ultimate battle for Vancouver’s food cart supremacy? Let’s find out.

My love for grilled cheese is well documented. I reviewed the two prime grilled cheese contenders a few months back and Taser’s came out on top. With four great staples to choose from and an intimacy that you don’t find with some of the much larger food carts, Taser Grilled Cheese is able to deliver delicious grilled cheese sandwiches better than Mom used to make at a price that won’t make you feel like you just put a cheese sandwich on layaway. Try the So Gouda or Vampire’s Bite (my two favourites), you won’t be disappointed.

Follow the Taser girls on Twitter and look for them Monday to Friday on the corner of Main Street and Terminal Avenue.

La Bohéme Creperie is a hidden gem of Vancouver’s food cart scene. Much like their name implies, this cart takes a rather bohemian attitude towards life… and the Internet. They have no website, no Twitter and no Facebook. Hard to believe that anyone could have any friends without the Internet yet La Bohéme Creperie has many. Their organic buckwheat crepes are a perfect complement to an eclectic variety of sweet and savoury fillings and when you finish you can’t wait to return. Amongst the sweet crepes, I love the Ricotta & Nutella. Top notch. When I’m feeling savoury I usually go with the Québecois, a blend of béchamel sauce, cheese, ham, apple compote and maple syrup. No crepe is over $9, with the sweet crepes usually costing less than the more loaded savoury varieties. 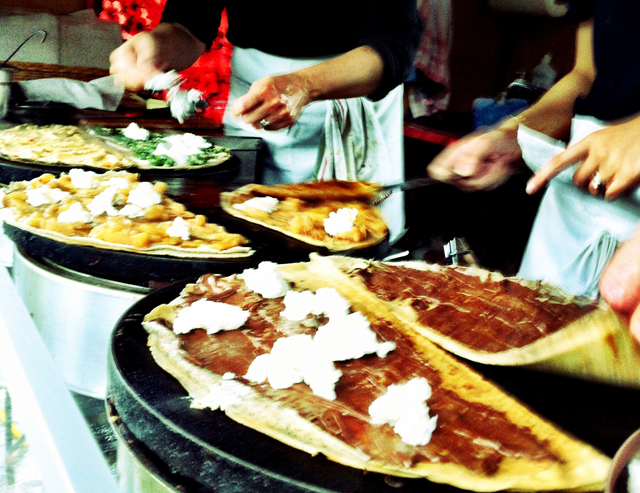 Keep your eyes peeled for this uniquely painted food cart parked at the Trout Lake and Kitsilano Farmer’s Markets every Saturday and Sunday. It will be the only purple caravan with a lineup.

The name Vij has a lot of clout amongst Vancouver’s culinary scene so it makes sense that master chef Vikram Vij’s foray into food carts would also be a success. Vij’s Railway Express offers all the delicious tastes of India you can expect at Vij’s, without all the waiting and restaurant prices. While this cart might not be known for heaping portions, I can attest that every dish they serve is made with great care and of the highest quality. When I want to eat fancy food cart food, Vij’s Railway Express is my first choice. My favourite is the butter chicken schnitzel, a dish that before Vij’s only existed in my dreams.

I wrote more about Vij’s Railway Express a few months back and you can read that here. Read enough already? Look for the blue truck downtown Monday to Friday between Burrard and Thurlow.

Johnny’s Pops is new to Vancouver’s food cart landscape in 2013 but don’t let his rookie status fool you. Johnny is a true player. His homemade popsicles have already gathered quite the following and his unique bike cart is a welcome sight on a sunny Vancouver day. With flavours such as Salted Caramel, Creamy Strawberry Lemonade and Blackberry Mojito, it’s easy to envision kids and adults alike queuing up for these perfect summer treats. Johnny prepares all his creations himself and then peddles them down to the Seawall or any other spot he likes that isn’t downtown. Make sure you bring $6… that will buy you two! 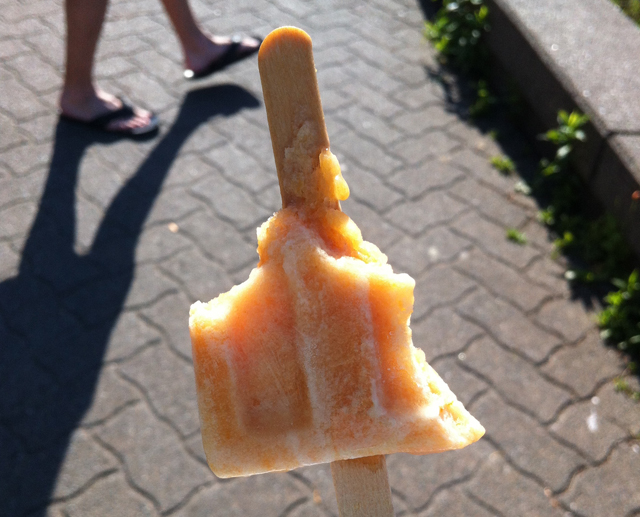 Johnny is a really tall dude riding a big red bike with a cooler on the front, so he’s pretty easy to spot. If you don’t want to play a game of “Where’s Johnny?”, follow him on Facebook and Twitter and you’ll always know where to get your popsicle fix. Read my previous breakdown of Johnny’s Pops here.

We have already seen two unconventional food carts on this list: a bohemian caravan retrofit into a delicious crepe factory and a bicycle built primarily for popsicles. PazzaRella also has a unique food cart feature: a wood burning pizza oven! I personally believe that pizza is mankind’s greatest culinary achievement (and I’m not even a Ninja Turtle) so this food cart has gone straight after my heart. With homemade, hand-stretched dough made with flour imported from Naples that is cooked to perfection at a ferocious 800 degrees, these pizza pies are a true taste of the old country. I love the prosciutto & arugula pizza and you can never go wrong with the classic margherita.

Vancity Buzz’s Veronique St. Antoine recently reviewed PazzaRella and you can read that here. To find Vancouver’s best food cart pizza, look for the red truck with the chimney parked downtown at Victory Square on the corner of Hamilton and Pender Street. Cash only.

While this article focuses on food carts, I couldn’t disqualify The Juice Truck just because the majority of their offerings are in liquid form. The Juice Truck has been redefining the phrase “liquid lunch” for those who frequent Gastown and they are also the healthiest food cart on my list. Their delicious cold pressed juices and smoothies are prepared with only organic ingredients (except the pineapple) and you can even order a salad prepared by their food cart brothers Culver City Salads if you’re feeling like a meal. My favourite smoothie is the Avocado Pineapple, a delicious blend of avocado, pineapple, coconut water, lime, vanilla and medjool dates. I’ve made a lot of smoothies at home in my day and none of them come close to this.

Guess what? I’ve written more about The Juice Truck before and you can read it all here! Next time you feel a bout of scurvy coming on, head down to the corner of Water and Abbott. The Juice Truck will sort you out.

Reality shows are pretty much all that is on TV anymore so it seems inevitable that you’ll meet someone who has been on one. Turns out that one of the founders of Le Tigre, Clement Chan, was a contestant on Top Chef Canada and while he didn’t win, his food cart is a victory for the foodies of Vancouver. Along with Steve Kuan, the duo aren’t famous for being a legendary indie band from New York but are still pretty awesome thanks to my two favourite dishes: Beet Fries and Kick Ass Rice. The Beet Fries are something else, I’ve never seen such a dish anywhere before. The Kick Ass Rice truly does, with an egg and either popcorn chicken or braised pork belly topping spicy rice cooked in a mixture of sake, butter and Japanese stock. This is one of the most popular dishes amongst all of the many Vancouver food carts. Go try it.

The dudes in the funny glasses pop up all over town so go to their website and memorize their schedule. Or follow them on Twitter, that’s probably easier. Veronique wrote a great write-up on Le Tigre too, you can read it here.

Breakfast is all sorts of awesome. It really is. And not many food carts specialize in the most important meal of the day, shunning early morning commuters for the popularity of the lunch crowd. Yolk’s food cart is the exception. As the name cleverly implies, the folk’s at Yolk’s like their eggs runny… and so should you! Don’t worry, they’ll give you a wetnap. Their specialty are perhaps the finest poached egg and English muffin sandwiches you’ll ever eat. My favourite is the double smoked bacon and arugula, served with the customary truffle-lemon potato skewer. A perfect way to start your day. They also do chicken and waffles as a daily special. If they are featuring it while you visit, give it a shot. It’s as awesome as it sounds. Heck, everything I’ve ever tried from here has been an absolutely delicious way to start my day. 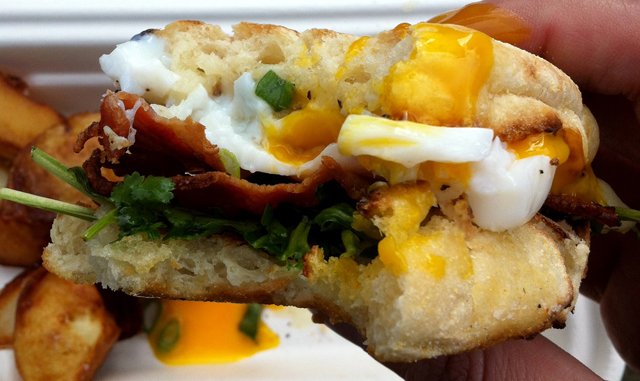 The baby blue beacon of a bountiful breakfast can be found on the corner of Beatty and Dunsmuir, just outside the Stadium-Chinatown SkyTrain Station. Follow them on Twitter as they often show up at Farmer’s Markets and other events around town.

2. Pig On The Street

While this is my favourite Vancouver food cart, it isn’t #1 (more on that soon). For Pig On The Street, there is no need to be sad about finishing in second place. With another marvel of engineering, Pig On The Street is a modified Westfalia van where I’ve seen three people cram in and make some of the tastiest pig wraps the Lower Mainland has ever seen. Bringing over their own style of bacon sandwich street food from England, owners Krissy and Mark have established their cart as one of Vancouver’s true gems. Using only the highest grade local bacon and a variety of local and organic ingredients, Pig On The Street makes even the strictest of vegetarians second guess their beliefs. Plus, they even make their wraps from scratch! The Porker is my go-to, and with double smoked bacon, sausage and bacon stuffing with sage and apple, goat gouda, fresh greens and apple and cider chutney it should be easy to imagine why. 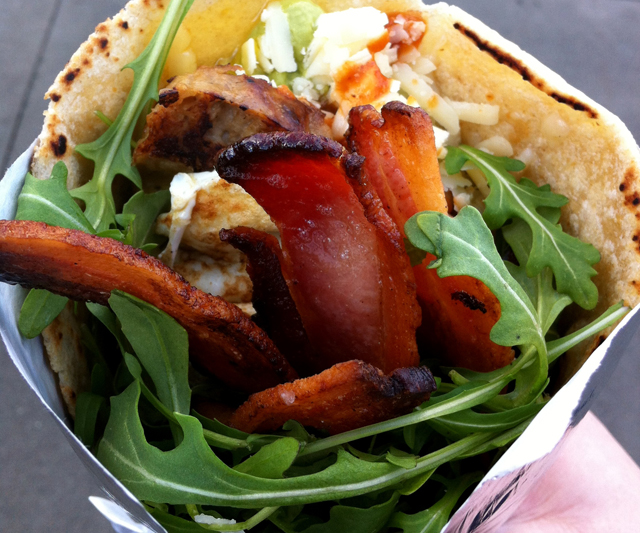 When you find the bright pink Westfalia feel safe in the knowledge that anything you order will be delicious. You can usually find them outside the Vancouver Art Gallery for lunch on Tuesday and Wednesday, but you better follow them on Facebook and Twitter to be sure. And make sure you ask for David Hasslehog.

I truly believe that one of the reasons Vancouver has such a robust roster of creative, genre smashing food carts is JAPADOG. Started in 2005 by Noriki Tamura and his wife, JAPADOG is perhaps Canada’s most famous food cart and was a shining symbol of creativity and flavour before the recent food cart explosion, back in the dark ages when Vancouverites only street food options were hot dogs and roasted chestnuts. My favourite is the Terimayo, a unique hot dog covered in teriyaki, mayo and seaweed. The collision of Japanese ingredients with the All-American hot dog are absolutely delicious and will make you reconsider the traditional big three hot dog ingredients. With so many flavours that will seem foreign to a first-time visitor, just jump in and enjoy it. It’s still a hot dog! A hot dog that changed the trajectory of Vancouver’s street food scene forever. Want something a little more recognizable? Try the famous Kobe Beef Dog. Probably the finest hot dog you’ll ever know, JAPADOG use select Japanese ketchup to accent this prize. Leave your Heinz packets at home.

Now with four carts, a JAPADOG restaurant on Robson Street and even a food cart in New York City, JAPADOG is the grand daddy. Follow along with their legion of fans on Facebook and make sure you always respect your elders. Long live JAPADOG.

So that’s it, my Top 10 Vancouver Food Carts. Disagree? Feel I have made a terrible omission? Recommendations for my next review? Fire away in the comments below.