Roberto Luongo will make his much anticipated return to Rogers Arena on Thursday night. Unlike Ryan Kesler’s return earlier this season, Thursday night will be a celebration. Despite the awkward nature in which he left, Roberto Luongo is viewed by most fans as a classy professional. And rightly so.

Luongo is quite simply the greatest goalie in franchise history and is perhaps the player most responsible for bringing the team to new heights during his time here. One day his jersey will hang from the rafters of Rogers Arena too.

He had many great moments as a member of the Vancouver Canucks, but I’m going to try and narrow it down to 10 of them:

Most defining moments come in the playoffs, so you won’t see many regular season moments on this list, but Luongo’s first win in Montreal as a member of the Canucks is certainly worth mentioning.

Luongo took a Daniel Sedin wrist shot to the throat at practice on Monday, January 15, 2007. He spent the night in the intensive care unit of a Montreal hospital. He was forced to sit upright all night, barely got any sleep and wasn’t able to eat much.

But Luongo wasn’t about to miss a chance to play against his hometown team. The next night, the Canucks beat the Habs 4-0 with Luongo making 30 saves, earning the shutout.

Winning the Northwest Division became commonplace and borderline boring during Luongo’s time in Vancouver, but to quote Gary Bettman, “twas not always thus”.

The Canucks dug themselves a big hole during the 2008-09 season. Roberto Luongo was injured for nearly two months with a groin injury and the team struggled in his absence, relying on the likes of Curtis Sanford, Jason LaBarbera and a young Cory Schneider. The team lost 8 in a row in January, 5 of which included Luongo in the net, who likely rushed back to the lineup early to help the team. When the calendar turned to February, the Canucks had a paltry 22-20-8 record.

But the team caught fire in February, winning 8 of their next 9 games and carried that momentum into the final few days of the season. They were closing in on the not-yet-terrible Calgary Flames for the division title.

With 3 games remaining in the season, the Flames held a 2 point edge over the Canucks in the standings and held the tie-breaker. The Canucks beat the Flames 4-1, with Roberto Luongo making 46 saves. The Canucks proceeded to win their last two games of the season, both by a score of 1-0, with Luongo earning the shutout in both games. With three straight wins to close-out the season, the Canucks clinched the division and an easier first round opponent in the playoffs. 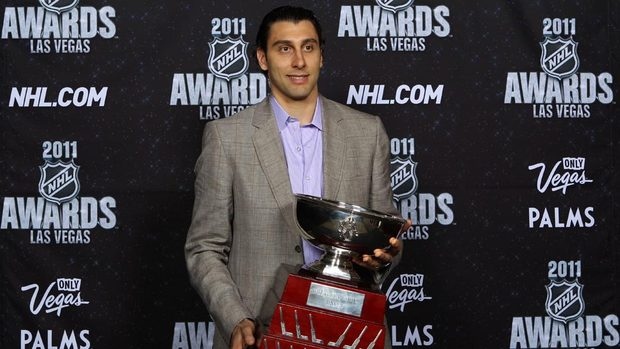 Few players in Canucks history have been in the mix for as many individual awards as Roberto Luongo has in his career. While Luongo never won a Hart or Vezina Trophy during his career in Vancouver, he probably should have.

Luongo lost the Vezina Trophy to Martin Brodeur by the narrowest of margins in 2007. In just about any other year, Luongo would have won. But in the 2006-07 season, Brodeur set career highs for wins and shutouts, and had second highest save percentage of his hall-of-fame career. Luongo probably had a better season than Brodeur, though his numbers suffered due to the team that was playing in front of him at the time.

The same year that Luongo lost out to Brodeur for the Vezina, he finished ahead of Brodeur for the Hart. Unfortunately Sidney Crosby had 120 points that year and took home the hardware.

In 2011 he took home some hardware, sharing the William M. Jennings Trophy with Cory Schneider for playing on the team with the fewest goals against given up.

The Canucks entered their playoff series against the upstart St Louis Blues as the prohibitive favourite in 2009. The Canucks likely would have won the series with good goaltending, but they were able to sweep the Blues with great goaltending.

The series against the Blues was perhaps the most dominating goaltending performance put on by Luongo, albeit not against elite competition. Luongo had a save percentage above .923 in every game and had a .961 SV% for the series as a whole. He had a shutout in game 3 and stopped 47 of 49 shots for the win in game 4.

I place a lot of value on high importance/high pressure games, and it doesn’t get much bigger than the Stanley Cup Final. Game 1 of the 2011 Stanley Cup Final against Boston was a goaltender’s duel between Roberto Luongo and Tim Thomas. The game was a 0-0 deadlock until Raffi Torres scored the game winner for the Canucks with 19 seconds left in the third period.

Luongo had zero margin for error, but turned away all 36 shots he faced by the Bruins to earn the shutout.

Luongo was spectacular in his first career playoff game in 2007. Luongo made 72 saves before Henrik Sedin scored the quadruple overtime winner to win the game 5-4.

This game sticks out for many as one of Luongo’s best ever, though it loses points given that 4 goals were given up and given defensive nature of most of the overtime periods.

Still, 72 saves is a remarkable achievement and stonewalling the Stars for 4 periods of hockey makes it one of his most memorable games ever.

Number 4 on this list is also the oddest moment in Luongo’s career. This moment is the only game on this list that ended in a Canucks loss and the only game that Luongo didn’t play the entirety of. Facing the eventual Stanley Cup champions while playing behind a team that had no business being in the second round of the playoffs with any other goaltender, Luongo was superb in game 5 in Anaheim. With the Ducks up 3-1 in the series, Luongo turned away 56 Ducks shots, many of which were grade A chances.

Of course, Canucks backup Dany Sabourin also helped out that night, turning away 5 shots in double overtime while Luongo was in bathroom. Eventually, the Ducks scored to win the game, but it’s still regarded as one of the greatest games that Luongo has ever played.

Luongo was the Canucks’ best player in the clinching game of the Western Conference Final in 2011. He stopped 54 of 56 shots against the high powered San Jose Sharks that night, allowing Kevin Bieksa to be the hero (with some help from the stanchion) midway through double overtime, sending the Canucks to the Stanley Cup Final.

This is probably the most memorable game in Canucks history. After taking a 3-0 series lead, the Canucks lost their stranglehold on the series and faced elimination in game 7 against the arch rival Chicago Blackhawks. Luongo had been lit up in game 4 and 5, and had been benched for most of game 6.

Facing the most pressure he had ever faced in his career to that point, Luongo stood tall, making 31 saves. The Canucks, and Luongo, slayed the dragon that night, winning 2-1 in overtime. Luongo’s save on Patrick Sharp during an overtime penalty kill, might be the most clutch save of his career.

Because of the way the series ended, I don’t think that this is the game that most people think of when they think of Luongo’s greatest performances, but it really stands out in my mind.

After losing game 3 and 4 badly in Boston, the Canucks were in desperate need of a win in game 5. The Canucks were beat up, playing without their best defenceman Dan Hamhuis and their 4th leading scorer Mikael Samuelsson. Their top three centres: Henrik Sedin (back), Ryan Kesler (leg) and Manny Malhotra (eye), were all playing through significant injuries. Their top offensive defenceman, Christian Ehrhoff, was playing through a shoulder injury.

If the Canucks were going to win, it would need to be on the back of Roberto Luongo. And in game 5 Luongo played the game of his life, stealing a win for the Canucks, winning 1-0. The Canucks were outplayed, but managed to get a lucky goal from Max Lapierre in the third period as Luongo turned aside all 31 shots he faced, earning the shutout.