Just when you thought family Disney films were sunshine, rainbows, and mouse ears, Tomorrowland gives us a glimpse into our future and it’s not pretty unless we do something about it.

Whoever is tired of futuristic dystopian films put up their hands? Maybe it’s just me, but these stories that are message laden with “we are killing our planet and we are all going to die” narrative, get a tad depressing after awhile. 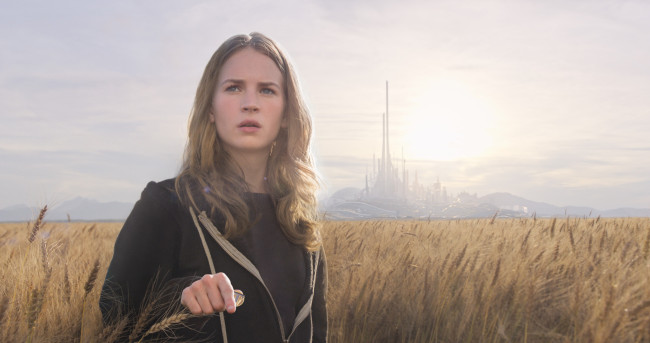 Without giving anything away, the film focuses on two characters, a former boy-genius (George Clooney), who has become a disillusioned, glass half empty type of scientist, and Casey (Britt Robertson), an optimistic and scientifically brilliant teen, who believes that the problems facing our world can be fixed. Along with their android helper Athena (Raffey Cassidy), they embark on an adventure to save a magical and futuristic world.

There was hope for this film. It had potential. It was directed by Brad Bird who gave us the animated masterpieces The Iron Giant and The Incredibles. It was also written by Damon Lindelof who wrote and co-created the television show Lost. You add an Oscar winner in George Clooney and that’s quite an all-star production.

Although the film was primarily shot in Vancouver, Enderby and Surrey here in British Columbia, it was also filmed in Alberta, Disneyland (California), and Disneyworld (Florida).

Through a vintage Tomorrowland pin, the audience gets a glimpse into an amazing futuristic and magical world that exists hidden away in another dimension far from our pedestrian world. It’s a place where scientists are rock stars and problems are solved with creativity and ingenuity.

As you get to see this perfect utopia through the eyes of our lead character, you can’t help getting sucked in, but all of that is taken away as quickly as you are introduced to it. 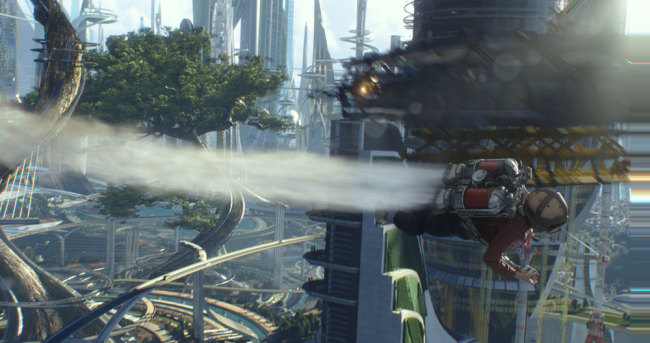 There are moments where the special effects and scenery are spectacular and kids will love the ideas of jet pack flying and going for a dip in hanging swimming pools, but unfortunately this movie includes a story that seems to plod on forever. There needed to be more awe and less long winded storytelling and dialogue.

A movie that is one hour and forty-seven-minutes shouldn’t feel three hours long and that’s a shame because there is a message that should be heard, but most kids will have already checked out after the second act.

Quick history lesson, the film was inspired by the Disney attraction Tomorrowland which can be found in most Disney parks. Mr. Walt Disney created the themed area with the idea that the future was bright and that humans would continue to innovate and move forward. 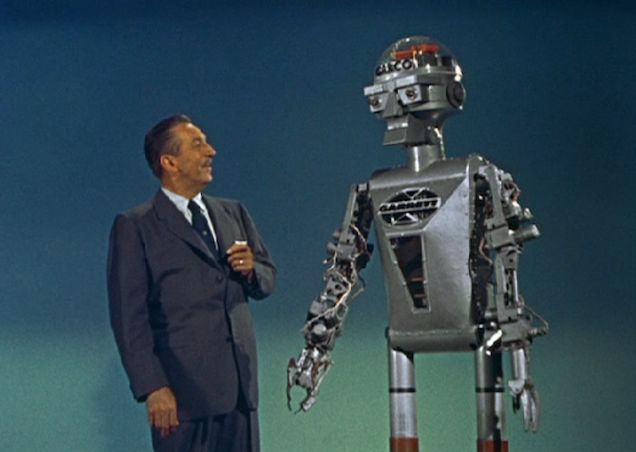 Tomorrow can be a wonderful age. Our scientists today are opening the doors of the Space Age to achievements that will benefit our children and generations to come. The Tomorrowland attractions have been designed to give you an opportunity to participate in adventures that are a living blueprint of our future. – Walt Disney

That theme does resonate in the film, and make no mistake, there are some strong acting performances and the visuals and production design are what you would expect from a big budget Disney film.

It also gets some props for having strong female characters including Britt Robertson who shines as our hero. It’s also nice to have a story about our future, that could have easily gone down the road of cynicism, instead the effort was there to give kids and families a jolt of optimism and explain that we can change our fate. 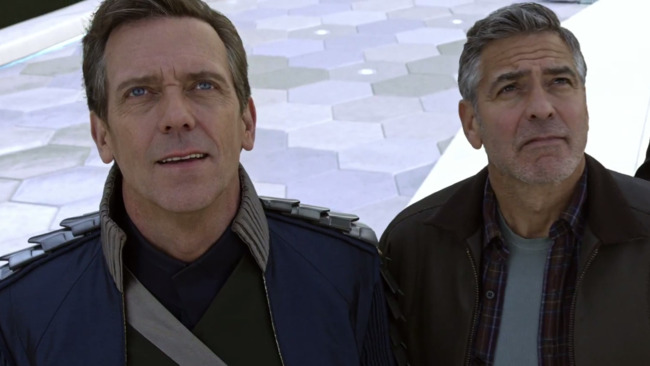 There is a great monologue at the end of the film by the evil villain Nix (Hugh Laurie) who pretty much sums everything up about how humans can see calamity coming but we do nothing about it.

The overall lesson is that not everything is doom and gloom and we can, as humans, fix our future. Director Brad Bird bangs the drum that science is here to improve our world not to profit off of the sickness. All of those noble ideas, as naive as they sound, get lost in the mess.

Any film that preaches the values of science and going out there and not accepting failure gets a hand clap from me. There is so much substance and potential in this film that it’s heart wrenching to say that Brad Bird fails at conveying it in a meaningful way.

Bird tries to do too much and everything becomes convoluted and boring. That’s a shame. Below you will watch the trailer and be excited to this family orientated science fiction flick, but don’t be fooled, the film is slow moving and not as fun as it appears.

This film only gets 3 out of 5 rain drops. The film was shot for IMAX but I was also surprised that there was no 3D. That’s not necessarily a bad thing and in some ways it’s refreshing, but this type of movie could have really benefited from some high-end 3D action and effects. Actually it could have benefited from more action in general.

In the end, I wanted to like this movie and some kids will. Is it worth seeing in the theatre? No. Save your money and wait for it to be available to watch at home. Keep in mind that Pixar’s Inside Out comes out on June 19th and that is already getting a great response from early reviews.