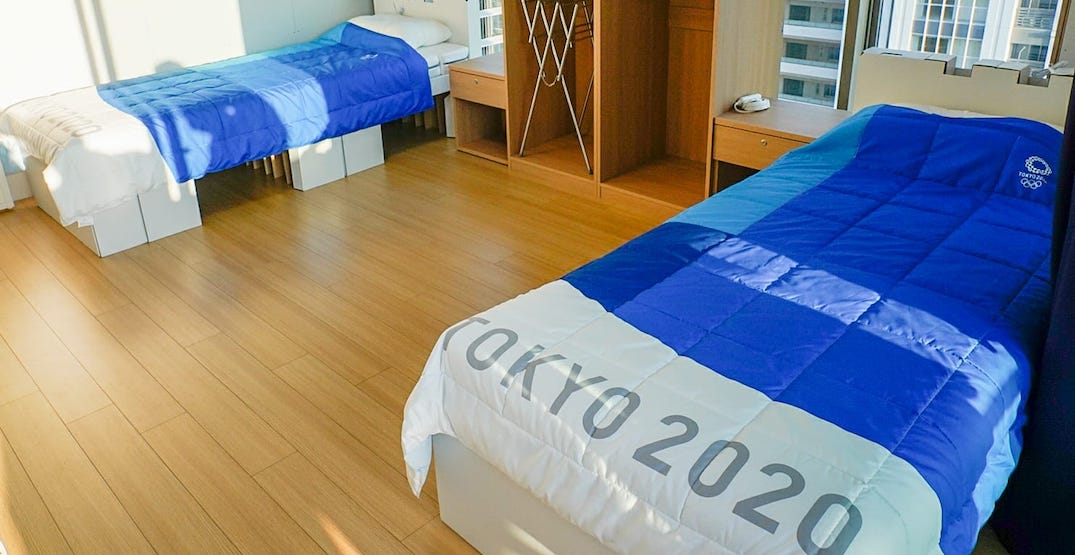 Athletes in the Olympic Village in Tokyo are sleeping on cardboard beds, and the internet filled in the blanks.

A wild rumour circulating on social media said they were “anti-sex” beds, designed to hold the weight of just one person to discourage athletes from getting too close to one another during a pandemic.

“As long as they stick to just two people in the bed, they should be strong enough to support the load,” said a spokesperson for bed manufacturer Airweave.

Irish gymnast Rhys Mcclenaghan proved the “anti-sex” claim was false by jumping on his bed in a video posted to social media.

“Anti-sex” beds at the Olympics pic.twitter.com/2jnFm6mKcB

The beds were designed with sustainability in mind, as part of an aim for an eco-friendly Olympics.

Made from “high-resistance lightweight cardboard,” the beds were unveiled in 2019 before anyone knew anything about COVID-19. The cardboard bed frames are able to support weights of up to 440 pounds.

“The design of the mattress leverages the latest innovations in bed surface technology,” Tokyo 2020 organizers said.

“It comprises three distinct sections supporting the upper, middle, and lower body, and the hardness of each section can be customized to suit each athlete’s body shape.”

The Olympics are famous for athlete promiscuity. An Olympic record of 350,000 condoms were distributed to athletes at the last Summer Games in Rio, to encourage safe sex.

Tokyo organizers are in a tough spot. They’re telling athletes to avoid unnecessary forms of physical contact due to COVID-19, but promoting safe sex is an Olympic tradition. The solution? Organizers are handing out 160,000 condoms but say they’re for use after the Olympics.