Saturday, September 15th 2012. The halfway point of the month marks the official opening of a new ceramics studio in the cultural hotbed that Chinatown is becoming. On display at DMR Ceramics at 721 Gore Avenue is a multitude of objects both functional and ornamental as you might expect to find in any ceramicist’s studio but that is where the similarity ends.  Even the most casual glance will betray a much deeper aspect to the artifacts adorning the shelves of the small yet ample space. 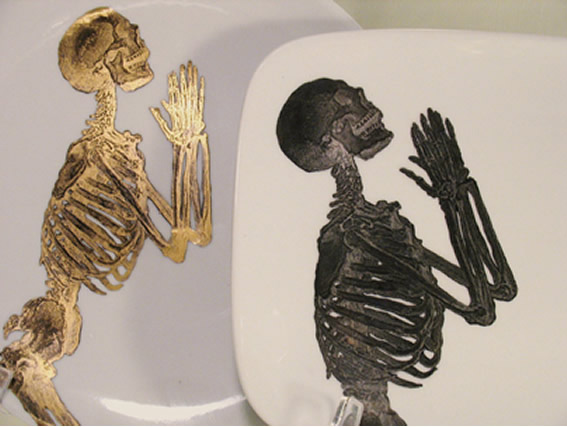 Gold and Platinum Luster over top of Iron decals of skeletons by William Cheselden.

Growing up surrounded by nature has afforded David M. Robinson a perspective many tend to miss. The first body of work being shown at the opening contains within it an attempt to convey an understanding of the intangible stuff that we perceive as inherently beautiful. Each piece is a subtle hint to a much larger and compelling subject matter: signs of divine order within nature.

In his own words, Robinson states,

“My work focuses on exploring the perfection of the organic world and how the hand of man shifts, exonerates, appropriates, and distorts that perfection. By creating objects in clean, crisp white porcelain, I afford the viewer a new interpretation of the perfection found in all natural objects that might have otherwise been overlooked. By creating new and impossible objects from components of the familiar, I am affording the viewer the opportunity to question how we interpret nature. What is our connection to the natural world and where do we fit ourselves into a matrix that has become foreign to us? My latest work consists of scale cast porcelain antlers (moose, elk, and deer) that have been reconfigured to fit an aesthetic that is familiar yet totally impossible and could never have existed in the natural world; in doing so placing a value system of ego over what is actually ‘real’ or ‘natural”’.

An average day on the sidewalk in front of DMR Ceramics sees many passersby stop in their tracks to stare at the pieces behind the storefront glass. One any given day you might see a set of porcelain human skulls, or maybe  smooth white vases bearing an uncanny resemblance to real tree branches, or maybe something like a pair of salt shakers kissing tenderly. The work at this shop spans a wide array of issues and philosophies that tempt conversation. Stick around and before long you’re likely to be greeted by a gentleman wearing clay, plaster and a genuinely warm. This is David Robinson. And indeed, everything you see and touch within the confines of his space is also David Robinson. Every piece tells a story of the world through the eyes of a man who has seen so much in such a relatively short amount of time. 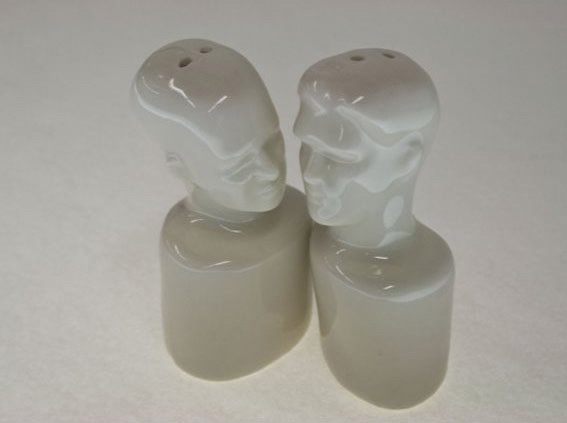 Any potter will tell you that ceramics are products of time. It takes a lot of it to produce a piece and once it is finished it lasts forever. Try your hand at making a pot and see for yourself.  Introduce yourself and you might find out about the workshops David offers for those interested in learning the art of pottery. With all this time to reflect, you may ask yourself about what divinity really is. Is it found in scripture? Is it found in the world around us? Maybe it’s found in the fruits of labor and creativity. In any case, regardless of what you come to do at DMR Ceramics you will be a part of the act of creation. Perhaps there is something in that to ponder.

721 Gore Ave. Vancouver B.C. (look for the sign on the corner of East Georgia and Gore Ave)

Ryan Nussbacher is a Vancouver based Industrial Designer and a co-founder of ooco design. When he’s not toiling away in studio or contributing to VanCity Buzz and other news sources you’ll find him doing all he can to help support Vancouver design culture from his home base in Strathcona / Chinatown.