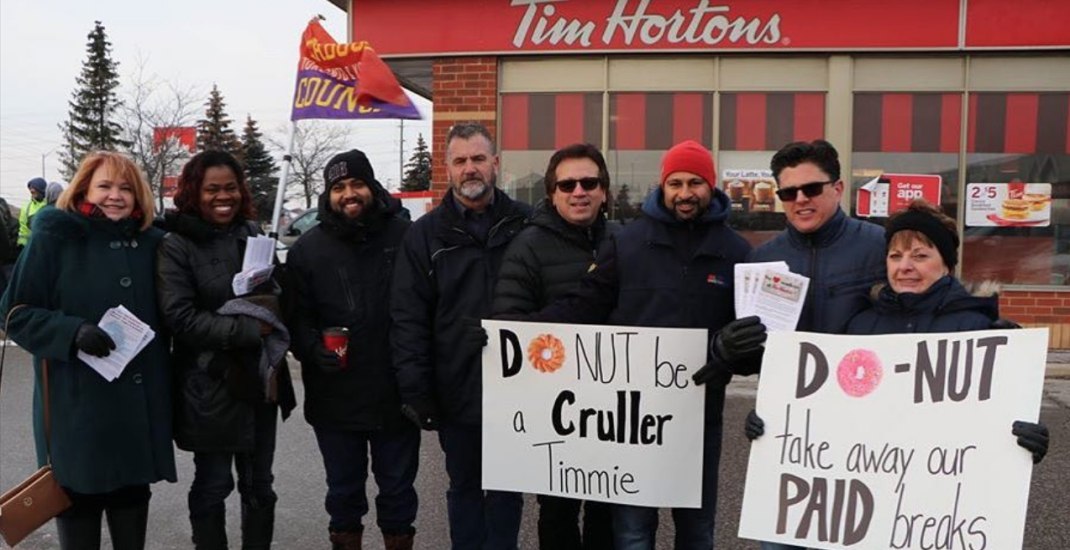 It might be a routine stop for many Canadians but today at Tim Hortons outlets across Canada, Canadians turned up for something other than a Double Double.

The Canada-wide Day of Action saw unions, workers advocacy groups, and customers rally in support of Tim Hortons’ workers’ rights as staff at some Ontario locations face cutbacks to benefits and paid breaks as franchise owners seek to offset the minimum wage increase that came into effect across the province on January 1, 2018.

Protests outside Tim Hortons began as early as 8 am in Toronto and are ongoing across the country, with the latest happening in Vancouver this evening.

See how Canada turned out to support the people that serve them coffee every day.

Shame on you #TimHortons . Rollup for fairness a Timmie. #onpoli #15andFairnes pic.twitter.com/vicnNiSspQ

Wonderful to see so many activists saying #IStandWithTimHortonsWorkers today. Over 40 rallies in Ontario, and at #timhortons across the country. We are not going to back down from this. All workers must have fair treatment whether they are in a union or not. #15andfairness pic.twitter.com/YJ3RQSivFu

East End Solidarity. Thank you to everyone who came and stood up for workers. #IStandWithTimHortonsWorkers pic.twitter.com/lok4PQCsex

@CiTRradio‘s #democracywatch is here reporting on the minimum wage protest in front of Tim Hortons at Commercial & 1st! Reporters @helloryanjones and @Sheikh_Rehmat talk to activist about #FightFor15 pic.twitter.com/XUbx1wcPhE