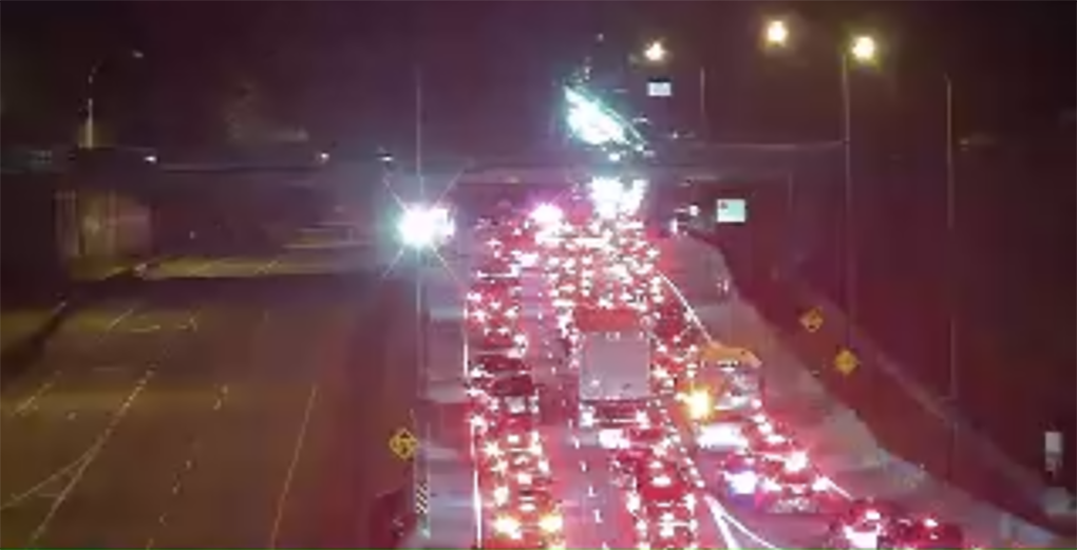 Thursday’s rush hour traffic along Hastings and the North Shore could go down as one of Vancouver’s worst traffic jams in recent history.

And sadly, that’s no exaggeration.

Traffic woes started in the early afternoon when a concrete truck rolled over on the McGill Street on-ramp at approximately 2 pm.

@AM730Traffic McGill on ramp east bound. Caused by drivers who don’t know how to merge. Truck driver risked his life to save killing idiots pic.twitter.com/ZYnhLxY2X9

As a result, eastbound traffic was closed, with several lanes of traffic reduced to one lane.

The closure remained for several hours, creating immense congestion and delays within the North Shore, even as late as 8 pm.

⚠️Heads Up – #BCHwy1 closed EB at McGill. Plan to recover the McGill onramp cement truck will divert EB traffic to the McGill/Hastings offramp and then back onto #BCHwy1. Watch for and obey traffic control personnel.
Details: https://t.co/78z5GJfWAm #SDMO #NorthVan pic.twitter.com/R0F1tZpmAT

TransLink reported issues on a number of buses both in and around North Vancouver, with delays of up to two hours.

#RiderAlert 210 Vancouver/Upper Lynn Valley is experiencing delays up to 120min due to traffic congestion. ^SB

#RiderAlert 211 Phibbs Exchange/Vancouver/Seymour is experiencing delays up to 50min due to traffic congestion. ^SB

#RiderAlert 130 Metrotown Station/Pender/Phibbs Exchange is experiencing delays up to 110min due to traffic congestion. ^SB

#RiderAlert 228 Lonsdale Quay/Lynn Valley is experiencing delays up to 100min due to traffic congestion. ^SB

Here’s a look at what some commuters had to go through during Thursday’s nightmare traffic jam.

@CityofVancouver @CityOfNorthVan
3.5 hours in traffic and not even close to getting into Vancouver.1accident causes hours of traffic. We need more ways to get to and from north Vancouver. Driving is impossible these days. Transit isn’t any better. #DoSomethingaboutthis

My God, I’m not sure why there’s such a problem with traffic in general on the North Shore here in the Vancouver area. One downed dump truck and stuck in an insane line of traffic being down to one bridge – ONE BRIDGE – for three hours and reduced Seabus. Way to go!

took me 2 hours & 20mins to reach downtown #Vancouver from the north..1 hour waiting for 240 bus & the rest of tine spent on the road due to unexplainable severe traffic congestion..🤪😼 twas a long,bumpy journey..😑#bus #road #traffic #experience #night#vancity

I never drive on Marine and Esplanade at this time – is this really what it’s like every day or did something happen on the bridge? Total parking lot. #northvan pic.twitter.com/EDf8H0yENW

I don’t understand the north shore today. Like what is wrong with this. Like over 5 accidents and it took my friend 5 hours to get from Park Royal to Iron workers area. Ridiculousness.

Sat on the same street for half an hour. Maybe vancouver traffic IS that bad.

Wtf happened on the roads today?! Follow-up question… HOW?!

Stuck on Keith road on north van since 5pm 😬😬🤦‍♀️

Traffic congestion? No it was a parking lot on the North Shore tonight from 2nd Narrows to Lonsdale!