They… they won? They won?! Vancouver Whitecaps FC defeated league-leading FC Dallas 3-0 on Saturday night by not only scoring goals but preventing goals from being scored? Oh, thank goodness.

Service has been restored. Technical difficulties are over. Situation normal.

The droughts are over.

After what felt like an eternity, the ‘Caps have now scored a goal from open play in Major League Soccer. Technically, two goals were scored from the run of play, though only the second one was scored by a Vancouver player.

We have FC Dallas to thank for the first:

Thanks, Maynor Figueroa! We appreciate you being in the wrong place at the wrong time. Special shout-out goes to goalkeeper Chris Seitz for inexplicably deciding to punch instead of claim the ball there. If Seitz holds the cross, there’s no deflection and no goal.

Before we give FC Dallas all the credit, though, it’s worth noting everything that Vancouver did right to earn that own-goal. Without Nicolás Mezquida battling in midfield to recover possesion, Kekuta Manneh using his pace to skin a defender, and both Cristian Techera and Octavio Rivero crashing into the box at top speed, there’s no sense of panic or urgency that leads to the Dallas mistake.

In short, we need to see more of this style of attack from the ‘Caps. Long-ball tactics may not be pretty but damn if a counter-attack isn’t effective when done properly.

Now, technically, while that goal was scored from open play, it wasn’t by a Whitecaps player. The drought, such as it is, continued.

Then Jordan Harvey showed up on a set piece and the overall goal-scoring drought was officially ended:

It’s good to see the ‘Caps haven’t completely lost that potency on set pieces they worked so hard to develop in 2015. There could’ve been a second set piece goal, too, had Tim Parker’s wicked header later in the second half not been blocked by a sprawling Dallas defender.

Finally, Manneh got his name officially on the scoresheet with a legitimate, honest-to-goodness goal from the run of play and all scoring droughts were officially put to rest:

Beautiful. This is why you play Manneh for a full 90 minutes.

The speedster had a favourable matchup all night up against Dallas defender Atiba Harris and it was only a matter of time before Manneh could convert on a(nother) Grade-A chance.

Nice setup by Blas Pérez, too, though I could’ve done without the theatrics. You’re 6’1″, 174lbs. of bruising target forward, Blas. There’s no way Walker Zimmerman sends you to ground that easily.

I realize the optics of Vancouver’s third goal are not the best for Octavio Rivero. Being subbed off and watching your replacement set up a goal with his first touch is not going to do wonders for one’s reputation or self-esteem.

That said, anyone with half an eye on the game saw Rivero do what Pérez was brought into this team to do (which is another conversation entirely) and do it very well. The Opta data agrees: 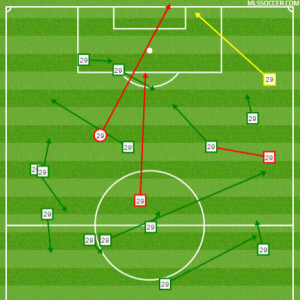 Two missed passes and one missed shot is not a bad day at the office for a forward.

Yes, that one missed shot was also Rivero’s only shot of the night. Fair point; Rivero needs to be shooting more and hitting the target when he does. The thrust of this graph, however, is that when Rivero isn’t shooting, he’s a major asset to the team.

Look at the locations for all those passes. The majority of them are well below the attacking line, indicating Rivero is busting his hump to track back and try and create chances for his team. Opta even credited him with a key pass (the yellow line), so at least somebody is taking notice of his hard work.

My favourite pass of the night – one which sadly didn’t make the highlight reels – was Rivero’s 49th minute stretch pass. You can see it in the graph above, originating from the 8 o’clock position in the midfield circle. As I recall it, Rivero was instantly swarmed by defenders (yes, defenders, plural) upon receiving the ball yet still managed to thump a lovely ball out to the flanks to start an attack.

And it all starts with Rivero drawing two(!) defenders and setting up Techera. Can’t tell me Rivero doesn’t have value. #VANvDAL #VWFC

Ultimately, the attack came to nothing because apparently Techera hasn’t met a one-on-five he doesn’t like. Oh well.

The goals and/or assists will come for Rivero. He’s doing all the right things. Results will come.

It was fantastic to see the Matías Laba of old again.

Long heralded as the midfield engine/destroyer that held the team together, Laba has been noticeably less than his usual self after a rough start to the season, likely as a result of welcoming a baby into the world. (“Babies ruin everything.” –Rituro)

Against FC Dallas, it was vintage Laba again — and not a moment too soon.

Laba back to his best again tonight

When he wasn’t delivering clutch tackles or making key clearances, Laba even chipped in with a couple of long-distance shots towards goal, recalling memories of his sensational strike against Portland:

It’s certainly not the part of Laba’s game we demand to see on a nightly basis. However, when he’s already making the central midfield a no-go zone for enemy attackers, breaking up chances, and sweeping up any loose balls, a brief flash of danger from Laba’s shooting boots just goes to show how much the ‘Caps need Laba on a nightly basis.

HOW IS DAVID OUSTED NOT THE REIGNING GOALKEEPER OF THE YEAR IN MAJOR LEAGUE SOCCER OR THE STARTING GOALKEEPER FOR DENMARK?! WHAT MORE DOES HE HAVE TO DO?!