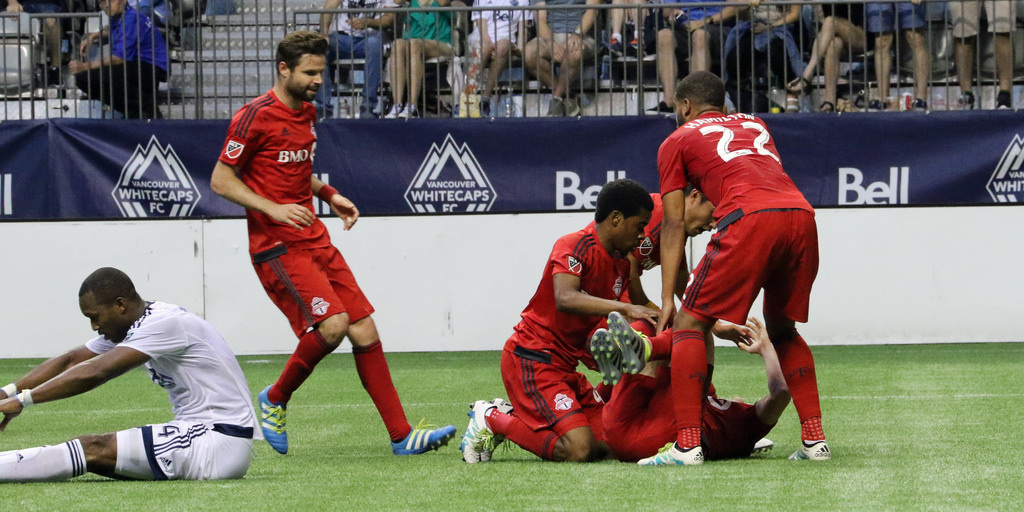 Up on the scoreboard 2-0 at BC Place (2-1 on aggregate) and with less than 30 seconds to go, the Vancouver Whitecaps and their supporters were ready to lift the Voyageurs Cup and start the celebrations for the second straight year.

That is when fate delivered a crushing blow to the Blue and White and the almost 20,000 supporters who congregated at BC Place for the match. The blow came in the form of a goal in the last play of the game by none other than Whitecaps’ arch nemesis, Will Johnson.

The goal brought Toronto FC level in aggregate score but the precious away goal in the dying seconds of the game saw them lift the trophy. The life went out of BC Place like a candle in a vacuum as thousands shared instant, collective heartbreak.

When Drew Fischer’s whistle sounded to seal the Whitecaps’ fate merely seconds later, supporters flooded to the exits. Shock was still setting in and every face was painted with disappointment and incredulity.

“Football is a cruel game sometimes, it certainly was today,” a dejected Carl Robinson declared after the match.

Many storylines can and will come out of this match but here are three that stand out.

As we have seen plenty of times with the Whitecaps, the two halves of this match were complete opposites to each other. Perhaps by design, the Blue and White played a meek first half. They controlled the ball but they lacked the urgency required to score the goals that they needed to lift the trophy.

Going to halftime Matias Laba and Russell Teibert were the Whitecaps best players. Not only did they contained Giovinco and company, but Laba recorded the half’s only shot on target.

Perhaps Carl Robinson didn’t want to open up and expose his fragile back line from the start and risk allowing a devastating away goal from the Reds? For the second half the Welsh tactician sent Nico Mezquida to the field in place of Teibert and Morales shifted back to play next to Laba.

The Whitecaps committed more bodies forward and the benefits were reaped immediately. Mezquida tied the aggregate two minutes into the second half with a beautiful header off of a fantastic cross from Jordan Harvey.

2. It ain’t over until the fat ref blows the whistle

As the Whitecaps gained momentum, the go-ahead goal was near. And indeed it came at the 68th minute, albeit from an unlikely source. Tim Parker, who was playing as a right back for this match, chested the ball inside the box and calmly sent it to the back of the net.

A classic striker finish from a hard-nosed central back. With the score now in their favour, the Whitecaps pushed for a third goal that would seal the championship. Although they created chances, such as the shot Blas Pérez rang off the post in aggregate time, the third goal did not come.

Players on the sidelines were ready to celebrate. David Ousted kicked a last goal kick and when everyone expected Drew Fischer to blow his whistle, he instead let the ball run and this happened…

Will Johnson at the end!!! CANADIAN CHAMPIONS! pic.twitter.com/C1tGpoDsGU

3. Microcosm of a season

The Whitecaps played 90 minutes that are a perfect representation of their season thus far. It was a game with sluggish and ineffective play in one half and exciting, spectacular football in the other.

It was a game where defensive solidity was bound to play a role and the Whitecaps finally seemed to have put everything together. They did. For 93 and a half minutes. But, when they needed it the most, another avoidable defensive mistake cost them dearly.

Can't put in to words how gutted I am. Nothing I wanted more then give our fans that trophy. Sorry to have let my teammates down. #wcfc

“The guys did exactly as I asked. But one goal cost us and we have to deal with it,” Robinson said. This time the defensive mistake not only cost a goal, it cost a championship. A visibly dejected Jordan Harvey declared after the game that this team is good enough to contend for MLS Cup but they need to cut the defensive mistakes.

Tonight, this team was given a painful lesson in the consequences of defensive fragility. Hopefully this will be the motivation they need to shape up and return to the defensive form that was the cornerstone of their success last season. “We have to clean up those key mistakes at very important moments of the game,” a visibly shaken defender Jordan Harvey said after the game.

So what now? Well, the Whitecaps get a few days to lick their wounds as they prepare to visit Carson, California to face the LA Galaxy at Stub Hub Center. A scenario where the Whitecaps have few fond memories.

Facing an old foe that has punished this team in the past is perhaps the best thing that could happen to this team. When the end of the season comes along, we will look back and determine if this game, this defeat, was a milestone through the campaign. It could derail them or it can galvanize them.

At this point, all we can do it hope that losing the Canadian Championship at home when it was within their grasp will re-focus this team and get them moving on an upward trajectory. Last year after lifting the Voyageurs Cup, the Whitecaps lost their form and their momentum and were unable to gain it back resulting in an early playoff exit. Perhaps losing in crushing fashion will have the opposite effect.

Time will tell but for now, embrace the pain, Whitecaps supporters, as it is, at the end of the day, part of the game.