There will be no jeering or chanting of “Our house, in the middle of BC” from the Timbers Army tonight. On a beautiful day on the west coast, Vancouver Whitecaps FC sent the reigning MLS Cup champions and Cascadian rival Portland Timbers FC packing with a 2-1 victory in front of a packed BC Place.

Robbo "we've been in a sticky patch up until now. Today we deserved what we got" #VANvPOR

Seriously, the only way to make a sun-shiny blue sky day better is to win a derby match. Okay, maybe with ice cream afterwards. Maybe.

I have been a fairly tough critic of Christian Bolaños. In short, when I see a World Cup veteran has been signed, I expect to see World Cup-level play once his boots hit the pitch. When that expectation isn’t met, I shake my head disapprovingly.

I also tend to get cranky when making guest appearances on podcasts and a certain co-host brazenly labels Bolaños the best Whitecaps player.

This afternoon’s match showcased the Bolaños I’ve been waiting to see all season and I couldn’t be happier.

That goal was a much deserved reward for Bolaños, who did everything and then some for the ‘Caps. Combined with the offensively-minded central midfield of Nicolás Mezquida and Pedro Morales (more on them in a bit), Vancouver looked potent in the attack all night.

Bolaños "we won this derby. It's important for the fans. For the city" #VANvPOR

Yes, some of the finishing – okay, more than some – was suspect. Heck, that Bolaños goal was clearly intended for Blas Pérez, who probably won’t be happier to have whiffed on a diving header.

They all count in the end, though, and you can thank the immense amount of hard work and service provided by Bolaños and friends.

“We enjoyed the game today,” said Bolaños in the post-game press conference. “Everything was perfect. We deserved to win the three points.”

2. All power to the engines

If I recall correctly, the latest episode of the From the Backline podcast featured one of the co-hosts asking for Morales to start behind Mezquida in midfield.

Ask and ye shall receive, and boy oh boy did the Vancouver captain deliver with a performance as the midfield engine powering the team in both directions.

…he also did his part on the defensive end of the ball, tracking back and making excellent tackles to the point where I honestly wondered when Matías Laba would be picking up his share of the ball-winning work.

Normally, we see Portland’s Diego Chara taking the ball off of Morales with a key tackle. Typically, it would be Laba busting a lung to prevent Timbers ace Diego Valeri from having an uncontested look at goal.

In both of those cases and more, it was Morales. Not bad for a playmaker.

3. Fraser Aird is wonderful and I will brook no dissent on the matter

Fine, maybe a bit of dissent.

Yes, Aird is still something of a liability on defence when he either overcommits to the attack or outright loses his man. There’s no reason whatsoever that Portland’s Fanendo Adi should be allowed to calmly stand unmarked in front of the Whitecaps’ goal and play a cheeky one-two to set up a goal.

Fraser Aird begins by asking "does anyone know the Raptors score?" pic.twitter.com/Yu4es0XCct

Why was Adi left open? Aird had lost Nagbe, so in came Waston to cover. Shift, shift, oops there’s now a big target forward wide open and oh look in comes defender Nat “The Beard” Borchers to knock home a gimme at the far post.

When Aird gets forward, though? My goodness. Crosses with aplomb. Pace for days. Heck, he even curled a left-footer(?!) towards goal and nearly found the near post. You cannot tell me that the ‘Caps would be better served to have Aird be less of a force on the counter.

Sure, he could maybe hit the target a bit more often with his crosses, but at this point I’ll take quantity over quality because it means we’re getting more than nothing. Nothing is bad. Something is good. 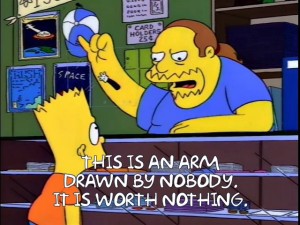 That feeling when you score your first @MLS goal.

(Notice to all soccer media: you have exhausted your “domo arigato” supplies for the year.)