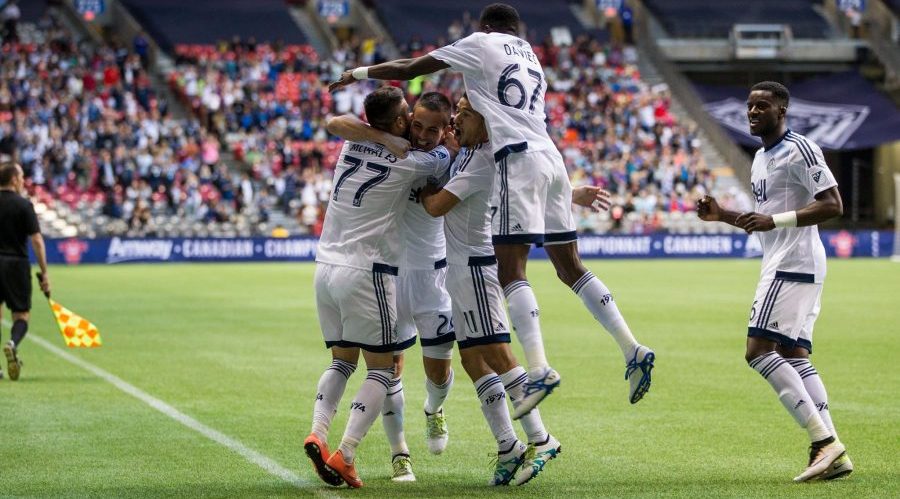 The Vancouver Whitecaps returned to BC Place and earned a deserved win in the second leg of the Amway Canadian Championship semifinal against the Ottawa Fury. Having lost the first match in the nation’s capital by a score of 2-0, the Blue and White gave themselves “a little hill to climb” as Carl Robinson declared after the game last week. And, climb they did with a nail biting 3-0 victory.

The ‘Caps required, at the minimum, to win by three goals in order to punch their ticket to the Cup final that will crown the undisputed kings of Canadian football. Toronto FC had done their part by beating the Montreal Impact with an aggregate score of 4-2, so the Reds were awaiting an opponent to be decided from the Vancouver – Ottawa match up.

Carl Robinson dressed a much more experienced line-up for the affair than in the first leg. From the young group that saw the pitch last week only goalkeeper Paolo Tornaghi, defender Tim Parker, and midfielder Nicolás Mezquida returned to the starting lineup. The Welsh tactician reinforced his troops with the addition of his three designated players, Matías Laba, Pedro Morales, and Octavio Rivero.

He also added experience to his back line with the return of Jordan Harvey and Andrew Jacobson on either side of Parker in the heart of the defence, which was rounded out by Jordan Smith who replaced an Fraser Aird. As the final piece, he sprinkled a little flair up top with Cristian Techera running on the flanks. This was easily a competitive MLS lineup.

The Whitecaps needed a fast start and ideally an early goal in order to have a chance at their ticket to the next round. The Blue and White came out flying, pressing Ottawa high and executing precise combinations in the final third.

Their efforts were rewarded early through a penalty earned by Nicolás Mezquida in the second minute of play. Pedro Morales stepped up and converted from the spot, opening the door for a Whitecaps comeback.

Such a comeback was possible thanks to three main factors.

The Whitecaps bet big on the Uruguayan trio of Rivero, Techera, and Mezquida. When the three countrymen are on the pitch together the chemistry between them is electric. It is no secret that the charruas experienced a slow start to their season in terms of goal production. However, Rivero and Mezquida were involved in all three Vancouver goals and recorded 2 goals and two assists between the two.

Rivero, who has been plagued by a scoring drought of epic proportions now has three goals in his last three starts and 2 assists.

It seems that a new era of Uruguayan renaissance is looming with the three amigos starting to hit their form. It can be argued that a lot of it stems from the opportunity to playing as a unit where they can and leverage their on-pitch understanding and convert it into goals.

Maybe Nico Mezquida drew inspiration after wearing a Mexico jersey, but who knows?

In #FTBL133 a bet was placed. Today @nico_mezquida paid up. He's a man of his word. #CopaAmerica  #MEXvURU pic.twitter.com/5Zr3uQ5nh8

Carl Robinson debuted 15-year-old Davies last week in Ottawa when he came into the match as a second half substitution. The Liberia-born player was one of the few bright spots in that match.

Robinson made a statement on the return leg by introducing Davies into his starting eleven as his other natural wingers, Bolaños and Manneh, were out on international duty and a minor knock, respectively.

Davies is now the youngest Whitecap to ever play for the first team. He played 84 minutes and the youngster played as well as a fifteen-year-old could be expected to play. He looked nervous at times, misplaced a few balls, but he also played with a maturity beyond his years. His decision-making is better than some of his older teammates in the first team and he took on opponents with the careless confidence that only a teenager can have.

We saw something special at BC Place tonight. A star was born in a Whitecaps uniform called Alphonso Davies #VWFC #WhitecapsFC

Davies is a talented player but the coaching staff will need to be careful to pace his development so that he can build a fortified foundation upon which he can construct a solid professional career.

It is well documented that the Whitecaps defensive fortitude of 2015 has been lacking in the present campaign. Individual errors and collective breakdowns have made the Blue and White defence shaky at the best of times.

In order to seal their berth to the Voyageurs Cup final it was imperative for the Blue and White to prevent Ottawa from scoring a valuable away goal. The defensive ranks composed of Tornaghi in net, Jordan Smith, Andrew Jacobson, Tim Parker, Jordan Harvey and Matías Laba were up to the challenge.

The Whitecaps limited the Fury’s chances to a minimum and, while nervy minutes were transpiring in the last 15 minutes of the match, Ottawa never really had a clear opportunity to add any goals to their tally.

This was, perhaps, the perfect game to jumpstart the Whitecaps on both ends of the pitch, but, for now they will have to wait until June 18 to return to action when they will face the New England Revolution at BC Place before flying to Toronto to face TFC on the first leg of the Canadian Championship on June 21st.