The last time a rookie got the city this excited was when a young Cody Hodgson sent a clapper, bar down, behind a startled Tim Thomas. While that was the height of Cody’s Vancouver career, another young man  has emerged from the shadows to take the city by storm. His name? Jason King.

Before we begin cheering on Horvat, let’s get a couple of things out of the way. 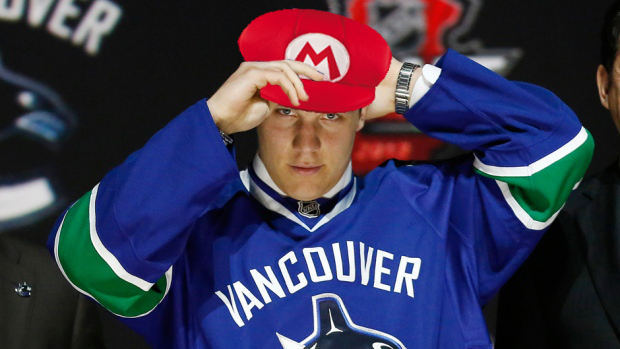 Now, that isn’t to say these articles are wrong, stupid, overly critical, what have you. Like many things in sports, it’s just a healthy debate, and there is good material to be found in there. I am not advocating you bury your head in the sand and ignore the fact every single Canuck might not end up reaching their full potential. You shouldn’t be telling your friends that Crosby better watch out because Bo Ho is coming for his soul.

That doesn’t mean, however, you cannot enjoy Horvat while he turns into whatever player he is to become. It doesn’t mean you can’t enjoy watching him score goals greasier than two Big Macs deep fried in batter. For all the clarity advanced stats people can bring to the sporting world, sometimes they forget to have fun. This is why we are going to ignore the burden of the future and simply enjoy Horvat for the next 5-10 minutes, depending on your reading speed.

And yes, I fully expect somebody to e-mail me a thesis on how advanced stats are fun, and that my idea of fun is in fact not fun at all, and in fact, is the leading cause of death and illness in the world.

He gets really dirty goals. The kind of goals that you write to Penthouse about.

I went to work today and you’ll never guess what happened. I went to the net hard, and I put my puck inside of it. Twice.”

Now, there are many reasons dirty goals are appreciated by a hockey loving crowd. One, it’s a very basic goal. It brings us all back to our childhoods when all we could do was swing our sticks at the puck until it slowly trickled in past the poor sap who got thrown in net. It’s a very primal experience. This is why a nice dangle makes us do this:

Versus a dirty goal which makes us do this:

The nice dangle goals kind of upset us because we are almost offended they scored such a nice goal. It’s as if they are showing off to us, telling us “You couldn’t do this on your best day.” Which is true, but I mean, come on, don’t rub our faces in it. Like, we appreciate the dangles, but we still have to pretend to not be too impressed.

The dirty goal, though? We can all do that. We’ve all gotten our greasy goals in our lives. We can visualize it, and we can taste it, and it’s delicious. Ask somebody to tell you a story about their favorite dirty goal, and odds are they will act it out for you. Canadians just love embracing the dirty hockey life. It’s very workmanlike and unassuming.

And it’s not only the dirty goals. Bo doesn’t shy away from physical contact, either. Remember the Boston game? Bo went straight at Chara and didn’t back down an inch. He even managed to knock Chara down at one point, and stripped him of the puck a moment later. If that doesn’t make you high five your buddy beside you, you are dead inside, my friend.

He’s a teenager who not only made the team, but is contributing deep into the season. There is something far more satisfying seeing a player perform well down the stretch versus being the Brian Savage of the team and dominating in October. With 25 games left, if he gets 13 points, he’ll have himself a nice 30 point season. Vancouver doesn’t exactly have a long history of young forwards coming in and making an impact (Cody, you were supposed to be the chosen one!), so it’s always exciting when a young player performs here.

With the team’s aging core heading into the sunset (ie. signing with Florida in 3-5 years), we’ve heard an awful lot of talk about getting the young players into the lineup. For the most part, it hasn’t really happened. Zack Kassian is too busy getting healthy scratched for his hippy sideburns, and guys like Corrado have had to wait for injuries to get back into the lineup (only to get injured himself, thus setting up a vicious cycle of young guys injuring themselves, thus allowing more young guys into the lineup).

Jake Virtanen is still too far away to tell how good he’ll be (if he ever survives the “We should have drafted Ehlers” war that we get to enjoy for the next 5-10 years), and the same with McCann. Brendan Gaunce has his coaches raving about his play in Utica, but he won’t see anything until next year, if that. Shinkaruk is still rebounding from his hip surgery so it’s hard to get a read on him.

Basically Bo Horvat is the one guy currently showing that there might be life after the Sedins, which is a nice reminder to get now and then.

Cody was kind of an enigma in Vancouver. He was always off the radar. He never talked much, we just heard vague jokes about the guys calling him the team doctor and stories about him acting above his role of a rookie. When Cody was first drafted, people did the same thing they’re doing with Bo. “Next captain right there!” we exclaimed as Cody would talk about giving it 110%. A few years later, and all we were left with were stories of intrusive fathers, fractured relationships, and demands for more ice time.

With Bo, it’s hard to see him going down that road. Of course, anything is possible, but many of the warning signs we had with Cody simply aren’t there with Bo. For one, Bo is happy playing in the fourth line role. He is ok with forgoing the fancier goals he scored in junior, and instead is grinding out the dirty goals.

He’s also committed himself to defense. That’s not to say he’s an expert in the field, there are still several times where he gets lost in his own zone, but the effort level is there. He’s always trying to play his ass off in his own zone. With Cody, he would play Harry Potter defense, which involved him waving his stick at the opposition and praying they’d trip and fall down. Occasionally he would scream “Expecto Defensus” to no avail.

Lastly, and this is no fault of Cody’s, but there was no year of stunted development (knock on wood) for Bo Horvat due to an injury. Cody’s back injury, and Alain Vigneault’s awesome bedside manner we all know and love, only added to the divide between club and player. With Bo, all we have is a nice video on YouTube of him making the team.

In summary, we don’t know what kind of player Bo Horvat will end up as in his career. But the last 11 games have been damn fun to watch, and have made thinking about the Canucks future more palatable. That is why Bo Horvat gets the three cheers of the week.