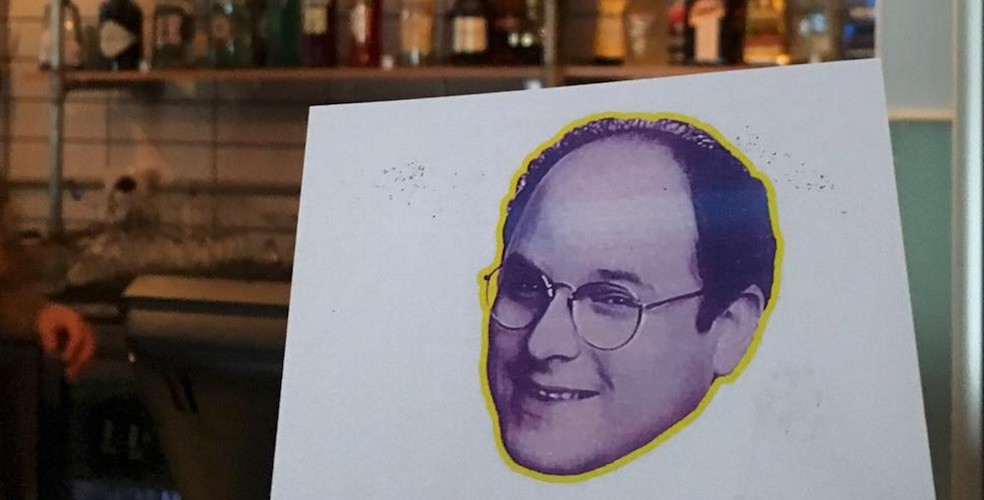 A bar dedicated to the “Lord of the idiots” himself, Seinfeld character George Costanza, has opened its doors just a few days ago. Alas, for Vancouverites eager to have a snack and some drinks in a spot that honours one of TV’s favourite neurotics, the bar is located in Melbourne, Australia.

Called, appropriately, George’s Bar, the dive-y joint boasts minimalist (perhaps a nod to Costanza-esque laziness) decor–think lots of Costanza quotes and plenty of his face–and a menu of cocktails and toasted sandwiches (the Aussies call “toasties”) with jokey names based on the show and character.

And, yes, they’re getting a Frogger game installed.

The Sydney Morning Herald reports that George’s Bar came out of the owners’ love of Seinfeld. Co-owner and operator Dave Barrett notes there are a ton of autographed photos on their way, and they’re collaborating with a Melbourne artist doing painted portraits of Costanza.

All of this hubbub about George and the tribute bar has locals talking (and showing up) but the best endorsement of all came from actor Jason Alexander, who tweeted:

That’s right – I may not have an Emmy, but I got me a bar in Melbourne, Australia. G’day, mates.

So if you’d like to “Be more like George,” as the self-proclaimed dive bar’s motto suggests, pack your bags and sense of humour and head to Melbourne’s Fitzroy neighbourhood. No word on how nice the bathrooms are, or if they’ve got pretzels that make you thirsty. Check out some fans’ snaps from the bar:

One Marisa Tomei thanks.

First visit to the new George Costanza bar. These pretzels….ARE MAKING ME THIRSTY!

The only thing Melbourne was lacking was a Seinfeld themed bar. Not any more! #bestever #seinfeld #george #jerry #kramer #elaine #larrydavid

This is a George Costanza-themed bar I love you Fitzroy