Judith Thompson is a natural storyteller, her performance look effortless. In the first compelling monologue she has the audience on the edge of our seats, but throughout the show the interweaving monologues don’t come together as much as they should.

Watching Glory Die takes a bold leap from recent headlines to forge the visceral lyricism that is the hallmark of Judith Thompson at her most powerful. A riveting yet deeply compassionate portrait of three women — Glory, a chronically disturbed young offender; Rosellen, the girl’s mother; and Gail, a prison guard — inextricably linked by shared helplessness in the face of tragedy.

The sad reality of this production is that it is based on the real story of Ashley Smith, an 18-year-old woman from New Brunswick who in 2007 strangled herself in her cell, while the guards videotaped. She was pronounced dead, 45 minutes later when the guards finally entered her cell (they were under strict orders not to enter until Smith stopped breathing). Originally slated for one month in juvenile detention, her stay was continually extended to reach an eventual 5 years. 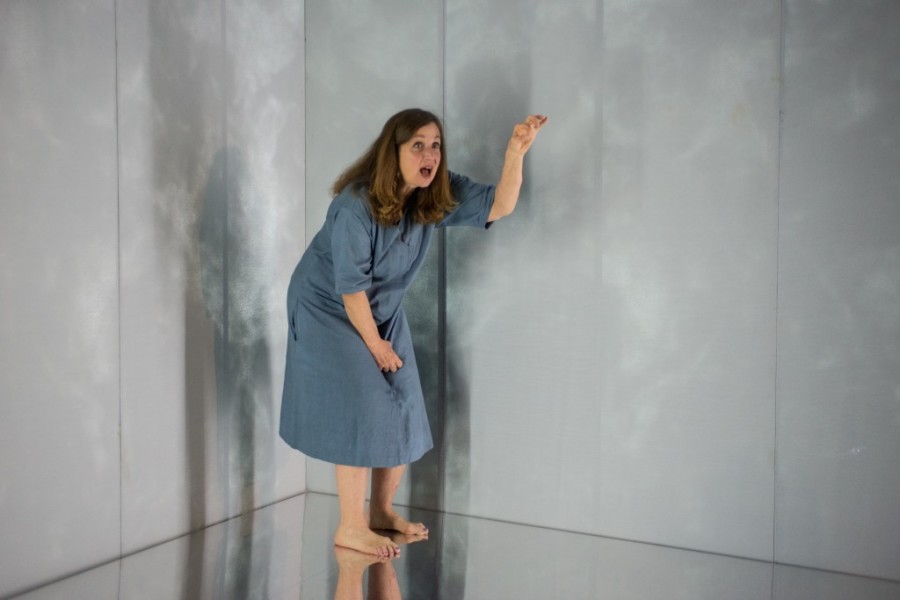 Playwright Judith Thompson takes on the roles of all three characters. Thompson’s playing of Gail the corrections officer is the most spot-on of all three characters. As she tells her story it is hard not to sympathize with her, easy to shake our heads and condemn her for just ‘following orders’. On the other hand, the character of Glory is so erratic and out-there, it was hard to relate to her. It’s even harder to reconcile the image her mother Rosellen describes her as (sweet, lovely, wouldn’t hurt a fly) with the woman we see locked in the cell. Was this on purpose? Are we meant to see these characters as people with wool pulled over their eyes, lying to themselves about the truth? I’m not sure.

I felt myself wishing we could stay with each character for longer periods of time, instead of flitting from one to the next. Each time the character of Rosellen appears, Thompson puts on her sandals and cardigan, and sits down at her kitchen chair. Before long the shoes are coming off again and we are moving on, back to Glory or Rosellen. Instead of scenes that just scratch the surface I would have loved to see a more in depth look into each character; not counting the touching emotional moment when Rosellen describes how if she could she would grow wings and fly to rescue her daughter from her prison cell.

Set designer Astrid Jansen & projection designer Cameron Davis successfully create a set that is more-than-meets-the-eye; a blank prison cell with a wall mounted camera that projects live black and white video of Glory onto the walls, as well as imagery that reflects the characters inner demons, visions and nightmares.

It is important to hear these stories, and to remember people like Ashley Smith. This is a story about injustice, about our most marginalized people. I just wish this production in particular had been as compelling as it meant to be.

“Watching Glory Die” runs from April 22 – May 3 at 8pm, April 27 matinee at 2pm at The Historic Theatre at The Cultch. Tickets can be purchased here.